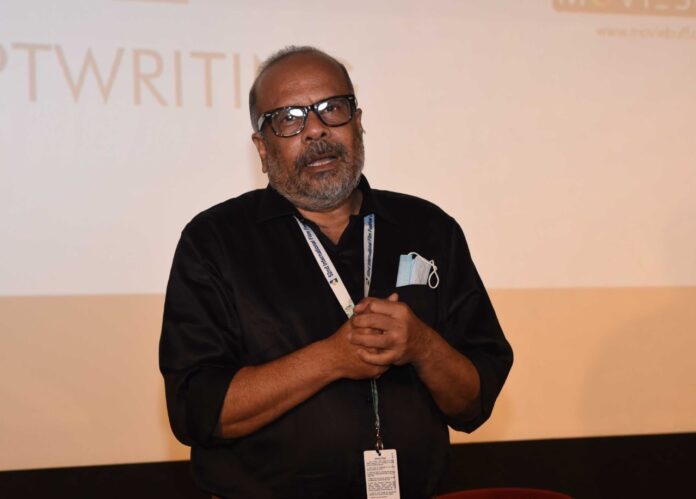 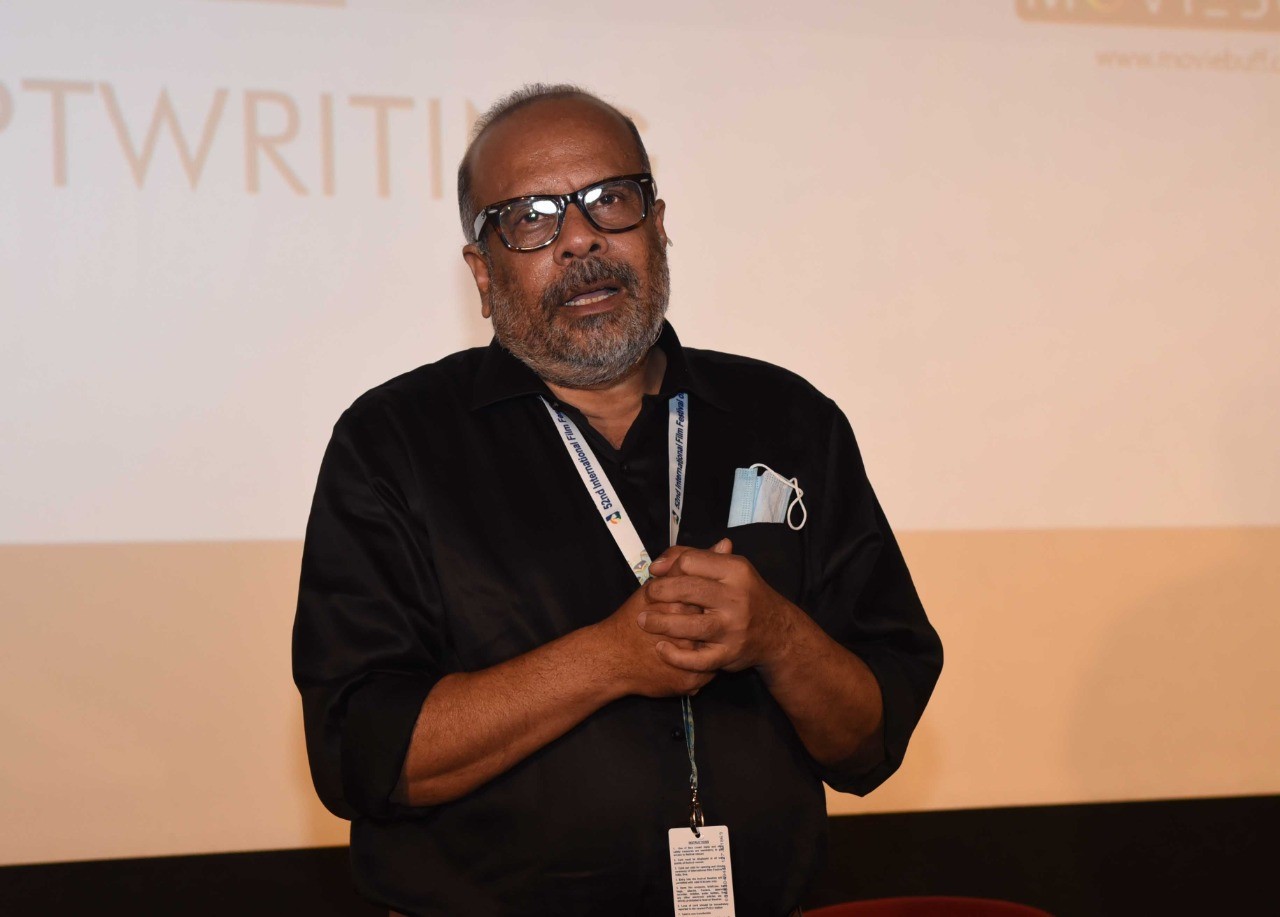 Stories are linear, screenplay can be non-linear; screenplay is only a design to tell an audio-visual story on the screen, says Edathattil

Panaji , Good stories are those that inspire us. Yes, master screenwriter Sab John Edathattil says stories should inspire the audience. “A story is not interesting if it is about the things we want but get easily. It is about the journey of the characters, about their struggles. For example, if the story goes like, “I want to marry a rose, so I married a rose”, is it interesting? Not at all. So, the story has to be about the conundrum of life and its various crises.” Edathattil was addressing a Masterclass on Scriptwriting yesterday, November 25, 2021, during the 52nd edition of the International Film Festival of India, being held in Goa in a hybrid format, during November 20-28, 2021. The masterclass was attended in person by IFFI delegates in Goa, and was also attended online by virtual delegates who watched it on the virtual platform of the festival https://virtual.iffigoa.org/ .

Known for his work in films like Chanakyan and Gunaa, Edathattil the leading screenplay writer of South India spoke to the young and aspiring filmmakers and cine lovers at IFFI, and shared many tips and ideas on the art of storytelling.

He gave a finegrained understanding of the process of storytelling and how it can help engage the audience. “When you are writing characters of a story, relatability and curiosity make the characters interested in and engaging for the audience. Audience are the people who are most benevolent to the writers; at the same time, what you create has to be convincing to them.” 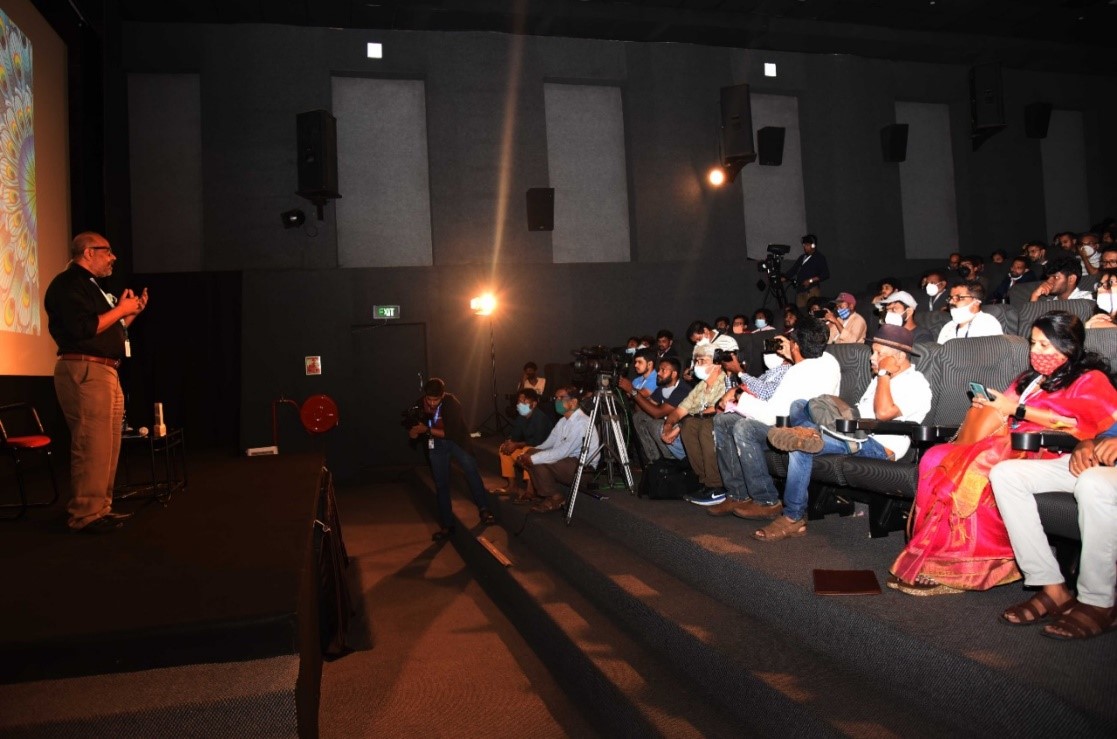 He pointed out that the backstory is also vital for developing characters. “We all carry baggages; they mould our characters. It is essential to create a good backstory for good storytelling.”

The noted screenwriter said that for creating content which stays with the audience, which they will take with them, a writer has to write from the heart. “If the audience recalls and relates to the story, it is the ultimate testament to the power of writing.”

Edathattil observed that we can write a story only when we get emotionally stimulated. “When we start writing a story, our mind is a blank page. The problem is we have to arrive at what to write. Only when we get stimulated by certain emotions, we can write a story and ultimately, those emotions appeal to the audience. The value of stories depends on how it affects the audience.  This value can be both positive and negative. “

There are no rules, only principles; but direction is important, he said.  “One should have direction while writing a story. Without direction, it is often a futile attempt.”

He reminded film delegates that writing a story is not just about good language. “Most writers think that if you have a command over language, then you can easily write a story. But we need to have knowledge of the story. There are various elements to a story like the story itself, likability of characters and an effective structure.”

How do we connect with stories? Edathattil explains. “Why do we love stories? How can you connect with a story if you are trying to escape from life? We connect stories with life. As we move forward in life, we develop a perspective on it. We may not know each other’s stories, but when someone tells a story, we get an insight into their life. That’s how we form a connection to the stories.”

Edathattil pointed out the basic way in which stories differ from screenplays. “We believe that when we tell or write something, that is a story, but screenplays are not stories. Screenplay is only a design to tell an audio-visual story on the screen. This is the fundamental difference between a story and a screenplay.”

Stories are linear, but screenplay can be different, he said. “All stories by default are linear because life is linear. We can’t start our life with marriage or death. So there is a beginning, a middle and an end in our spoken or written stories. But, while writing a screenplay, one can adapt it to a non-linear structure. Many say that classical screenplay is a cliché. But it is also the most used and most successful form of screenplay.”