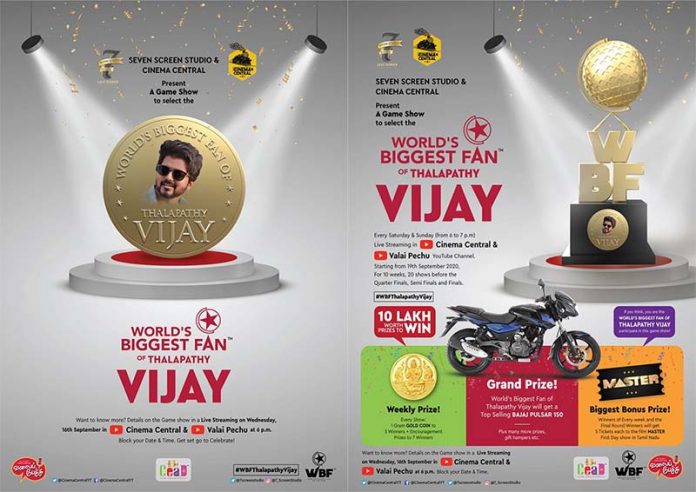 Chennai,September 16, 2020: Seven Screen Studio, Lalit Kumar, Producer of mega budget films like ‘Master’, ‘Cobra’, ‘Thuklak Darbar’ and CinemaCentral YouTube Channel today announcedthe launch of a big Online Game Show to select the WORLD’S BIGGEST FAN OF THALAPATHY VIJAY, commencing from September19, 2020 through Live Stream at 6 p.m. The game show is on Thalapathy Vijay’sfilms, his likes, views and speeches. The game show is primarily targeted atmillions of Vijay’s fans, who love him and make social media trending out ofevery news on Vijay. The game show is conceived and executed by CEAD Film Consultancy Team headed by Dr.G. Dhananjayan for Seven ScreenStudio-Lalit Kumar and Cinema Central YouTube channel. The idea of the gameshow is to engage, entertain and connect with millions of fans of Vijay throughthis program and select the World’s Biggest Fan of Vijay, who knows everythingabout Thalapathy Vijay.The game show will be streamed live everyweekend (Saturday and Sunday) at 6 p.m from 19th September for 10weeks (total 20 episodes) followed by quarter final, semi-final and final roundto select the winners. This Game show will be streamed live in thepopular YouTube Channels Valai Pechu andCinema Central, in addition toTwitter IDs of Dhananjayang and CinemaCentralYT (Periscope) at the sametime (6 p.m) for everyone to participate from wherever they are. The game showis for millions of fans of Vijay across the world and not restricted to onlyTamil Nadu and everyone can participate in the game show.Each episode will have 10 questions fromthe anchor and the participants need to answer them at the end of the programby messaging to a WhatsApp Chatbot Numberdisplayed, at the end of each episode. The participants are given 5 minutes toanswer the 10 questions at the end of the program and after that no entry shallbe accepted by the system.There will be winners in each Episode,followed by quarter, semi and final rounds. The following are the Prize details,worth totalof Rs.10 Lakhs.Thereis no entry fee or condition attached to participate in this Game Show. 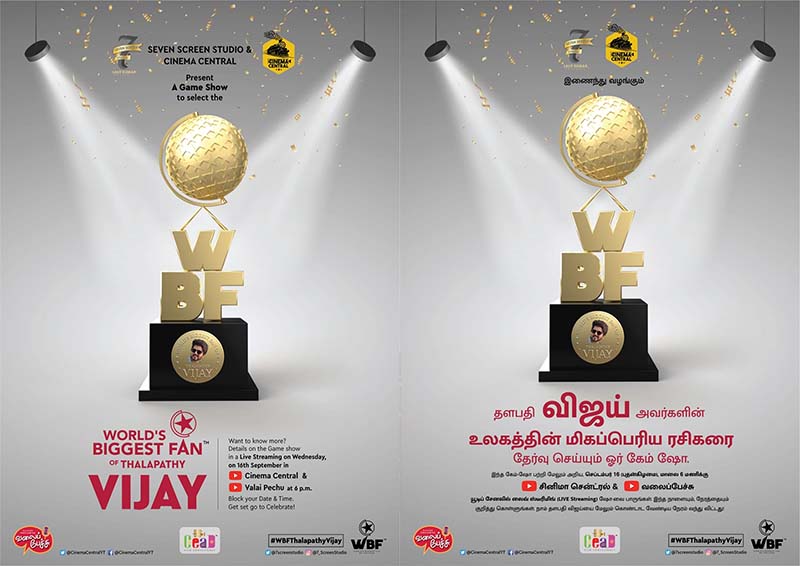 Anyone, who love Thalapathy Vijay can participate in the Game showand the winners will be chosen based on their entry.

One person can send only one entry. Multiple entries by the same personshall not be considered and all will be rejected. All that you need to dois watch the Live Streamed episode of the Game Show and answer the 10 questionsat the end of the episode by sending your entry to the WhatsApp Chatbot Numberdisplayed. 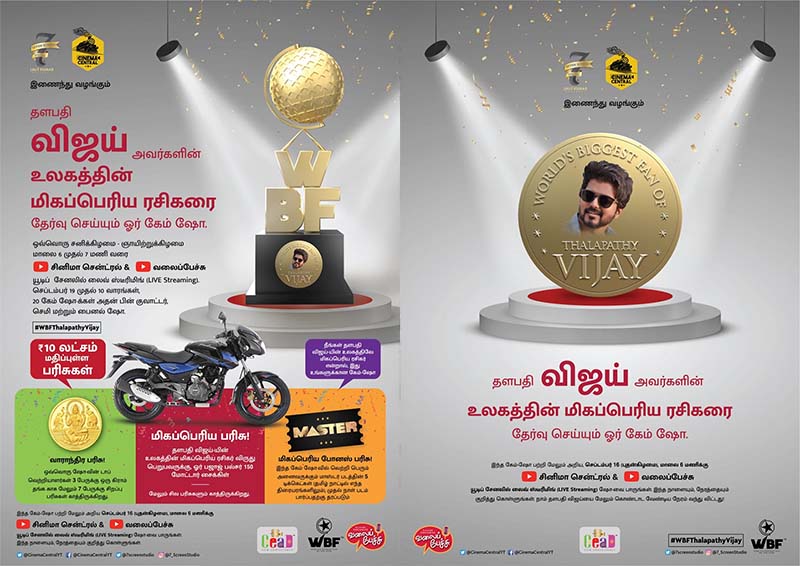