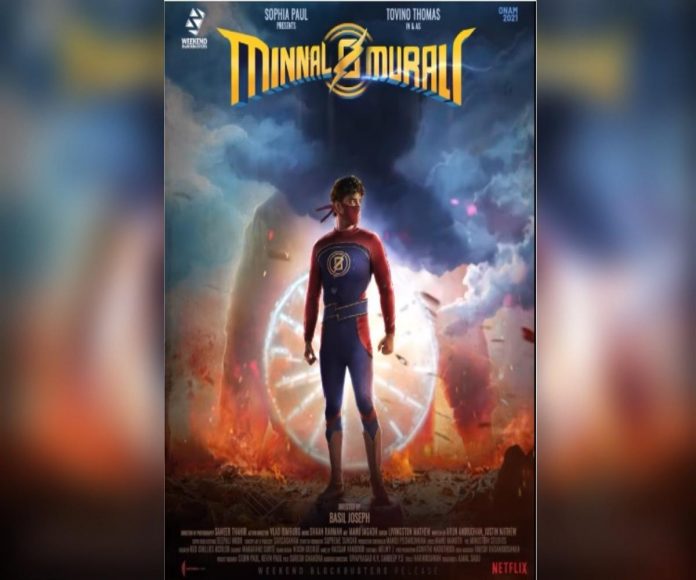 NETFLIX ANNOUNCES ITS UPCOMING MALAYALAM FILM, MINNAL MURALI TOVINO THOMAS WILL STRIKE LIKE LIGHTNING IN THIS MOST AWAITED SUPERHERO FILM

Mumbai, Supernatural strength, and using it to fight evil and to save the world – who doesn’t love superheroes? ‘Minnal Murali’, one of the most awaited Malayalam films of the year, will premiere worldwide as a Netflix Film. Produced by Weekend Blockbusters (Sophia Paul), the action flick Minnal Murali is directed by Basil Joseph.

The upcoming superhero film will see Malayalam icon, Tovino Thomas as the superhero ‘Minnal Murali,’ which is a story of an ordinary man -turned-superhero Murali, who is struck by a bolt of lightning, which bestows him with special powers. The film also stars Guru Somasundaram, Harisree Ashokan and Aju Varghese in pivotal roles. Giving fans the chance to meet their new favorite superhero, the film will premiere with dubs in Tamil, Telugu, Kannada, Hindi and English.

Sharing his excitement about the film, Director Basil Joseph said: “We wanted to create a superhero that people could relate to and connect with on an emotional level. Though the essence of a superhero movie is the action, our genuine efforts were focused on having a strong narrative that could stand on its own while backing the action. The film is going to be a really exciting one and I am looking forward to the release. It has been a dream project for the entire team and I am glad that the film is releasing on Netflix.”

Talking about the production of the film Sophia Paul from Weekend Blockbusters said,“As a producer, this was my most challenging yet gratifying experience. I am proud of this journey. We brought together the best team of actors, technicians and platforms for the rise of this ‘local’ superhero – Minnal Murali. This superhero movie transcends languages, as at the core, it’s a human story of emotions and circumstances. I am thrilled and proud of Minnal Murali.

I am glad that we got an opportunity to join hands with Netflix on their upcoming Malayalam film. Minnal Murali is just the  beginning. We are just getting started.”

Looking back at the experience of canvassing Minnal Murali, Tovino Thomas said, “I’ve been attached and committed to the character of Minnal Murali from the very beginning. I spent all my time communicating with my director to ensure the best possible outcome and immense amounts of work went into creating Minnal Murali. I’ve learnt a lot and I’m grateful that during these strange times, people can still appreciate cinema from the comfort of their homes through Netflix. I hope everyone who watches the film loves Minnal Murali just as much as I do.“

Pratiksha Rao, Director, Films and Licensing, Netflix India said, “Malayalam cinema has gripped the audiences with innovative storytelling and incredible filmmaking craft. As we expand our film slate to include more diverse Malayalam stories, we are excited to bring the widely anticipated, Minnal Murali as a Netflix Film. This must-see local superhero story, starring Tovino Thomas, will move and entertain audiences everywhere.”