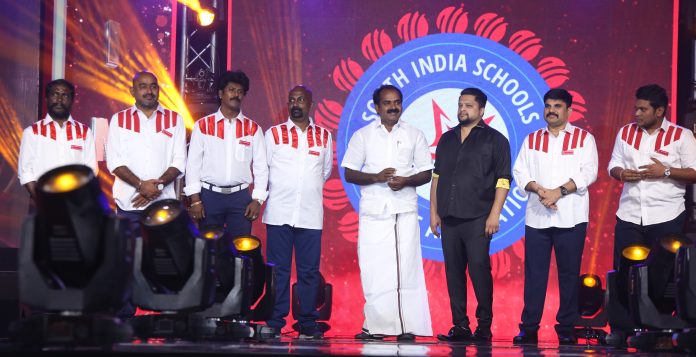 Honorary Sports Minister Mr. Siva Meiyanathan graced the occasion of The Grand launch of South India Schools Cricket Associations (SISCA) and administered the swearing in ceremony of John Amalan as it’s president along with other members of the committee. Honorary sports minister Mr. Siva Meiyanathan  has been awarded  “Outstanding contribution for sports development” by Indian awards 2022 and it was presented to him by Mr. Vijay Vasanth M.P and John Amalan.

INDIA, although the most secular country in the world – binds its people by ONE religion – CRICKET. From revered national and international players to playing in the streets – it is a dream of millions to hit a six for the nation one day. However, many young players find it difficult to enter the sport despite their exceeding talent – the prime reason being lack of proper guidance and knowledge about the procedure to showcase their performance to the next level.

Hence, in an attempt to bring the golden opportunity to every young player, South India Schools Cricket Associations (SISCA) has emerged as a platform to take the talented ones to the next phase and develop their skills to participate in National level tournaments.

Further, the organization will develop a separate wing for young girls and women with complete provision of special training and guidance, for rapid advancement in the future of women’s cricket in India

The launch of the event happened on 16th August at ITC Chola.

Mrs. Sneha Nair has been selected as the Honorary President of SISCA which was created with the aim of encouraging youngsters to shine in the world of cricket at school age.

Pradeepkumar has been selected as the General Secretary and Joshua Edison has been selected as Secretary along with Kudanthai Ashraf as the Treasurer. Also, Dr. APJ Abdul Kalam’s grandson and the Co Founder of Dr. APJ Abdul Kalam International Foundation – APJMJ Shaikh Saleem, has been chosen as Honorary President, Mr. Vignesh  as President and Mr. Kanmani Pandian as the vice President of Tamil Nadu School Cricket Federation (affiliated to SISCA). All the selected executives officially took oath in the swearing ceremony administered by our Honorary sports Minister Mr. Siva Meyyanathan.

The ceremonious event was graced by the celebrities of South Indian Film fraternity,  Govt officials, Eminent political leaders, Consulate Generals of eleven countries and other dignitaries.

I’m glad to have launched the South India School Cricket Association (SISCA) on the stage of Indian Awards 2022. Our honorable Chief Minister Mr. M. K. Stalin have gone to great lengths in the recent years to create more opportunities for sports. It was highly evident when the TN Govt hosted the 44th CHESS OLYMPIAD in Tamil Nadu and made the event a grand success. The event opening ceremony  was graced by our honorable Tamilnadu Chief Minister Mr. M. K. Stalin and our nation’s Prime Minister honorable Mr. Narendra Modi. This event has brought in the world’s attention towards Tamilnadu.  We taught them about the hospitality, our culture and our food.

Following it when John Amalan came to us with the idea of starting a school to support sports we were happy to extend our support to them in all means. A sport is the means to bring solutions to all the problems around us. Sports is the only means to guide our youth in the right direction.

A locality with a playground doesn’t need a hospital. A place where you have playgrounds doesn’t have communal riots. Our Chief Minister is well aware of it. When Neerav Chopra won Gold in Olympics every single person in our nation felt like we won the Gold. Sport s has the ability to bring in the unity among us.

When these youngsters have taken such a huge initiative we are all but happy for such a great deed. We from the TamilNadu Government wish them to take it forward and succeed.