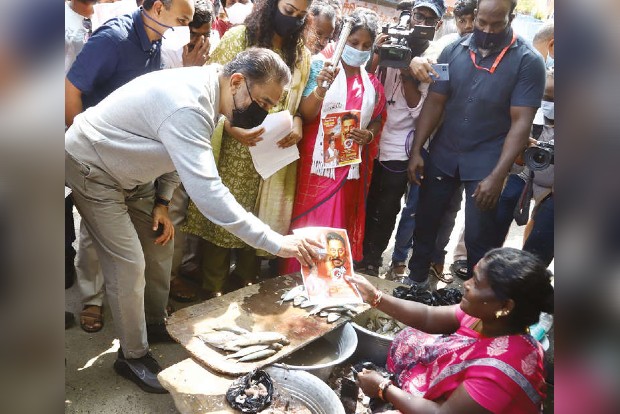 Chennai: Makkal Needhi Maiam founder-president Kamal Haasan on Sunday accused the Governor RN Ravi of acting as an agent taking instructions from the Centre and wondered whether India becomes a republic to replace East India Company with North India Company.

“We have a strong opinion and you should respect us. You (Governor) should not act as an agent. Did we become a republic throwing out East India Company and letting the North India Company rule us? All attempts are being made to violate the promise given to us that all are rulers of this country. We will oppose this,” Kamal said, responding to a question on his party’s stand on Governor returning the anti-NEET bill.

When asked why MNM is contesting in only 1,338 seats in the urban local body polls, Kamal said that his party has fielded candidates in the wards where it has winning chances. “We are not living in a dream. We know our strengths and we are contesting in those seats alone,” he said. He also said that people are not happy with the 8-months-old DMK government and accused both the Dravidian parties of corruption.

He was speaking to reporters after meeting his party’s candidates for the Greater Chennai Corporation. The party candidates took a 12-point oath stating that they would face the polls in an honest way and would ensure the holding of area sabhas and ward committee meetings. They promised not to take bribes from the public.

Earlier, Kamal launched his campaign by canvassing in support of his party candidate Maala in ward 123 (Mandaveli Visalakshi Thottam) of the Greater Chennai Corporation. The actor-politician who was given a rousing reception by his party cadres distributed pamphlets and interacted with the voters. Some women voters urged the actor to support their demand for permanent houses.