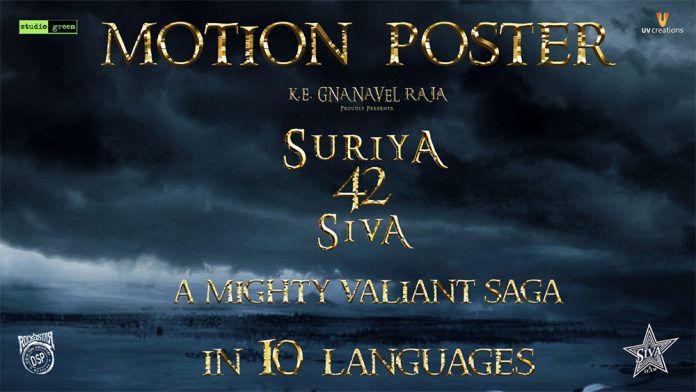 South Superstar Suriya, who recently won the national award for best actor for Soorarai Pottru & been nominated as a Jury member to the prestigious Oscar Academy, is now collaborating with director Siva for his next project. Studio Green & UV Creations are producing the film. Vamsi Krishna, Pramod & KE Gnanavelraja are the Producers. This project is tentatively titled Suriya 42 and it commenced the shoot recently.

The makers unveiled the motion poster of Suriya 42 a short while ago and it carries an intense vibe and it gives a glimpse of Suriya’s characterisation and look in the film. He looks sharp and dapper in the motion poster. DSP’s background score for the motion poster and the visuals gel well to create a lasting impact.

There is a lot of grandeur in the film. Suriya 42 will be shot on a lavish scale and it has Disha Patani playing the female lead. The film is directed by Popular filmmaker Siva. “A mighty valiant saga” the tagline reads and that is to be considered as a depiction of the film.

The film is releasing in 10 langauges. The release date will be announced soon. More details about the project will be out in the due course.