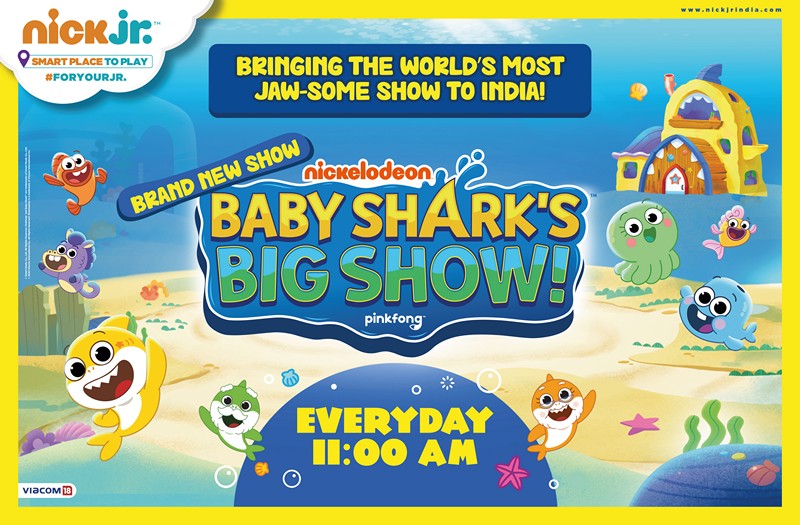 Chennai: Take an adventurous dive into the sea as Nick Jr. India, a part of India’s No 1 kids entertainment franchise Nickelodeon is all set to bring to you the fin-credible world of “Baby Shark”! Yes, that’s right, Baby Shark’s Big Show the most popular series that is a global phenomenon is making a splash this summer as it makes its Indian Television Debut starting May 15th,2022, every Monday to Sunday at 11.00AM only on Nick Jr. India.

The series brings adventures galore with groovy music that sees Baby Shark and William dive deeper into the diverse underwater world of Carnivore Cove with their friends and family. As part of the series, they will be seen exploring stunning new under water destinations while making fresh friends and big waves, all in the sharky spirit of fin-clusivity!  The series that celebrates family, friends and adventure through comedy, catchy songs, and stories of social-emotional learning is sure to keep all our young viewers on Nick Jr. India entertained.

The launch of “Baby Shark’s Big Show” will be accompanied by a robust on-air and marketing plan to leverage the global fandom of the show. The brand will deepen its engagement with toddlers through fun workshops with educational platform partners like Playydate on board and drive buzz with fun activations and collaborations with mommy bloggers and kid influencers, etc.

With global affinity, catchy music, vibrant colours, dual-gender appeal and a multi-generational family, Pinkfong Baby Shark launched in November 2015, took the world by storm, amassing 8 billion views and becoming the most-watched video in the platform’s history. The pre-school series internationally already has been seeing a soaring audience and was nominated for a Daytime Emmy Award in the category of “Outstanding Casting for a Daytime Animated Program in 2021.

So, witness the fin-credible world of Carnivore Cove with Baby Shark and his family, Mon-Sun, 11 AM only on Nick Jr. India!