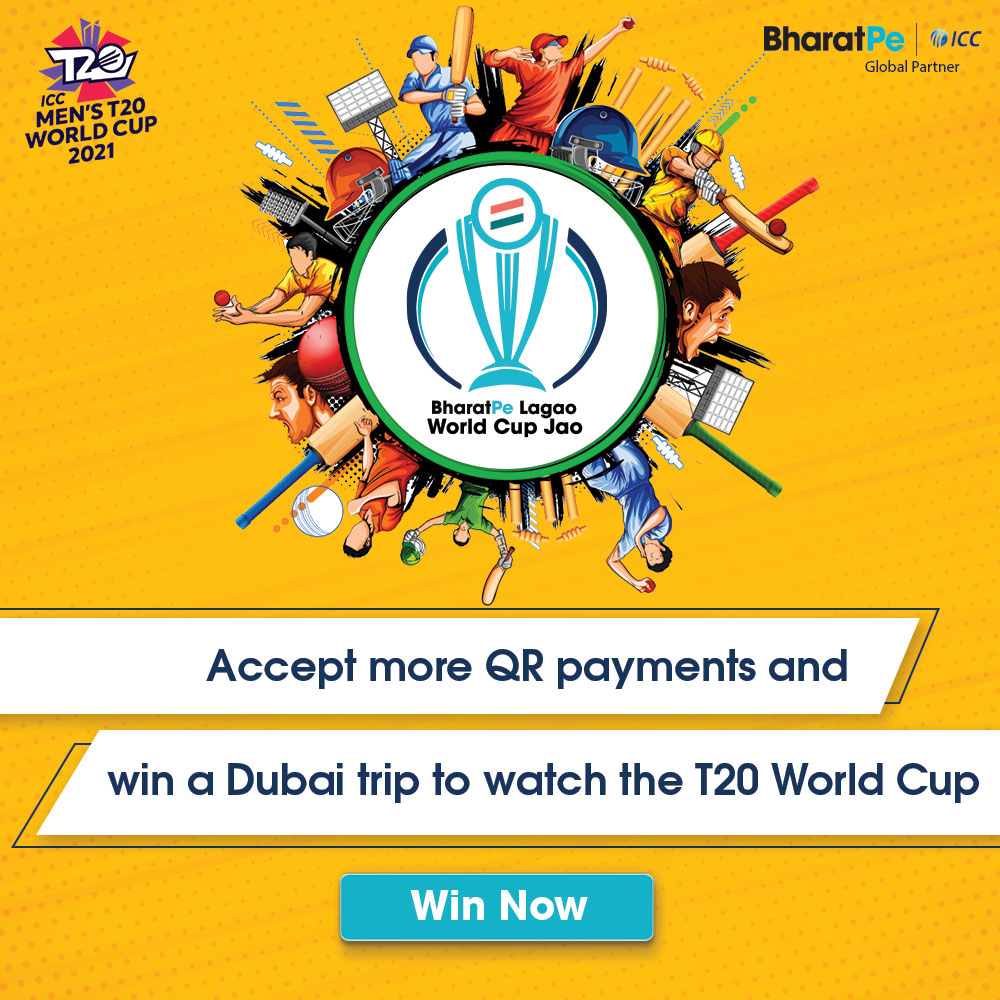 Plans to reward 400 merchants across 140+ cities

Chennai, Keeping up with its endeavour to empower small merchants, BharatPe, India’s leading fintech Company for merchants, has rolled out an innovative contest for its merchant partners called ‘BharatPe Lagao, World Cup Jao’. As a part of the initiative, BharatPe is giving its BharatPe QR merchants, an opportunity to enjoy a 2-days, all-expenses paid trip to Dubai and cheer for India at the ICC Men’s T20 World Cup 2021. The company plans to reward its 400 top transacting merchants across the country, as a part of this initiative. The contest will be live across 140+ cities where BharatPe has a presence in India. The contest ends on September 30, 2021.

Speaking about the campaign, Mr. Nishant Jain, Chief Business Officer, BharatPe, said, “Merchants are at the core of everything we do. We are committed to our vision of empowering small merchants and kirana store owners with best-in-class fintech products that can aid the growth of their businesses. We roll out innovative campaigns from time to time to reward our top transacting merchants and further nurture our relationship with them. Earlier this year, we had rewarded 673 top transacting merchants across 10 emerging cities, in the 3- month long Festive Bonanza contest. Now, as businesses get ready for the upcoming festive season, we wanted to give our top performing merchants a chance to watch India play live at the ICC Men’s T20 World Cup in the UAE. We understand that cricket is one of the most popular sport in the country and ‘BharatPe Lagao, World Cup Jao’ is designed to reward our top merchants with trip to Dubai. We are confident that this contest will enable us to further enhance our merchant engagements. We hope to touch atleast 5 million merchants with this initiative. We will be rolling out more innovative contests to empower and applaud our 7.5 million merchant partners in the times to come.”

BharatPe has witnessed a phenomenal growth over the last fiscal year, with the company witnessing a 5x growth in payments and a 10x growth in lending business. Scripting a new chapter in the country’s Digital India story, BharatPe has been rapidly expanding beyond metros, intending to empower merchants in Bharat with its safe and secure digital payment infrastructure as well as its credit offerings. Recently, BharatPe forayed into the unicorn club with Series E fund raise of US$ 370 mn at a valuation of US$ 2.85 bn. BharatPe is now amongst the Top 5 most valued Fintech startups in India, and has one of the strongest cap tables for any start-up in India.

Understanding the Basics of Sustainability. Is Time for a New Strategy?