The Vice President, Shri M. Venkaiah Naidu paid his tributes to the unsung heroes of India’s struggle for independence on the occasion of the 74th Independence Day today. In a Facebook post, Shri Naidu said that while it is natural to celebrate our national icons, there is a need to recognize the contribution of the many unsung heroes who were very popular in their respective regions and whose countless acts of valour made the British quiver.

He stressed that they should not be treated as mere regional icons but as ‘national heroes’ whose acts of courage and sacrifice should be known to every citizen across the country. He added that the nation must always be grateful to these freedom fighters, the fruits of whose selfless efforts are being reaped by us today as the citizens of a sovereign and vibrant parliamentary democracy.

The Vice President said that it is crucial to make the people aware, particularly the youngsters about the vital role played by these unsung heroes. He advised that the respective states must publish tales of their valour and sacrifices in the history text books and take steps to keep their legacy alive. ‘Only then will we be doing justice to them and build an India of their dreams – a truly Atma Nirbhar Bharat, Shreshtha Bharat and Sashakt Bharat’, he said.

He mentioned that the lockdown period had given him ample time to read books and gain more knowledge about the life and work of these great leaders.

The Vice President said that the British rule had shackled India’s growth, impoverished it in many respects and relegated our culture to the background. Lamenting that the colonial rule made India lose some of the vital links with our rich past, the Vice President called for a cultural renaissance and a refreshing flowering of literature and artistic expression in our national languages. 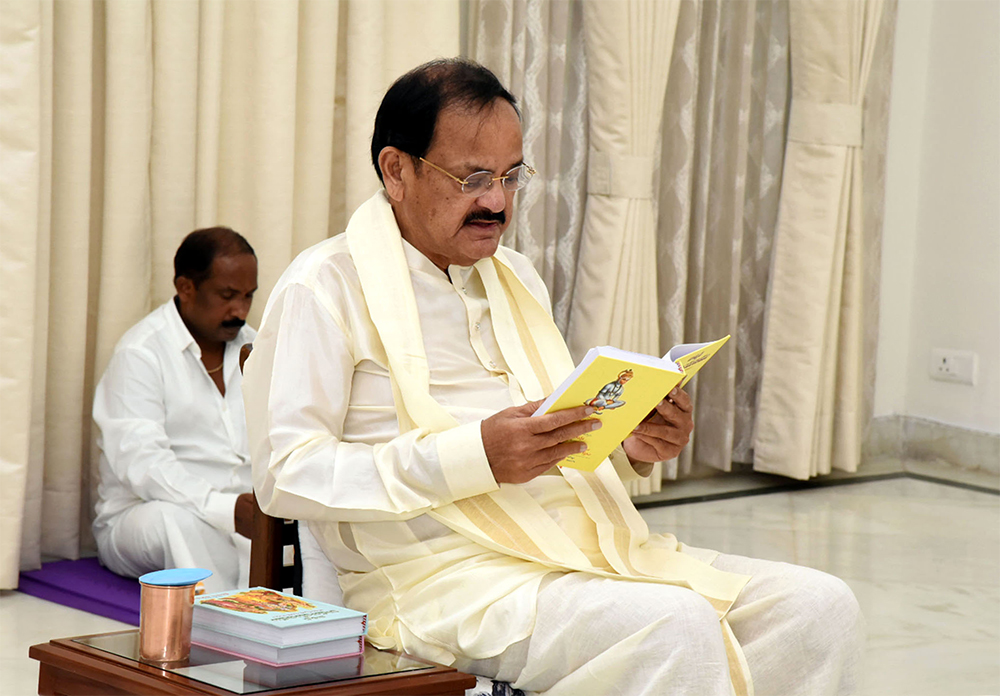 He expressed confidence that India would regain its past glory and become an ideal parliamentary democracy with the renewed determination and the tremendous energy of 130 crore people. He emphasized that every Indian from various walks of life including the people in public life, must perform his or her duty faithfully if India is to achieve new heights of development and prosperity.

Highlighting some of the milestones in India’s journey of progress, Shri Naidu said that during the last five years, India has rapidly upgraded its infrastructure and significantly strengthened its social security net. He said India now has zero un-electrified villages and has been declared Open Defecation Free. He said the economy was reengineered through path-breaking reforms in various sectors especially in the agriculture sector. Shri Naidu also lauded the government’s recently announced taxation reform to promote transparency, remove discretion and reward honest taxpayers.

Keeping in mind the progress made so far by the nation, the Vice President called for an objective introspection and said that at this crucial juncture, we must ask ourselves what we aspire to achieve as a nation by 2022.

The Vice President termed Prime Minister, Shri Narendra Modi’s call for ‘Sankalp Se Siddhi’ as a clarion call for a radical transformation in the way we think, the way we behave and the way we act to usher in a New India by 2022-23.

Outlining his vision for 2022, when India would complete 75 years of independence, Shri Naidu said that by 2022, there should be no homeless person in India. He stressed that every citizen must have access to education, employment, health facilities, clean food and drinking water and good sanitation. Referring to the need for a transformation in the agriculture sector, he said that we must strive to double the farmers’ income by 2022.

Shri Naidu called for renewed focus on upgrading the skill sets of youth in order to realise the demographic dividend. He said that we must work with renewed vigour and determination to eradicate poverty, end social and gender discrimination and eliminate corruption.

“We must secure a productive, rewarding, prosperous and peaceful life to marginalized sections of our population, including the differently abled, the women, elderly and transgender persons”, he added.

He emphasized that Antyodaya and Sarvodaya must serve as the main principles of our journey forward and added that by 2022, India must be Atmanirbhar in every sense of the word.