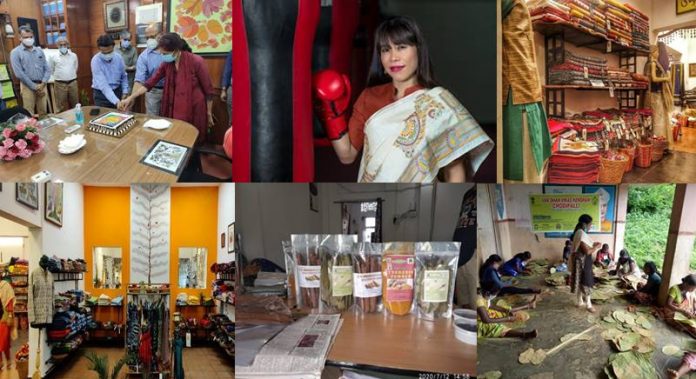 Tribal Cooperative Marketing Development Federation of India (TRIFED) under Ministry of Tribal Affairs reiterated its commitment towards the transformation of tribal lives on the occasion of its thirty-third foundation day on August 6, 2020. Working steadfastly towards its mission of tribal empowerment through enterprise and commerce, more so, during these challenging times, TRIFED has doubled its efforts to aid the tribal people in employment and livelihood generation.

With a pandemic raging across the country, when every aspect of life has gone online, TRIFED has launched its own Virtual office on its Foundation Day, August 6, 2020. The TRIFED Virtual office network has 81 online workstations and 100 additional converging State and agency workstations that will help the team of TRIFED warriors work with their partners across the country – be they from the nodal agencies or implementation agencies –on Mission-mode towards bringing the tribal people closer to mainstream development. To gauge the level of employee engagement and streamline their efforts, an Employee Engagement and Work Distribution Matrix with Dashboard Links has also been launched. Other digital software which will enable the States and regions to work seamlessly have also been unveiled. These organizational initiatives are a part of TRIFED’s ambitious all-encompassing digitization drive to promote tribal commerce and map and link its village-based tribal producers and artisans to national and international markets by setting up state of art e- platforms benchmarked to international standards.

Mary Kom, the World Champion, has joined hands with TRIFED as its brand ambassador and is doing her bit for the tribal brethren.

Registered under the then Multi-State Cooperative Societies Act 1984, TRIFED came into existence in 1987 as the national nodal agency under the aegis of Ministry of Tribal Affairs, working towards the socio-economic development of the tribal people from all states. TRIFED started its operations in 1988 with its head office in New Delhi and Shri SK Chauhan, IAS as the first Managing Director. Mr. Pravir Krishna, IAS is the current and the 36th Managing Director and he assumed charge on July 25, 2017. As of date, the organization has more than 500 employees spread across the Head Office and 15 regional offices. In its mission to empower these downtrodden tribal people, by promoting the economic welfare of their communities across India (through development of marketing and the sustained upgradation of their skills), TRIFED started the procurement and marketing of tribal art and craft items through its first retail outlet called TRIBES INDIA in New Delhi in 1999.

“A large number of people have adopted to online methods – for shopping, banking, work etc. in India during the recent lockdown and the ongoing pandemic; and the trend has been seen to have increased once the lockdown regulations are relaxed. On the supply side, the crisis due to Covid-19 has dealt a serious blow to the livelihoods of the poor and marginalised communities including the tribal artisans and forest dwelling minor forest produce gatherers. TRIFED has had to strategically respond to the emerging situation. It is in this context that our digitisation strategy is of great value.” said Shri Pravir Krishna, Managing Director TRIFED.

Adapting “Go Vocal for Local”, a mantra in these troubled times, into “Be Vocal for Local Go Tribal – Mera Van Mera Dhan Mera Udyam”, TRIFED has significantly advanced in digitising various information related to the forest dwellers associated with the VanDhan Yojana, village haats and their warehouses. This digitisation effort wherein all tribal clusters are identified and mapped using GIS technology will help bring benefits to these people under the “Atmanirbhar Bharat Abhiyan” clarion call given by PM Modi.

Another feather in TRIFED’s cap will be the about-to-be-launched exclusive e-marketplace for tribal producers – forest dwellers and artisans, to facilitate the purchase of MFPs, handicrafts and handlooms online. The Tribes India E-Mart platform, expected to be launched on August 15, 2020, will be an omni-channel facility for the tribals to sell their goods to a large national and international audience in an e-marketplace through their own e-shop. TRIFED is in the process of onboarding approximately 5 lakh tribal producers across the country and sourcing their natural produce, handcrafted goods. With digital payments enabled, it will enable the tribal brethren to not only get access to an expanded market but also to improve their credit history.

From a single flagship store at 9 Mahadeo Road, New Delhi in 1999, there are now 121 retail outlets across India. With the implementation of the new Multi-State Cooperative Societies Act, 2002, the by-laws of TRIFED were amended w.e.f. 2.4.2003 and it started functioning as a Service provider, Facilitator, Coordinator and a Market Developer for tribal products and produce.

Over the past decades, TRIFED has been steadily upping its activities and bringing in various interventions. The past few months have seen TRIFED treble its efforts to bring the rehabilitate the affected tribal people who have lost their livelihoods and jobs. Due to the suddenness of the pandemic overtaking our lives and the immediate lockdown, stocks by tribal artisans worth Rs 100 crores were lying unsold. In order to ensure that these stocks got sold and all the sales proceeds go to the affected tribal families, TRIFED has purchased more than 1 lakh items and launched an aggressive plan to market these unsold goods online (offering substantial discounts) through its Tribes India website and also other retail platforms such as Amazon, Flipkart and GeM. In April, during the lockdown, the team of TRIFED warriors also joined hands with the Art of Living Foundation to distribute free food and ration to more than 5000 tribal artisan families.

Keeping the overall approach of equipping tribal people with knowledge, tools and pool of information so that they can undertake their operations in a more systematic and scientific manner and capacity building of the tribal people through sensitization, formation of Self Help Groups (SHGs) and imparting training to them for undertaking a particular activity, TRIFED has put in place several path-breaking initiatives. The ‘Mechanism for Marketing of Minor Forest Produce (MFP) through Minimum Support Price (MSP) & Development of Value Chain for MFP’ Scheme stand out in particular as a beacon of change that has impacted the tribal ecosystem as never before. This scheme that has been implemented in 21 states of India has been successful in injecting Rs 3000 crores directly in the tribal economy since April 2020. Aided by the Government push in May 2020 wherein the prices of Minor Forest Produce (MFPs) were increased by up to 90% and the inclusion of 23 new items in the MFP list, this flagship scheme of the Ministry of Tribal Affairs, which draws its strength from The Forest Rights Act of 2005, aims to provide remunerative and fair prices to tribal gatherers of forest produces.

The ongoing procurement of MFPs under the MSP for MFP Scheme in 16 states has hit a record-breaking high with the procurement touching Rs 1000 crores, and another Rs 2000 crores by trade over and above the MSP.

The Van Dhan Vikas Kendras/ tribal start-ups, also a component of the same scheme has become a valuable source of employment generation for tribal gatherers and forest dwellers and the home-bound tribal artisans. 1205 Tribal Enterprises spread across 18500 SHGs have been established to provide employment opportunities to 3.6 lakh tribal gatherers and 18000 Self-help groups in 22 States. The programme ensures that the proceeds from the sales of these value-added products go to the tribals directly. The value-added products benefit largely from the packaging and marketing that these tribal enterprises provide. Manipur and Nagaland have emerged as examples of States where these start-ups have bloomed, with Manipur now having 77 Van Dhan Kendras for value addition and processing of forest produces. These Van Dhan Kendras have reported sales of MFP products worth Rs. 49.1 lakhs since September 2019. To make it more worthwhile and to offer a comprehensive development package for tribals and help in their enterprise and commerce and boost their incomes, TRIFED is planning the convergence of the Van Dhan Yojana with the MSP for MFP Scheme in the next phase of its activities.

Convergences with various Ministries and Departments such as Ministry of Rural Development (MoRD), Ministry of Small and Medium Enterprises (MSME), Ministry of Food Processing Industries (MoFPI), Ministry of AYUSH are being planned all with the aim of improving sustainable livelihoods and income opportunities for these tribals. These convergences will help ensure “round the year income earning opportunity” for tribals by engaging them in a variety of economic activities ranging from agriculture, horticulture, floriculture, Medicinal & Aromatic plants etc, going beyond Minor Forest Produces.

Systems and processes are being put in place across the country so that the procurement of MFPs become a round-the-year operation and double the present reach to over Rs 6000 crore (and benefit 25 lakhs tribal gatherer families) from the current level of Rs 3000 crores. To bolster the scale-up and prepare for additional activities, establishment of 3000 VDVKs involving 9 lakh tribal beneficiaries in the FY 2020-21 is being targeted.

To bring more exposure to the empaneled tribal artisans and to bring their skill sets and products to international standards, TRIFED has put in place several design initiatives by actively collaborating with renowned designers such as Ruma Devi and Rina Dhaka to train the tribal artisans.

With the successful implementation of these initiatives and many more upcoming ones, TRIFED is working towards the complete transformation of tribal lives and livelihoods across the country through by reinvigorating the flagging economic condition of the affected artisans and gatherers.