Chennai, August 7, 2020: Women need to have equal legal rights related to land and property, said the Vice President of India Shri M Venkaiah Naidu. Speaking at the launch of a conference on ‘Science for resilient food, nutrition and livelihoods’ organized by the M S Swaminathan Research Foundation, the Vice President specifically spoke of women farmers. “Land rights are very important for women farmers.  In our system land rights are usually given to men, though changes are slowly coming in. Land rights have to be given to women also; house patta, titles and all properties have to be in the name of men and women farmers,” he said.

The Vice President emphasizing on anticipatory research and collaboration, also spoke of integrating traditional knowledge with other forms of knowledge. Saluting India’s farmers for record food grain production in spite of distress and a pandemic, he said urgent focus and concerted action was needed on nutrition. Recalling multiple schemes for health and nutrition by Government of India, he underlined the need to manage climate change impact and conflicts. 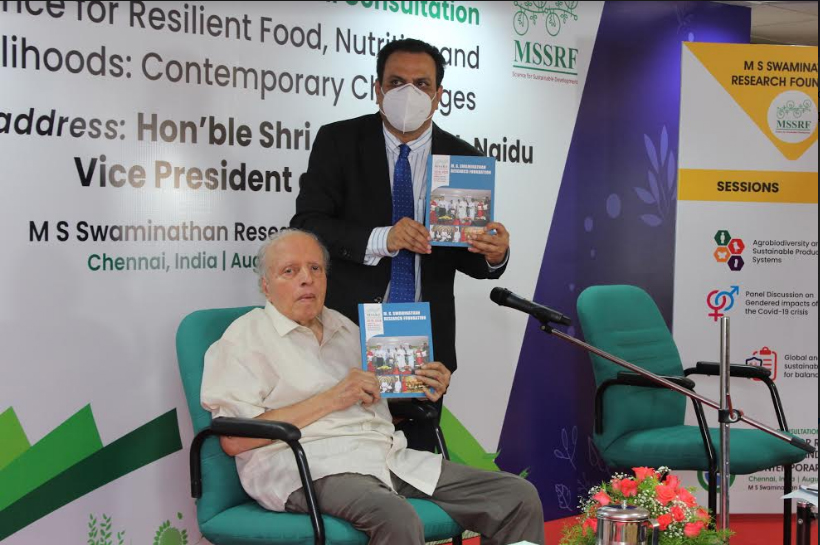 Speaking of the government’s commitment to doubling farmers income, he said he was very happy to hear Professor Swaminathan’s views on agriculture and would take efforts to persuade these ideas at various levels including in Parliament.

In his address, Prof M S Swaminathan said that the vision of the government’s commitment to doubling farmers income needed to continue and added that emphasis on rights of women farmers should be taken up legally in the Parliament. Prof Swaminathan had tried to introduce a Bill on Land Rights of Women Farmers when he was Rajya Sabha member.

The Principal Scientific Advisor to the Government of India, Professor K Vijayaraghavan spoke of learning lessons from the situation such as this pandemic. “We need a new model of sustainable development that has less negative impact and zero negative impact on natural resources and our biodiversity and increases our quality of life.” He stated that this was possible by using science and technology for this and making demands on scientists for a more sustainable future. 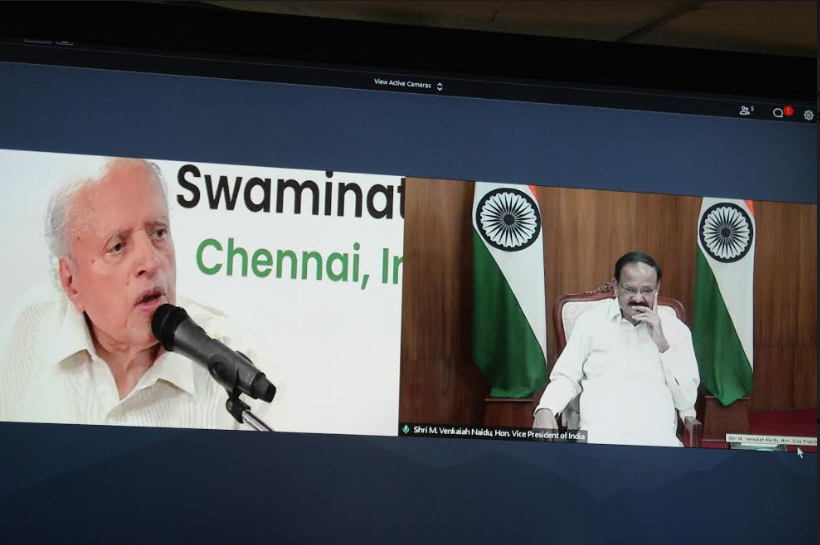 Chairperson MSSRF Dr Madhura Swaminathan said the Foundation was continuing to look for “science-based solutions and methodologies for improving agricultural incomes and livelihoods in India and elsewhere” and sought support to take forward this agenda. MSSRF Executive Director, Dr K S Murali who presented the highlights of the annual report including the outcomes of scientific research for development by the institution during 2019-20 also announced the ‘Mina Swaminathan Fellowship on Gender and Development’ for journalists. The Fellowship theme for this year is the “Gendered Impacts of COVID-19” and will be advertised and opened shortly for applications.

The three-day virtual conference (August 7, 8 & 10) includes sessions ranging from agrobiodiversity to gender, from climate change to policy and has eminent speakers from across the globe. More details can be accessed at www.mssrf.org while the conference is being streamed live on the M S Swaminathan Research Foundation YouTube and Facebook handles.

Sathyabama Institute of Science and Technology held its 30th Convocation – 3432 Students received the Degrees from Thiru. A. RAJARAJAN, Distinguished Scientist and Director,...