Ponds workers protest against the Hindustan Unilever management and insist on implementing the demands of the beneficiaries!

The former employees of Pond’s group of companies, under the banner of Agila Munnal Pond’s Employees Nalasangam, have been agitating for several years to press their demands regarding non-implementation of benefits under three welfare Trusts set up by Pond’s (India) Limited during the years 1980 to 1984 for the welfare of its employees including Supervisors and Managers prior to its merger with Hindustan Unilever Limited (HUL).

As part of this agitation, the members of the Agila Munnal pond’s Employees Nalasangam will undertake a day-long fast from 9 a.m. to 5 p.m. in front of the Rajaratnam Stadium, Egmore, on September 2, 2022, in a bid to secure long-pending demands as beneficiaries of the three Welfare Trusts.

The Nalasangam president, Mr. K. J. Mohan Kumar, formed Senior HR Manager of Pond’s / Hindustan Unilever Limited and their General Secretary Mr. J.C. Sebastian, former employee of Pond’s, have pointed out at this press conference organised in Chennai on August 30, 2022, that the management of HUL had unscrupulously closed down all the Pond’s factories.

The corpus of the three welfare Trusts amounted to more than Rs. 1,765 crore as on 2012, which would have multiplied several folds to a value of over Rs. 4,500 crore.

The employees were kept in the dark about the formation of the Trusts, their details and functioning. Many of the employees suffered due to ill-health and starvation. The erstwhile Pond’s workers engaged in Cosmetics, Leather, Thermometer and Mushroom business are suffering (Heart problem, skin allergy, respiratory problem etc.) due to occupation-related issues and are unable to meet the medical requirements due to lack of financial resources. Several of them have lost their lives and many others are bed-ridden, counting their days to the grave.

1. To furnish the audited balance sheet of the three Welfare Trusts from the date of formation of the Trusts.
2. To incorporate three members from the Managers, Supervisors and Employees into the above Welfare Trusts as Trustees.
3. To facilitate merger of the three Welfare Trusts and evolve a scheme of disbursement of the Trust Corpus to the Beneficiaries and their dependants.
4. To direct the concerned law-enforcement wings of this country to take stringent action against the Trustees and the company (HUL) for violations with regard to implementation by the Trusts.
5. To freeze the bank accounts of all the three welfare Trusts till the above demands are met.
This is stated in the statement released to media. 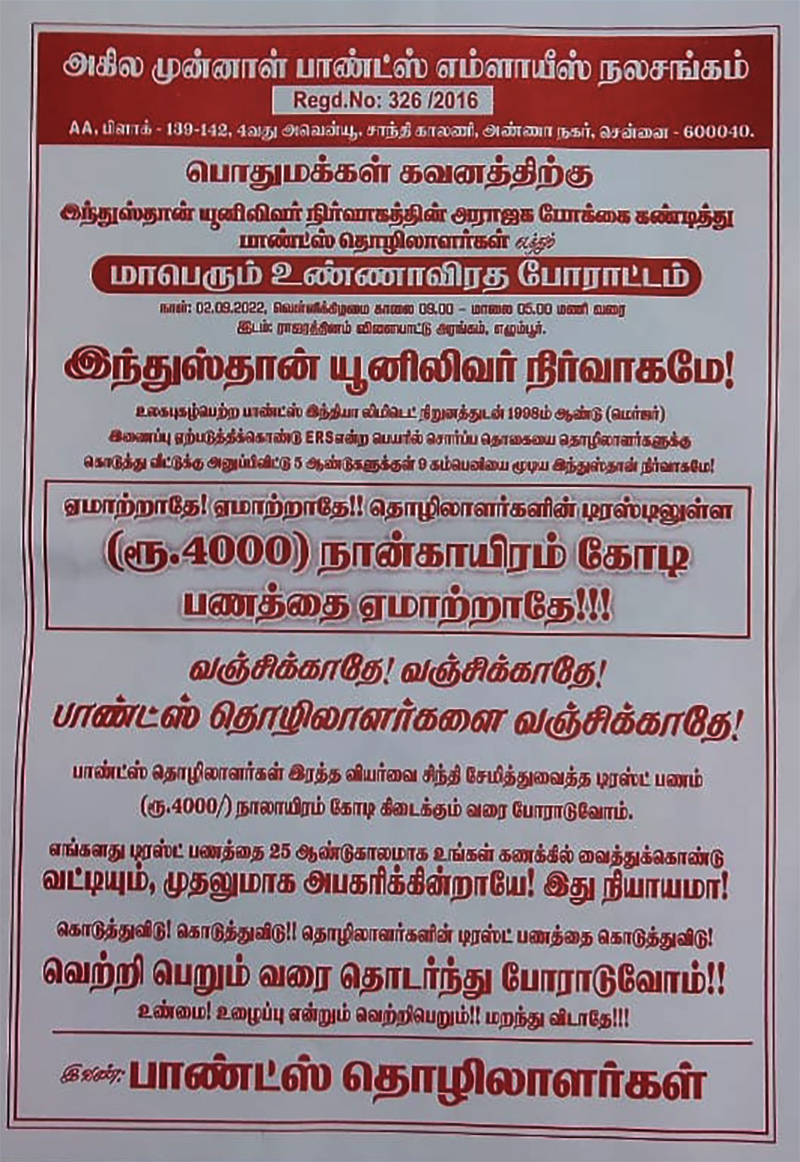