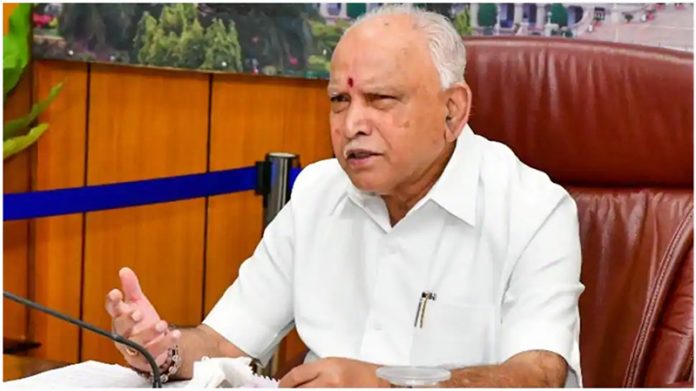 Karnataka Chief Minister BS Yediyurappa tested positive for Covid-19 on Sunday and has been admitted to a private hospital in Bengaluru.

“I have tested positive for coronavirus. Whilst I am fine, I am being hospitalised as a precaution on the recommendation of doctors. I request those who have come in contact with me recently to be observant and exercise self quarantine,” Yediyurappa announced on Twitter.

Seventy-seven-year-old Yediyurappa has been admitted to the Manipal hospital, his office confirmed. The hospital said that the CM is clinically stable and is being monitored closely by its team of doctors.

He has had a series of public engagements and meetings this past week, including the inauguration of the project work on the Bengaluru Bio-life-sciences Park on July 29, where entrepreneur Kiran Mazumdar-Shaw was present.

He had also met Dr K Kasturirangan on Friday, to felicitate him for the New Education Policy (NEP) that the octogenarian scientist had drafted. The NEP was announced by the Central government only a few days ago.

Dr Rangan, who had avoided most personal meetings in the last few months, had made an exception on Thursday by allowing the CM and the deputy CM Ashwathnarayan to visit him.

Besides this, Yediyurappa has met Cabinet colleagues and Karnataka Governor Vajubhai Vala.

I have tested positive for coronavirus. Whilst I am fine, I am being hospitalised as a precaution on the recommendation of doctors. I request those who have come in contact with me recently to be observant and exercise self quarantine.

Congress MLA Rakibul Hussain has become the seventh legislator in Assam to contract coronavirus infection. Hussain, the MLA from Samaguri in Central Assam and a former state minister, said in a Facebook post that he tested positive for the virus along with his wife Nazreen Hussain. His son, however, tested negative. “I have tested COVID-19 positive…. Request everyone who came in contact with me in the last four days to get themselves tested,” he said in the post. The former minister is the first Congress legislator to have been diagnosed with COVID-19. Another prominent politician of the party, All India Mahila Congress president and former Silchar MP Sushmita Dev, had earlier tested positive for the virus. All the other MLAs of the state, who had tested positive for COVID-19, were from the BJP. They are Assembly Deputy Speaker Aminul Haque Laskar, Atul Bora, Krishnendu Paul, Naryan Deka, Bolin Chetia and Nabanita Handique.

Meanwhile, the Drugs Controller General of India (DCGI) has given nod to the Serum Institute of India (SII) for conducting phase 2 and 3 human clinical trials of a COVID-19 vaccine candidate, developed by the University of Oxford, in the country. Government officials said the approval for conducting phase 2 and 3 clinical trials by the SII was granted by DCGI Dr V G Somani late Sunday night after a thorough evaluation based on the recommendations of the Subject Expert Committee on COVID-19. As a rapid regulatory response, the expert panel at the Central Drugs Standard Control Organisation (CDSCO) on Friday, after a detailed deliberation and considering the data generated on the vaccine candidate in phase 1 and 2 of the Oxford University trial, had recommended granting permission for phase 2 and 3 clinical trials of the potential vaccine, ‘Covishield’, on healthy adults in India, the officials said.

“The firm has to submit safety data, evaluated by the Data Safety Monitoring Board (DSMB), to the CDSCO before proceeding to phase 3 clinical trials,” a senior official said. “As per the study design, each subject will be administered two doses four weeks apart (first dose on day one and second dose on day 29) following which the safety and immunogenicity will be assessed at predefined intervals,” the official said.

The panel has also recommended that the clinical trial sites which have been proposed for the study be distributed across India.

According to the revised proposal, 1,600 people aged above 18 years will participate in the trials across 17 selected sites, including AIIMS Delhi, BJ Medical College in Pune, Rajendra Memorial Research Institute of Medical Sciences (RMRIMS) in Patna, Post Graduate Institute of Medical Education and Research in Chandigarh, AIIMS-Jodhpur, Nehru Hospital in Gorakhpur, Andhra Medical College in Visakhapatnam and JSS Academy of Higher Education and Research in Mysore.

“According to the application, it would conduct an observer-blind, randomised controlled study to determine the safety and immunogenicity of ‘Covishield’ on healthy Indian adults,” the official said.

The SII, which has partnered with AstraZeneca, for manufacturing the Oxford vaccine candidate for COVID-19 had submitted its first application to the DCGI on July 25 seeking permission for conducting the phase 2 and 3 trials of the potential vaccine.