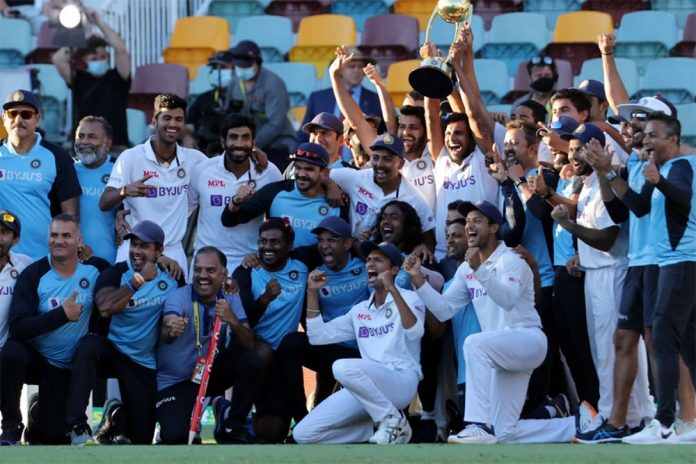 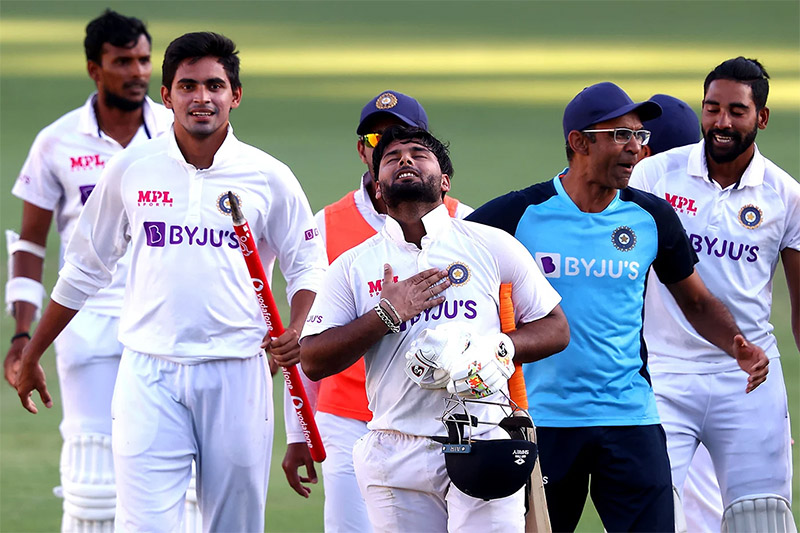 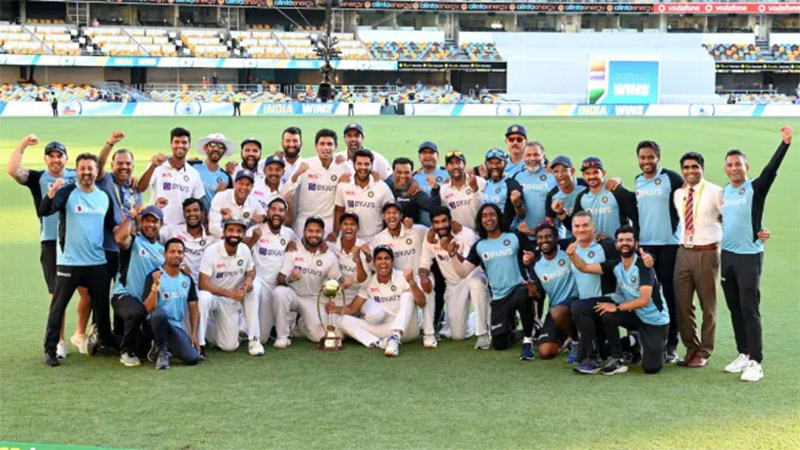 In an epic performance by Team India, they beat hosts Australia in the Brisbane Test by four wickets, and pocketed the Border-Gavaskar Trophy 2-1. This performance has come in a tough situation — after India kept on losing key players throughout the series, that forced them to field a second-rung team. India chased down a mammoth 328 — and breached Aussie fortress, the Gabba after 32 years. 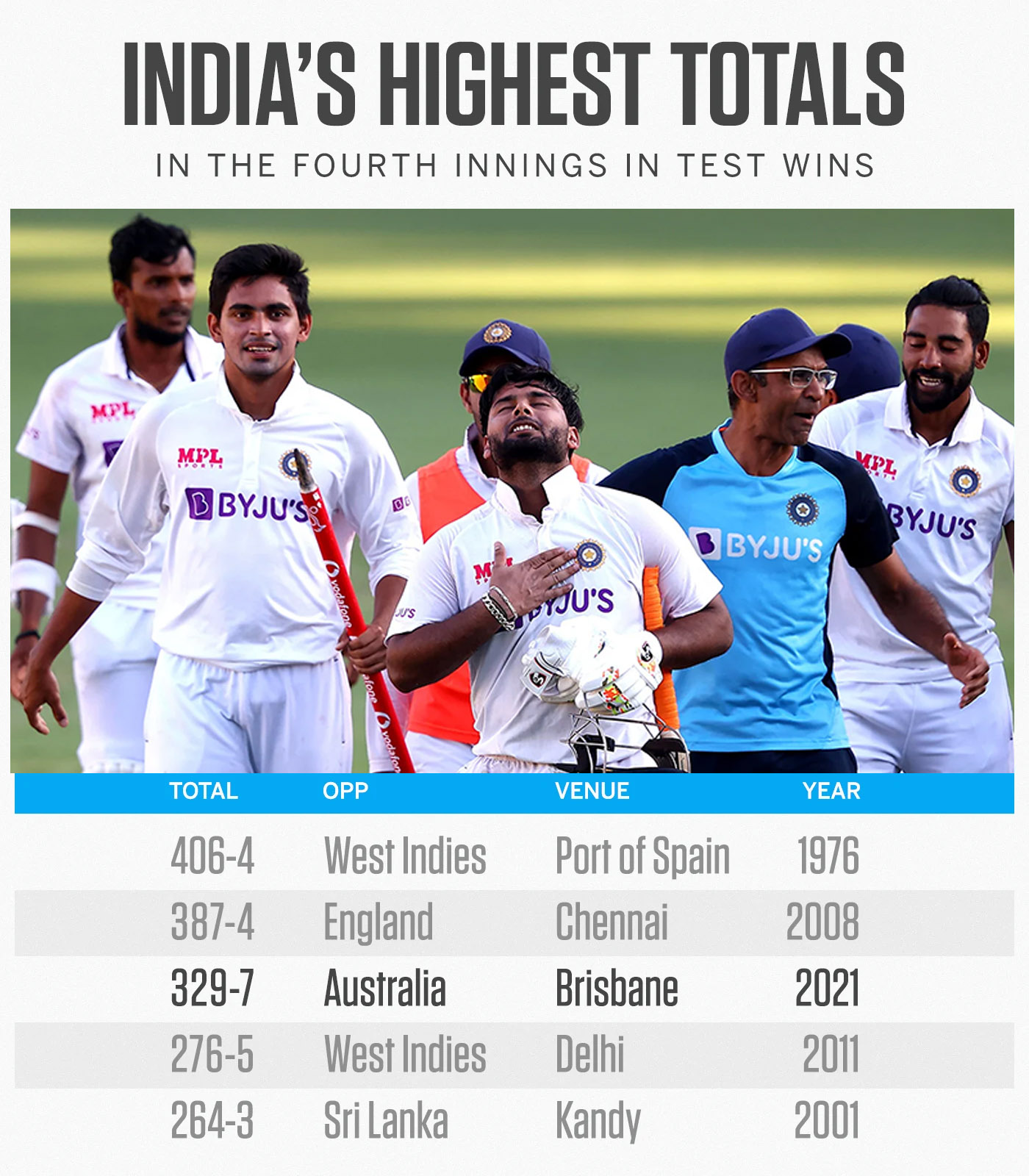 With over 324 runs needed at the start of day five — where a lot of rain was predicted, India could have gone for an easy option of a draw, after they lost opener Rohit Sharma early in the day. But they chose to go for the target, and in style. It all started with Shubman Gill taking the attack to the opposition bowlers, and slammed a 91, while Cheteshwar Pujara kept blocking everything at the other end. In one over of Mitchell Starc, the duo added 20 runs, against the run of play. 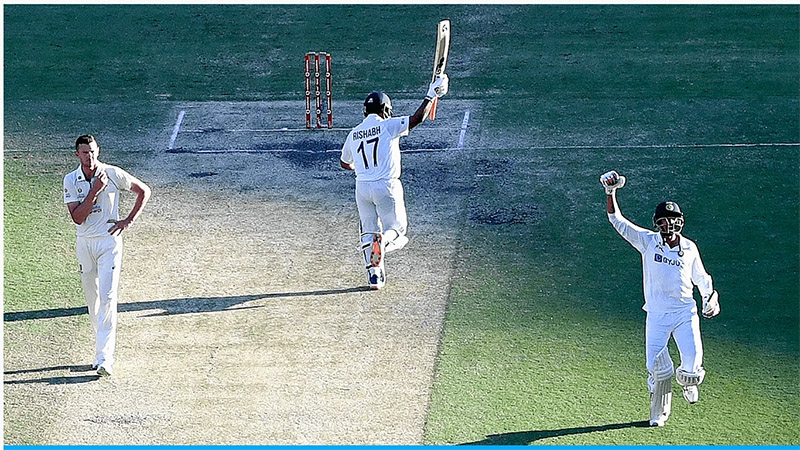 But just nine runs short of his maiden Test ton, he was caught brilliant by Steve Smith, off Nathan Lyon. Then came skipper Ajinkya Rahane, who showed the intent, right from the word go. He scored a quickfire 24, and the message to the Aussies was clear. One particular moment in the match could be termed as game-changing — one where Rahane stepped down the track and hit Lyon for a humongous six. 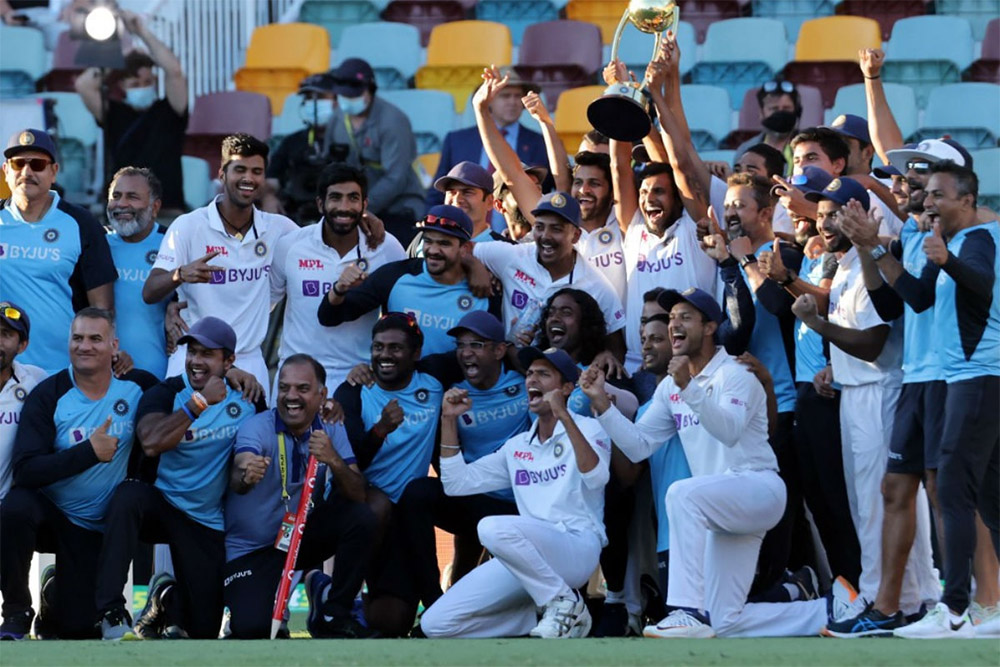 Soon Pujara too reached his fifty and tried to up the ante. But India lost Pujara and Rahane rather quickly that could have sent panic attacks in the Indian dressing-room. But not for Rishabh Pant. The man just played ‘coming off age’ innings for his 89 not out and took India home. What is interesting is that Pujara, during his 200-ball stay at the crease, copped multiple blows on the head and hand. 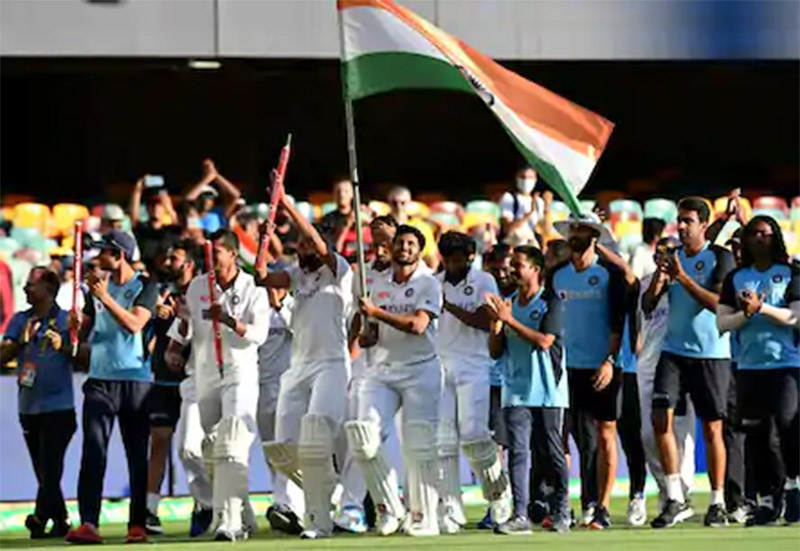 There came a moment in the game when India lost Mayank Agarwal to Cummins, but Pant did not back out. He battled the pressure of taking the team to the win, also making sure India don’t lose it from there. India still needed over sixty, when Mayank had departed. But from there on, hero of first innings, Washington Sundar, lent a supporting hand to senior partner Pant. In the end, he hit a four to Hazlewood to end the match and series. 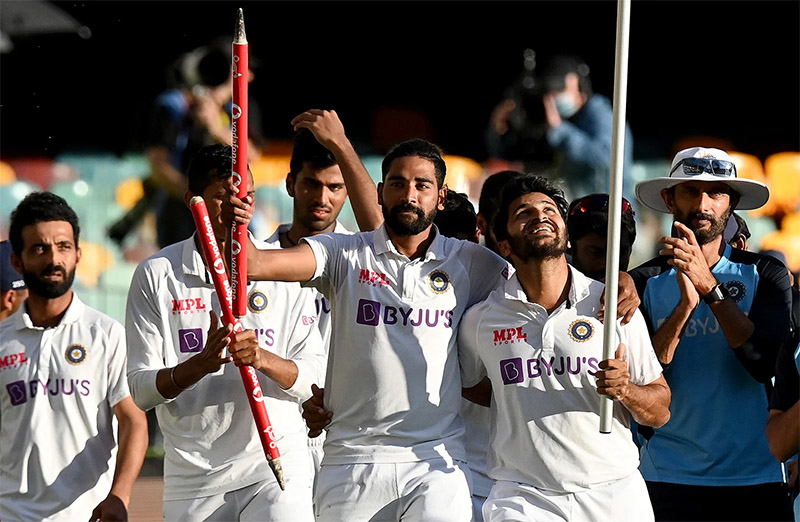 Rishabh Pant is the man of the match. “This is one of the biggest moments of my life now, and I’m happy that all the support staff and all my teammates supported me even when I wasn’t playing,” he says. “It’s been a dream series. The team management always backs me and tells me, you are a matchwinner and you have to go win the match for the team. I keep thinking every day that I want to win matches for India, and I did it today. It was a fifth-day pitch and the ball was turning a bit. I thought I have to be disciplined with my shot selection.” 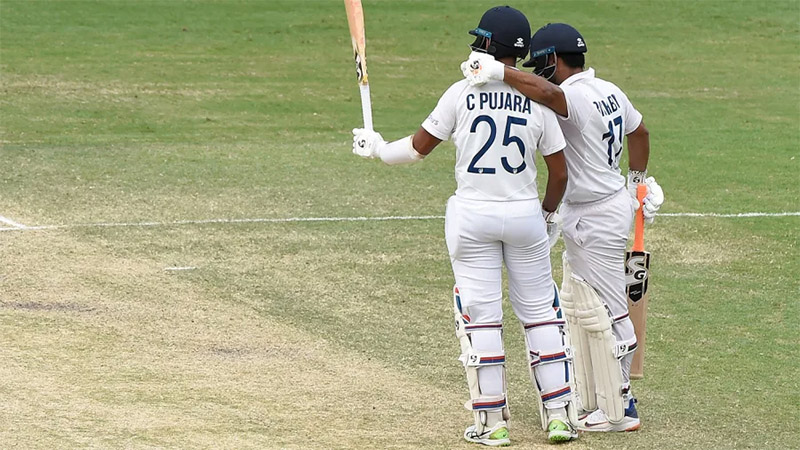 Ajinkya Rahane: “It really means a lot to us. I don’t know how to describe this victory. I’m just proud of all the boys, each and every individual. We just wanted to give our best, not to think about the result. When I went in, conversation between me and Pujara was Puji to bat normal and me to go for my shots, because we knew Rishabh and Mayank were there. Credit to Pujara, the way he handled the pressure was magnificent, and Rishabh was brilliant in the end. Taking 20 wickets was the key, that’s what we identified, that’s why we picked five bowlers. Washington Sundar got that balance for us, intention was to play five bowlers. Siraj had played two Test matches, Saini one, Thakur one, Natarajan also on debut, all credit to them. After Adelaide we didn’t discuss about what happened, we just wanted to play our game, show good attitude, show good character on the field. It was all about the team effort. I would also like to thank our fans who came out here and supported us, and the Indian team would like to give Nathan Lyon a signed jersey for his 100th Test match.”

BCCI president Sourav Ganguly lauded team India’s winning effort at the Gabba term the win and the series victory as a remarkable feat.

“We are extremely proud of the series win. Beating Australia in Australia by a young team will remain etched in the history of Indian cricket forever. It cannot get better than this. I am so proud of everyone. Congratulations to Ajinkya Rahane and Ravi Shastri and the rest of the touring party for this remarkable feat,” said Ganguly in a BCCI release. 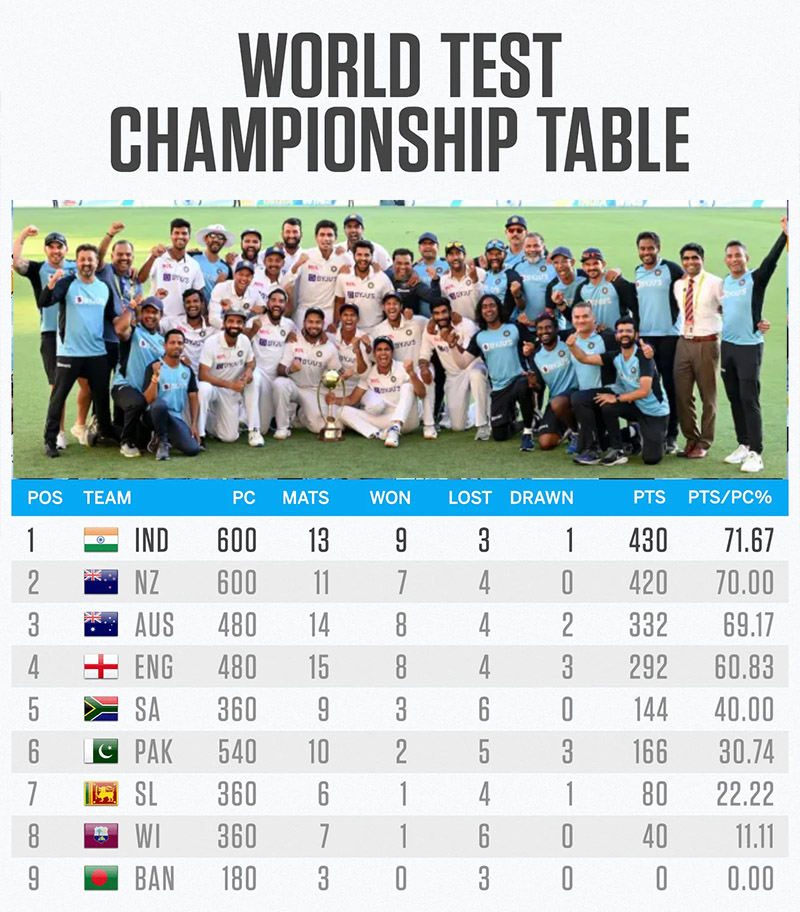