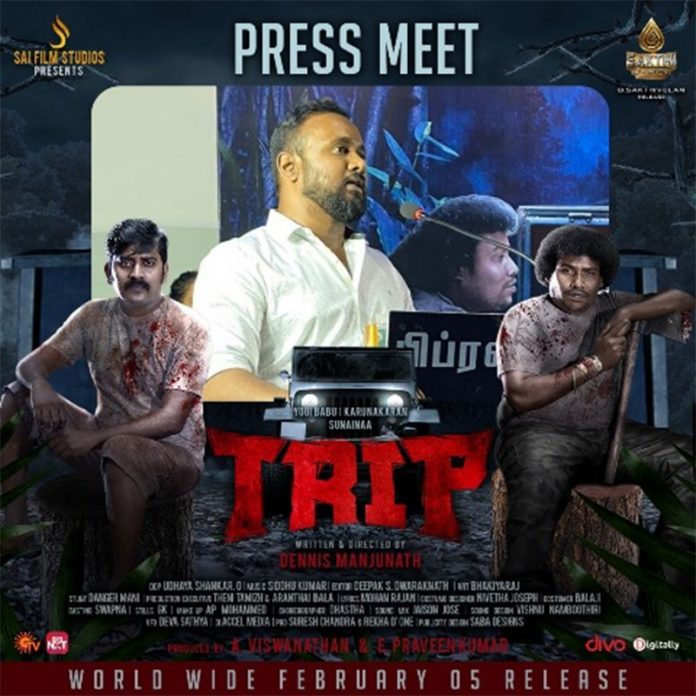 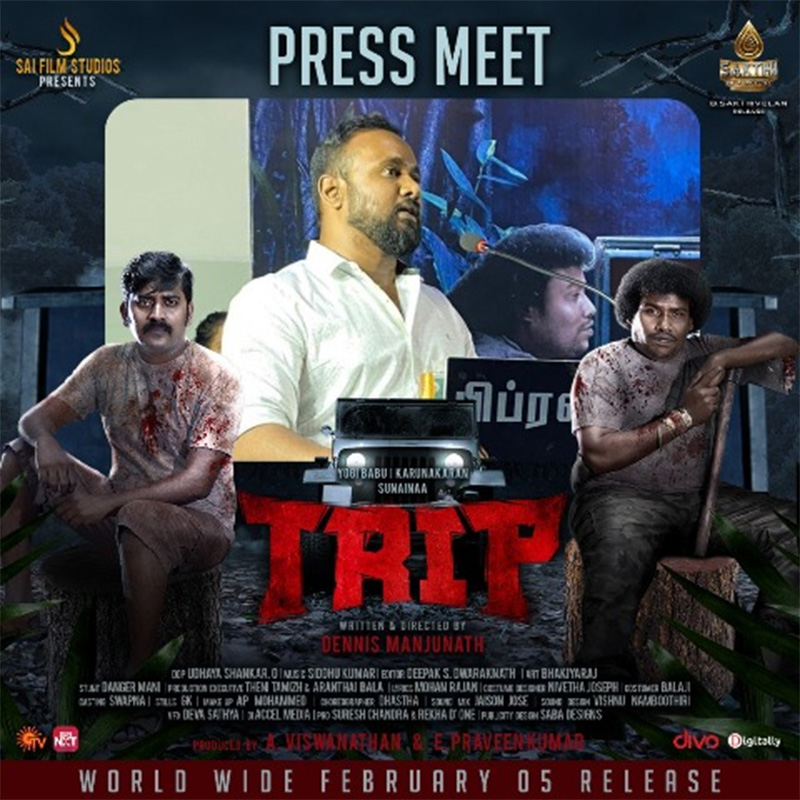 The first-ever Cannibalism based comedy genre in Tamil film industry ‘Trip’ is all set to have its theatrical release on February 5, 2021. With the trailer unveiled this evening witnessing good reception, the cast and crew was present to interact with press and media. The film features an ensemble star-cast including Yogi Babu, Karunakaran, Sunaina, Praveen and many more prominent actors. The film is directed by Dennis Manjunath and is produced by A. Viswanathan & E. Praveen Kumar of Sai Film Studios.

Director Dennis Manjunath said, “I got acquainted with Yogi Babu sir while working with Sam Anton sir in 100. He asked me to come up with a script and then producers A. Viswanathan & E. Praveen Kumar were polite and so much confident about me. I wanted to come up with a script that is unique and entertaining at the same time. Already Tamil movies have come across zombie concepts and I wanted to try something based on Cannibalism. This is a most-famous genre in Hollywood that is always laced with thrills and horror. But I wanted to add humour dosage to this genre and I would say this is the first-ever time, a film based on Cannibalism is based in our industry. Lakshmi Priya is a talented actress and she will surely get more offers after the release of this film. Kalloori Vinoth was there in my mind while penning the script. Nancy Jenifer is making her comeback into industry after a long time. RJ Siddhu is often known for his hilarious characters and for the first time would be seen playing a serious character. VJ Rakesh got onboard during the spur of moment. I thank Sunaina mam for accepting to be a part of this film. You’ve would have seen her in emotional and romantic roles, but for the first-time would appear in a fun-filled action packed character. Praveen has been a real big support throughout the film. Audiences are spending a big money for entertainment and I have made this film with the attempt of entertaining them for couple of hours. It’s been almost a year we all enjoyed movies in theatres. I thank Master and Eeswaran team for coming up with the strong attempt of getting the movie released in theatres, which has enabled us to come forward to get our movies. I was really surprised to have Sakthivelan sir to have watched our movie and taken forward to get the movie find a big release. He is such a great hearted man and has so much of detailing nuance as he kept questioning me a lot. He was very happy about the film’s output and his presence is more like God’s blessing.”

B. Sakthivelan, Sakthi Film Factory said, “It was really a distressing moment for every film fraternity member to have missed the interaction and meeting with press-media friends. Vijay’s Master is a game-changing film, which has broken the myth that crowds wouldn’t come to theatres during this pandemic crisis. I am happy that audiences have delightedly experienced the joy of watching the film as celebration in theatres. Because of ‘Master ‘, many films that were handed over to OTT platforms have taken back and decided to release the movie in theatres… I am emotionally inclined towards the producers as they are so much dedicated and passionate about the film. They have spent a big money on the project with big hopes and confidence on the team that comprises majorly of newcomers. Moreover, the film’s budget is more than routine Yogi Babu Movies and I am sure, they will earn good profits. I thank producers for such a wonderful gesture for having so much affinity for the film. Yogi Babu, Karunakaran and everyone in the movie have been taking this film wholeheartedly towards the crowd with good promotions. Trip is going to be a commercially successful film and I am extremely happy to be a part of this project.”

Actor Praveen Kumar said, “Dennis and I became friends while shooting for Sam Anton’s 100 and later we discussed many scripts. Both of us had mutual respect for each other and would wish each other for success. After waiting a long time, I wanted to create an opportunity for myself. I thank Sunaina for being a part of this film. She never carried her promising filmography in her mind, but took up a challenging role. Her presence is a big support to this film. Lakshmi Priya has done a groovy performance and everyone in the movie have exerted their best into the characters. I can’t thank enough the technical crew, who has been major pillars for this movie. I am not sure if there would be a wonderful chemistry between hero and heroines, but more between cinematographer and director. There is only couple of songs in the film, but Siddhu Kumar will score big with BGM. I thank Sakthivelan sir for being a huge support to this movie and if not for his involvement, Trip would have not found a big release that is happening now.”

Actress Sunaina said, “Director Dennis is a hard worker and has put up a greater research work. He was very much protective on the sets and made sure I was comfortable on the sets. Soon after signing the project, I was told that I would be acting with a dog and was taken by surprise, when got to see a Pitbull. It was a great experience and I was initially doubtful if it would be friendly with me. It’s a tough one and later we got so much acquainted. Both of us got so much attached and we have done some action sequences as well. I thank each and everyone in the film for being supportive and sweet throughout the entire project.”

Actor Karunakaran said, “It’s been a phenomenal experience working in this film. In particular, I was surprised about the heroines in the film, for they have come out of the comfort zone and done something challenging including action sequences. Rakesh has become a very close friend of mine and he gave me training for Discovery Tamil Channel to host the show. I was really happy when the channel crew was enthralled with my work and all credit goes to Rakesh. Today, it’s the final day of Sivakarthikeyan’s Ayalaan shooting and I have taken a small excuse to be here. It’s because of the hard work the entire team has done.” 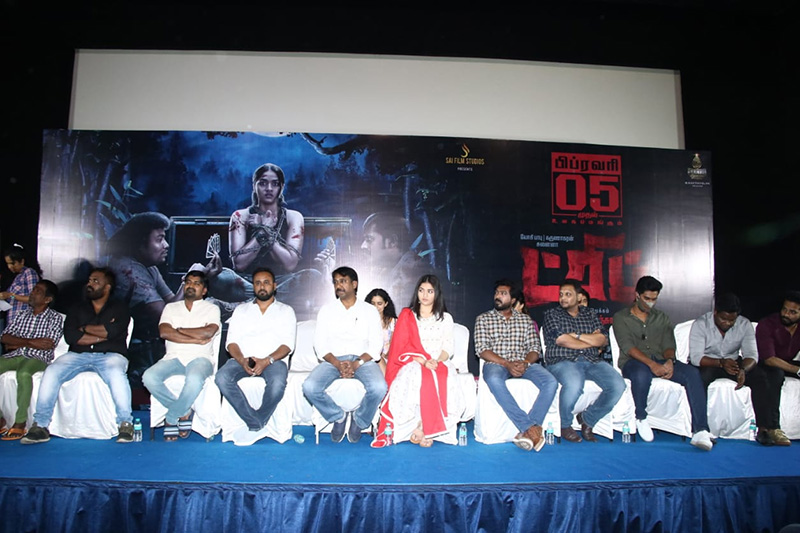 Producer Vishwanathan, “The only person I knew in the film industry was Dennis and I am novice here. I was so much engrossed with the way, he narrated the script and I could visualize it. The casting has helped a lot in nurturing the script. Everyone including Karunakaran, Yogi Babu and the entire star-cast has done a fabulous job. Soon after getting Praveen in lead role, we were looking out for heroine and were so happy that Sunaina accepted to be a part of this film. Athulya is already a famous actress in Malayalam industry and has already done 3 movies including one with Mammootty sir. Filmmaker Dennis, Cinematographer, Music Director and Editor have been the most promising pillar. All of them enjoyed the best during the shooting. I thank Sakthivelan sir for casting his Midas-touch on this film and we are assured of a smooth release through his involvement.”

Music director Siddhu said, “When the director narrated me the script, I was actually asking for the songs and was slightly shocked to hear him say only two songs among which, one of them is used as promotional material. But I am glad that I got a big opportunity and scope for more BGM and rerecording.”

Cinematographer Udhayashankar said, “First and foremost, I thank my assistants, who had done all hard work as their own project. I thank director Dennis for getting me into this project. Every artiste and technician in this film has exerted an impeccably huge energy with more enthusiasms, which will reflect in the film.”