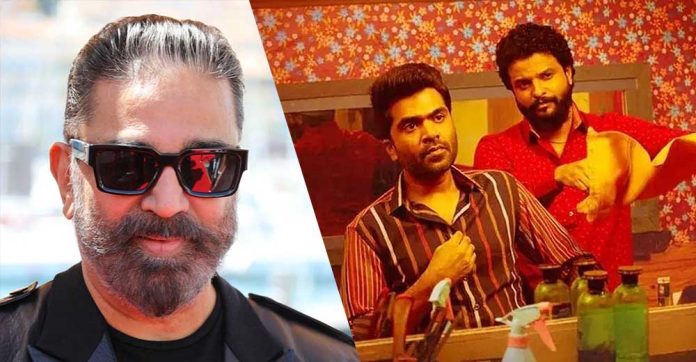 Here are some of the excerpts from the event…

Director Gautham Vasudev Menon said, “Initially, I wanted to direct Nadhigalilae Neeraadum Sooriyan, but that was the time, when Jeyamohan narrated me a one line story, but with a statement that it would look perfect for a newcomer. But I assured him stating that Silambarasan will give an unconditional effort just like a newcomer for this script. When I approached Simbu with this story, he instantly gave a nod to this project. Initially, AR Rahman had delivered 3 songs for the other movie, but when I narrated him the script of Vendhu Thanindhathu Kaadu, he gave me fresh songs. Ishari sir accepted it without any suggestions to produce this movie. The movie got materialized because of their support. One might not notice any story in this movie for it is all about the moments that occur in the life of a man. The process of making this movie itself was a fresh experience for me. Jeyamohan used to tell me that a director’s real success is when they come out of their comfort zone and try something unique. He told me that I have succeeded as a filmmaker here with this movie. We believe that we have done a good movie. When he gave me the script, there wasn’t the romance element in this movie. After discussing with him, I have tried placing that aspect that fits for this premise. The relationship and bonding I share with AR Rahman is beautiful. He would call me up at night 2 a.m. to discuss the story and create music. The whole process of working with him is lovely.

Music director AR Rahman said, “Gautham is a diehard music lover, and he would take any music that I give him. This often makes me to work hard for giving best to him. I always strive to give good songs for his movies. When Thamarai comes into the picture for penning lyrics, the entire colour of song changes. I am always confident that Gautham gives best picturing for the songs, and that’s the reason behind our collaborations happening consistently. Moreover, I like Simbhu a lot. I am happy that both the songs and the entire film have come out really well.” 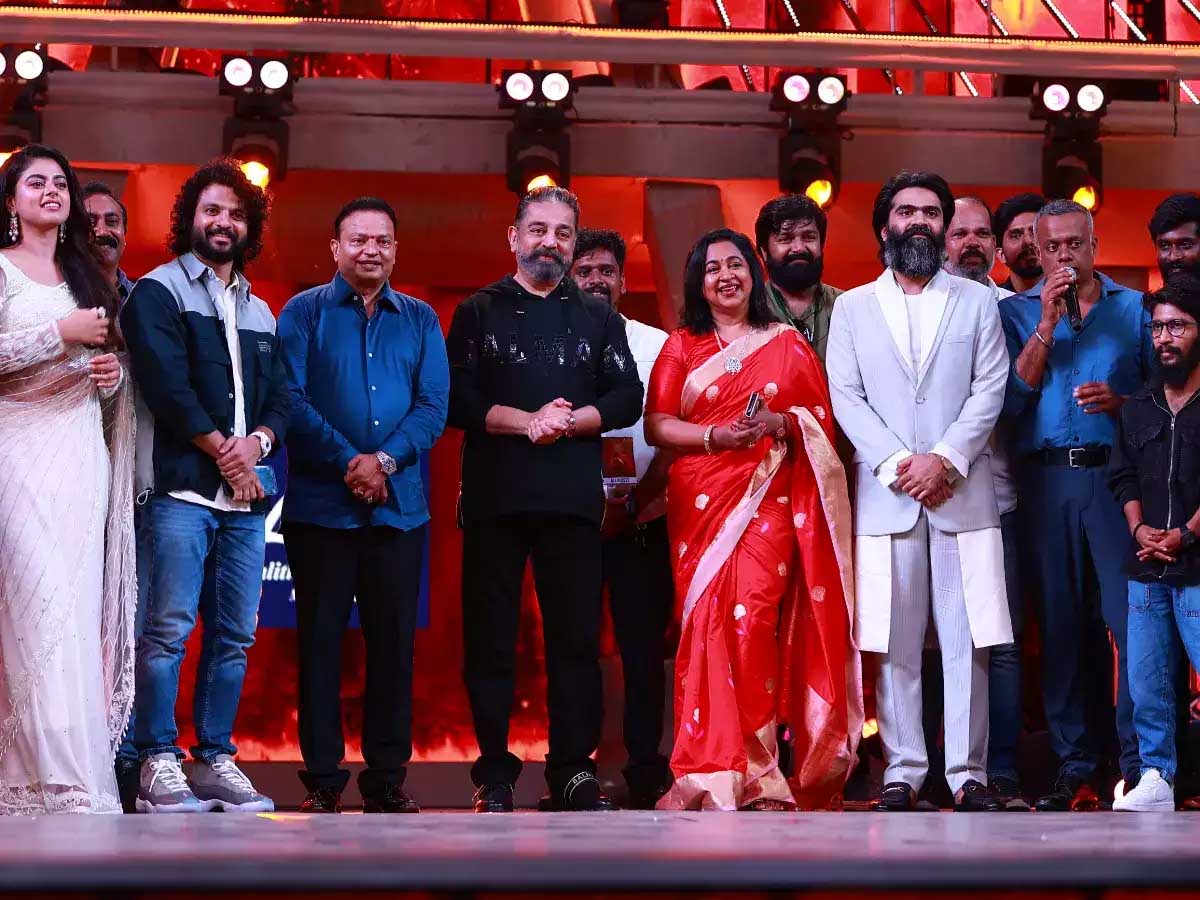 Actress Radhika Sarathkumar said, “I congratulate Ishari Ganesh sir for making this movie. There are two heroes present here – AR Rahman and Simbhu. I have known Simbu from his childhood. I always used to scold him that he isn’t properly making use of his talents. He has gone beyond his usual paradigms and has given a stupendous performance in this movie. There are lots of surprises for the audiences in this movie. I am sure that everyone is going to like this movie in the theaters.”

Actress Siddhi Idnani said, “I am getting excited and elated for this beautiful occasion. This opportunity means a lot to me. When the announcement of this film happened, I thought whoever might be the heroine of this film, she is lucky to be a part of this magnificent project from the Gautham Vasudev Menon-STR-AR Rahman trio. However, I was completely awestruck when the offer came to me. It’s a long run dream for any actress to be a heroine in Gautham sir’s movie. The importance he gives to the heroines in his movies is very well known to everyone. Simbu is an extraordinary actor, and working with him was a wonderful experience. AR Rahman sir has been an important part in my different stages of life through his musical score. The movie has come out really well, and I request everyone to support this movie.”

Music Director Yuvan Shankar Raja said, “Simbu is a big talent and he has seen all the fame and acclaims at his early stage of career. He is a man of humanity and kind heart. He has learnt all the arts involving film, and he is sure to garner tremendous results with this movie.

Actor Nasser said, “Gautham Vasudev Menon is known for giving us surprises. I am confident that he is going to rock with the same paradigm in this movie. His movies always have unique and appealing titles. Simbu is a genius actor, and this movie is going to earn him phenomenal reception.”

Producer RB Choudary, Super Good Films said, “Director Gautham-Simbu-AR Rahman combo is always special and we will definitely have a good takeaway with their movies. Moreover, with a reputed banner like Vels Film International producing VTK, we can definitely expect something special.”

Actor RJ Balaji said, “Simbu is a talented actor, and I would often keep telling him that he can scale great heights with the talents he owns as an inherent quality. I am so happy to see him taking up new-dimensional movies like Maanaadu, Vendhu Thanindhathu Kaadu. Gautham Menon has now started appearing frequently in the movies. Vels uncle is like my father, and his love for cinema is unfading and huge. He has done so many things that I requested him. I am sure that the movie is going to scale greater heights.”

Actor Jiiva said, “I am glad to see such a grand event. Vels Film International has been doing a great job by producing good content-driven movies and entertainers. The GVM-ARR-STR trio combo is something the entire film industry and fans always keep looking up for. The fans are always assured that something new is on the way to enthral them. I have already worked with Gautham in a movie. He is a classic filmmaker. He always aspires to create new-fangled movies. I wish the entire team for the grand success of this movie.

Producer Ishari K Ganesh said, “Shri Kamal Haasan sir is my mentor of arts and cinema. I am really happy that he is a part of this event. My brother like Simbu shed more weight for this movie and has rendered an awe-inspiring hard work for this movie. The movies from the production house of Vels Film International will always have good contents. Gautham Vasudev Menon has done a fabulous directorial with this movie. I am confident that VTK will be liked by audiences from all walks of life.”

Actor Silambarasan TR said, “I have never experienced such a grand event pertaining to my films, anywhere in the recent times. When I walked into this premise, I started wondering if it is really my event. Kamal Haasan sir is here, and he was the special guest for my movie Vinnaithaandi Varuvaaya event as well. Hence, I believe that VTK will be a great hit like VTV. Producer Ishari K Ganesh sir took care of me as his own son. He was the reason behind getting my father’s treatment done at USA. This is my third movie with Gautham Vasudev Menon and every time we come together, there will be a magic. We always strive to give something unique, fresh and different. Vendhu Thanindhathu Kaadu will also have that element. AR Rahman sir always gifts beautiful songs for me. Siddhi is making her debut through this movie, and she has done a fantabulous job. I thank all my co-stars and technicians in this movie for a great work. Initially, we were supposed to do a love story, and then I asked Gautham, if we can do something different and fresh. That was the time, when Jeyamohan’s script came to me. I have donned the role of a 19-yr old boy in this movie. We shouldn’t praise our own film, and fans should do it. I am sure that everyone will like this movie.”

Actor Kamal Haasan said, “The title Vendhu Thanindhathu Kaadu inspired from the Bharathiyar’s poem is my favourite line. Much alike the following lines in the poem, I am sure that there will be spark throughout the movie. The entire of Vels is like my own family. I haven’t contributed to Tamil cinema on my own, and it’s the movie industry that escalates and degrades itself. The industry must keep giving new and fresh movies, and fans are always ready to accept it with red carpets. No particular or individual actor has elevated the standard of Tamil cinema, but it’s the fans, who have done that. Silambarasan is a great hard worker. I want to see Simbhu shedding joyful tears during the success meet of this movie. Gautham discussed the gist of Vettaiyaadu Vilaiyaadu 2 before a couple of years ago, but CORONA played a spoilsport. But it will definitely happen again. Vels Film International has been asking me to a do movie for them, and I am not ready to miss out such opportunities. We will finalize the project at the earliest.”

Written by Jeyamohan, the movie is directed by Gautham Vasudev Menon and is produced by Dr. Ishari K Ganesh of Vels Film International. AR Rahman is composing music for this album that has 5 songs. The movie will have the worldwide theatrical release on September 15, 2022.