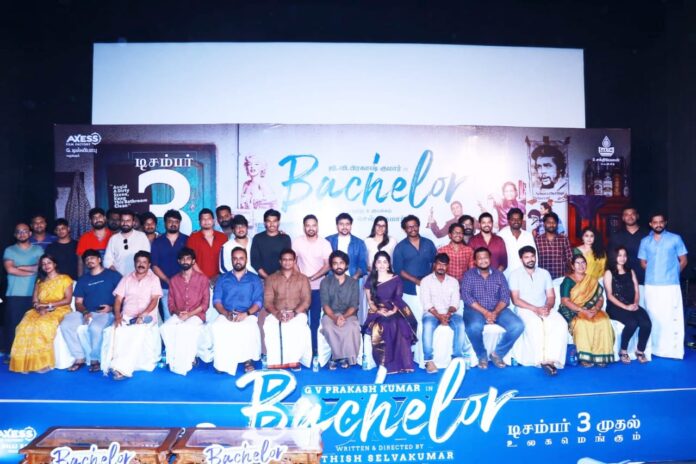 Following the grand success of Ratchasan and Oh My Kadavule, producer G. Dilli Babu of Axess Film Factory is all set to release his next production “Bachelor” starring GV Prakash Kumar and Divyabharathi in lead roles. Written and directed by Sathish Selvakumar, the film is all set for a worldwide release on December 3, 2021. The cast and crewmembers of this film interacted with press and media fraternity, and here are some of the excerpts from the event. 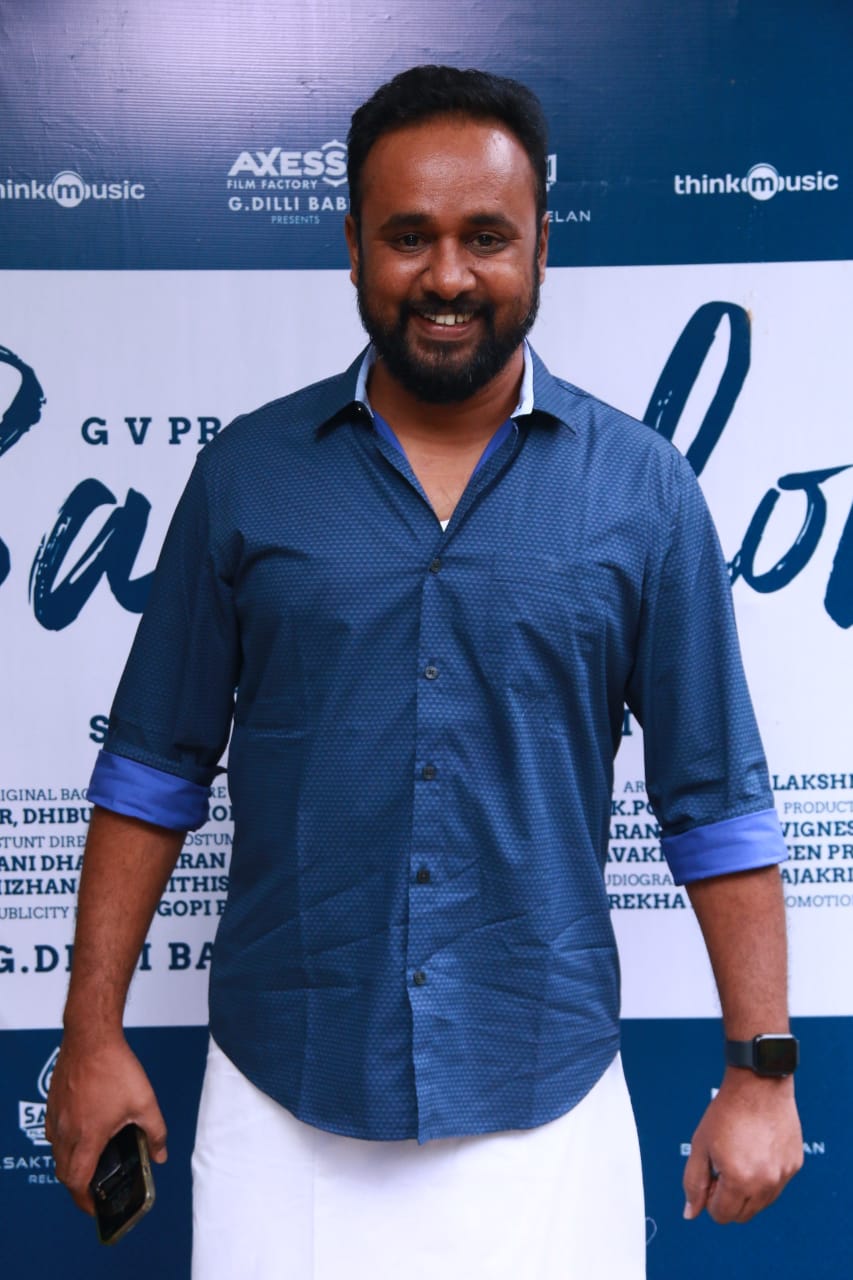 B. Sakthivelan, Sakthi Film Factory said, “I have already seen the film, and I am not able to define it completely, but all that I felt that this is an important film to every audience. This is a movie beyond financial and trade factors, but this movie left a strong impact on me even after waking up next morning after a deep night sleep. I thank producer G. Dilli Babu Sir, for materializing this film. After the success of Oh My Kadavule, he told me about the ‘Bachelor’ project. He was firm about one decision that it is a tailor-made movie for theatrical experience, and will never compromise with OTT platform at any cost. He would often keep sharing the best things about this project. He is a unique and rare kind of producer species as his involvement in shaping up a movie is phenomenal. Director Sathish is a new entrant in the Tamil movie industry, who is going to elevate the standard of our industry. Only few movies will have best output in all technical department and performances as with Shankar sir movies. I could feel the essence of this factor in this movie. Bachelor gave me an impact of watching a Shankar sir movie output at a low budget. While interacting with GV Prakash sir, I was raving about his songs in movies like Asuran. I doubtfully asked him if he would make a comeback in the acting part, but he assured that Bachelor will establish in full stretch as an actor.” 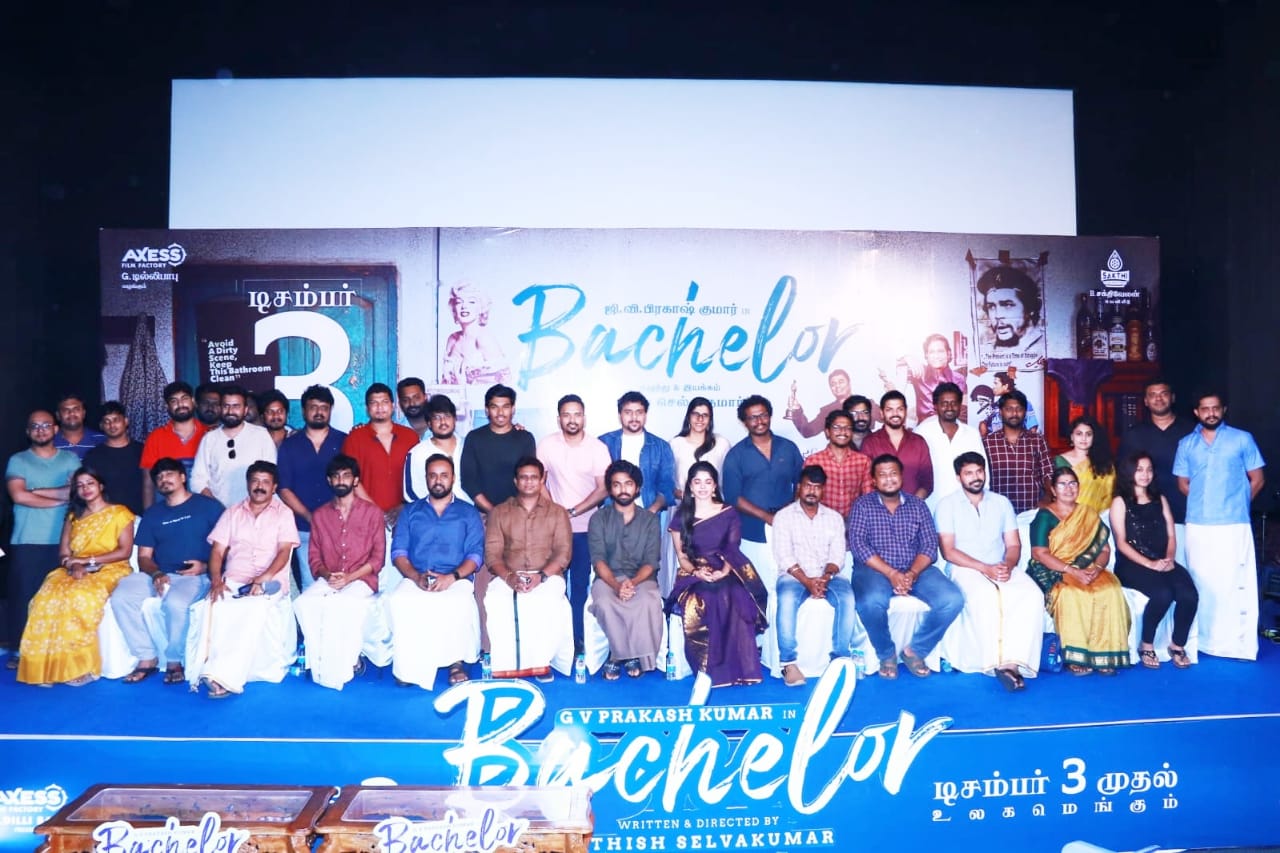 Choreographer Azhar said, “I am really grateful to be a part of a film like Bachelor. Choreographing for this project was completely different from my other projects. Before kick-starting the process, I listened to the song, and couldn’t visualize on how I am going to do it. Many have been commenting that the choreography is done in Kerala style, but then I would like to make it clear that it’s out and out Tamil culture dance with the lyrics taken from the ancient language. Working in this project was more like going to school and college, as everyday offered me a unique experience. Theni Eeswar sir is a genius, and he has exerted a phenomenal effort. Usually GV Prakash sir wouldn’t go for rehearsals as he is an one take artiste, but then he came for the rehearsals here, and has done a fabulous job. I thank Dilli Babu sir for trusting me and giving me an opportunity.”

Prankster Rahul said, “I haven’t done anything huge with this project. It was just a single day shoot, and I got a call after the director saw my performance in the medical prank show. Although my scene would be not more than a 5 minute duration, the director took an additional effort in getting my dubbing portions done greatly. This is a blockbuster movie, and I am sure about it.”

Music director Siddhu Kumar said, “This project is so special to me as myself and Sathish bro had earlier discussed so many projects, but they didn’t take off. I have done my best for this film, and looking forward to a positive response from the audiences.”

Director San Lokesh said, “Bachelor is an important movie in my career after Ratchasan. After completing the process, I told Dilli Babu Sir, the same fact that I stated after Ratchasan. “The first half is good, and the second half is extraordinary.” I just now saw the film, and it has come out very well. It’s a youthful film, and it has a good message for them as well. I wanted the transition to be smooth, and my journey with director Sathish is 11 years old. I am happy to see the output as it was discussed many times across these years between us. When a film gets connected with the society, it turns to be a meaningful experience. Bachelor is one such exemplification.”

Director Sathish Selvakumar said, “When Dilli Babu sir gave me an appointment to narrate me the script, I was doubtful whether he would accept it to get materialized. But sooner, I was surprised to hear him enjoying the script narrating process, and he asked me to wait for 3 months. From then, there was no stopping and the process happened in full swing. We worked on dubbing process for 107 days, but I don’t regret over it. I want to reveal it openly as we had to strain a lot over getting the particular slang perfectly. Any other producer would have been infuriated over this, but instead, kept us encouraging, by trusting us. ‘TRUST’ is something very rare in movie industry, and Dilli Babu Sir unconditionally banked his hopes on us. DOP Eeswar sir has done a fabulous job. His cinematography has given a unique colour to the film. GV Prakash Kumar’s dedication and involvement in this project is beyond usual paradigms. Normally, while shooting some additional shots, the actors would be getting some break, but then GV Prakash sir was insisted by me to be a part of all the shots. Any other artiste would become restless without breaks, but then he astonished me completely. Divya as a newcomer underwent 3 months of workshop, and her passion became a major key in letting her become an important asset to the Bachelor movie. Her role is very much equally prominent to the protagonist’s role, and she has nailed it perfectly.

Actress Divya Bharathi said, “When Sathish narrated me the script, I felt more responsible. I was little scared if I would be able to bring the long run vision of Sathish exactly as it involved his years of hard work. I thank producer Dilli Babu sir for giving me an opportunity to be a part of this project. GV Prakash sir has been completely helpful. I am sure the audience will enjoy and relate this movie.”