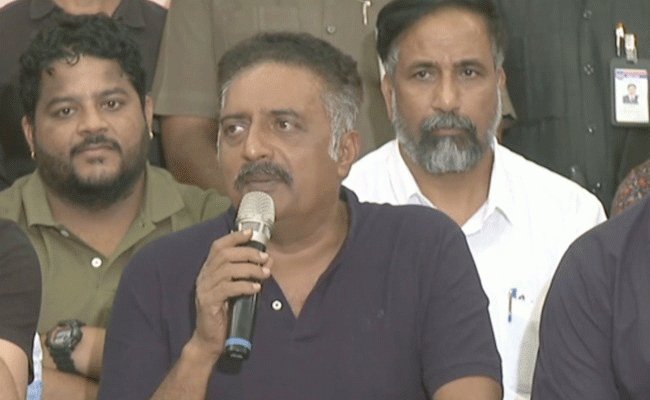 In a new twist to the bitter row over the just-concluded elections to the influential Tollywood trade body, Movie Artists Association (MAA), all 11 newly-elected office-bearers and executive committee members from the Prakash Raj panel announced their resignation on Tuesday.

Stating that they do not want to be a hurdle in the decisions of the new MAA president, actor-producer Manchu Vishnu, and his panel over the next two years when they will be in office, the dissenters parted ways with the association.

Prakash Raj, the acclaimed character actor who made his displeasure with the elections known to all, said his supporters had quit because in the past two years, no work could take place in the association because the two rival factions were constantly at loggerheads.

“Vishnu has made big promises, so we felt our presence may be cited as an excuse for not fulfilling them. Hence, we have decided that we should not be a hurdle in the way of their decisions,” Prakash Raj said.

He added that they had reached this decision after detailed discussions and deliberations over whether they could work “in this kind of an atmosphere” in the MAA.

“It is a dignified decision,” Prakash Raj said. “Please run the show, but if there are shortcomings, we will question you on behalf of all those who voted for us,” he added.

Referring to Vishnu’s statement that he would not accept the resignation, Prakash Raj said he was ready to take back his decision if Vishnu assured him that he would not amend the bye-laws of MAA to prevent non-Telugu members from contesting the elections in future.

Prakash Raj alleged that there was “rowdyism” in the election and there was cross-voting and irregularities in counting. He also said outsiders from various places were brought in on the polling day and seniors such as Benarjee were manhandled and abused.

He pointed out that on the first day counting was taken up for 4-5 hours and it was said that the results would be declared the next morning, but it took the entire day for that to happen.

Benarjee broke down while narrating how was he was humiliated during the polling. He said Vishnu’s father and veteran actor, Mohan Babu, used abusive words against him and even tried to manhandle him. He said when Mohan Babu was shouting at Tanish, he came to the latter’s rescue, making Mohan Babu lose his temper and use abusive language.

In Sunday’s elections, Vishnu was elected MAA President defeating Prakash Raj by 109 votes. The Vishnu panel won the key posts of General Secretary, Treasurer, one Vice President and one Joint Secretary. In the elections held for the 18 Executive Committee members, the Vishnu panel bagged 10 seats, whereas the opposing camp won the remaining eight.

Megastar Chiranjeevi’s brother Naga Babu had also announced his resignation late on Monday. He said he was pained to see regionalism and intolerance rocking the apex body of Tollywood.