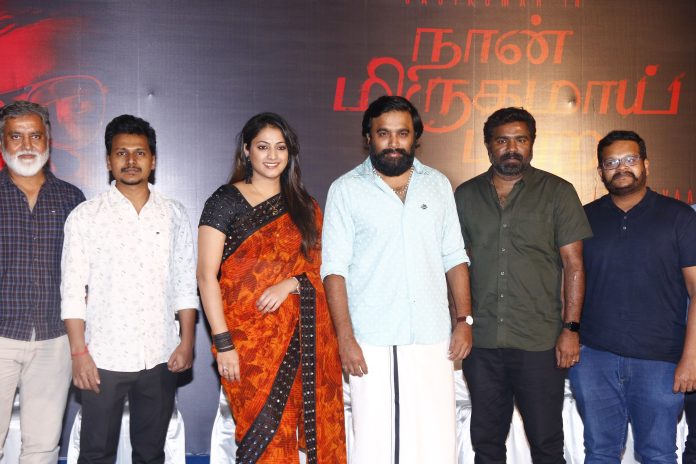 Produced by Chendur Films International and directed by Sathyashivaa, this film is all geared up to hit the screens this Friday (18.11. 2022).

The team met the press yesterday (15.11.2022) and had an interaction with them, followed by the special screening of a ‘Single shot action sequence’ from the film.

I was very happy to know that the film is based on sound.  Initially, I was doubtful whether Sasikumar would fit the role. However, he surprised me by portraying the life of a sound engineer quite naturally and impressed everyone on sets with his realistic performance. Ghibran’s background score has added strength to the film.

We have tried out a new style of editing for this film. Hope everyone likes it. I have seen Sasikumar from a distance when I was in college. I am very happy that I am working with him right now.

I really liked director Sathya Shivaa self-confidence. He intended to craft a novelty in the background score of this film. He insisted that a new flavour of music should be made and it has to be from the sounds we hear on a daily basis, rather than the sound of musical instruments. Though it was initially difficult to understand, later I comprehended and composed the music as per his requirements.

The editor has adopted a different method in the film which will be a talk of the town. Also, there will be a momentum in the film right from the beginning.

Sasikumar and I are now coming together after ‘Kutti Puli’. I am very excited for the release of the film.

Sathyashivaa, the director of the film, said:

We have followed something new in this film. When you look at it as a film, you will definitely like it. For example, there is a pattern in this film. In the initial phases, I felt it difficult to convey this to the cast and crew. But I am very happy with the way the film has evolved right now. I hope people like and support the film, despite the violence which is much needed.

When I narrated the story of the film to Sasikumar over the phone during the Covid-19 lockdown, he readily agreed as it was way different from his style. I have to say that he has lived in this film as an actor, forgetting the director within him.

Ghibran was very happy when I told that there were no songs in the film. We all know that he is a master of background music!  Ghibran has proved it yet again.

Cinematographer Raja should be praised. Three-fourths of the film’s scenes were shot either at night or in the rain. He worked in this film with full dedication without frowning even for a second.

Hariprriya, the female lead was approached with her character-arc, where she plays the mother of a six-year old child. Surprisingly, unlike many other heroines, she did not hesitate, but realised the depth of the story and the importance of her character and immediately agreed upon. The beauty of her character is that she will be seen not as a heroine but only as Sasikumar’s wife.

All the artists who have worked have brought out what I expected very well.
After this film gets released, I am very sure that Vikrant, Sharad Ambani and Shankar will frighten you.

There is a scene in the film where a red paint is poured on Sasikumar! Since it would be very difficult for him, we planned to shoot the entire scene in a single take. Hence, we rehearsed for the same for eight to ten days. This is how the epic fight scene was created.

I was last seen in ‘Vallakottai’ in 2010 under the production of Chendur Films International. Since then, I have acted in many Kannada films. I was waiting for a perfect script and crew to act in Tamil again. That’s when director Sathyashivaa saw my Kannada film ‘Bell Bottom’ and approached me for this film. I liked the story very much and agreed with it. The film has a lot of expectations not only in Tamil Nadu but also in Karnataka. I play the role of Anandhi – a girl next door who is Sasikumar’s wife and a doting mother to a six year old. When they first approached me, they told me about the child in the film. I readily agreed since my intention is to always try something new and this script has a scope for the same.

It has been a year since I acted in the film. The film was originally titled ‘Common Man’. Then that title was changed to ‘Naan Mirugamaai Maara’. There will be a lot of violent scenes in the film. However, the emotions of an average man are used correctly in the story with the usual family sentiments. I’d also like to add that Ghibran’s background score has added strength to the film. This is the first time I have worked in a film without a song. I was very happy that there was no dance in the film. The role of a sound engineer was very different for me, who had always roamed around in the field with a dhoti as a village hero. I watched sound engineers Lakshmi Narayanan and Udhayakumar closely before undertaking this role. Everything in the film will be new. We have all worked hard for this. The entire team has realised their importance and has contributed well. I’m not saying that the film is like this, it’s like that, you just look at it and tell me how the film is.

Concluding in his usual style, he also revealed that another film of his titled ‘Kari’ is releasing next week.