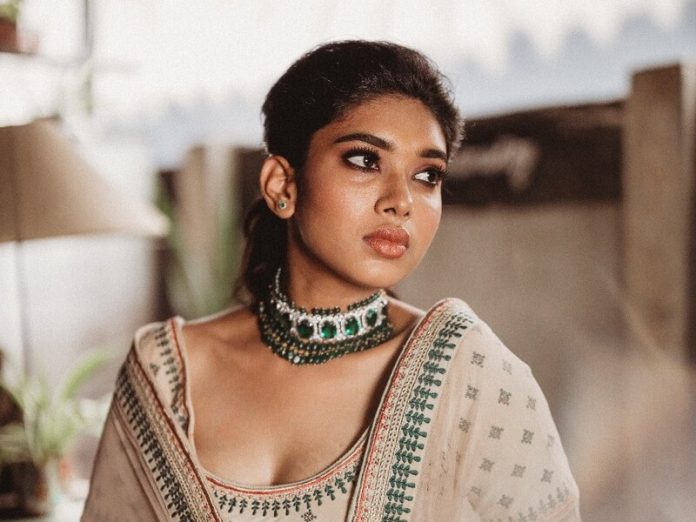 There has been a long-time desire among the K-Town audiences to see an actress with excellent command over Tamil linguistic skills. And, it’s an exhilarating scene for them to see new talents with these great potentials making their way into the industry. Precisely, Dushara Vijayan is one among them. With a sheer passion for acting, the young actress hailing from Kanniyapuram near Dindugal patiently waited for nearly 6 years for a breakthrough in the industry. She made her onscreen presence through the movie ‘Bodhai Yeri Budhi Maari’ then ‘Anbulla Ghilli’ followed by a short feature titled ‘Kannamma’, which garnered her phenomenal response.

However, she found her magnum opus offer through the movie ‘Sarapatta Parambarai’ featuring Arya in the lead role, directed by critically acclaimed filmmaker Pa. Ranjith. Actress Dushara says, “Ranjith sir happened to see my pictures on social media and gave me a call asking if I have fluency in the Tamil language. Well, this inherent quality of mine got an opportunity for the audition, where I was asked to do a couple of things – Scream as loud as possible, which instantly got an ‘Okay! You’re in’ reply from Ranjith sir. Then I was asked to enact an emotional scene from the film. I appear in Sarapatta Parambarai only by the second half, and my character Mariamma is someone bold and outspoken. Although I had fluency in Tamil, adapting to the North Chennai slang was challenging in dubbing. During the shoot of this film, Vasantha Balan sir happened to visit our sets, and eventually asked me to meet him in his office. It was a dream come true moment for me to be a part of his film. The film features Arjun Das in the lead role and, I play the role of Subbulakhsmi. She is someone completely in contrast to Mariamma.”

Dushara winds up saying, “It’s really great to see that many talented actresses with Tamil speaking qualities are getting big opportunities. All that I have understood observing is that if you’re talented and have an insatiable passion for acting, you’ll never go unnoticed. I desire to play substantial roles irrespective of what the genre is. I want to be in the league of road-less traveled actresses like Parvathy Thiruvothu and Nayanthara.”