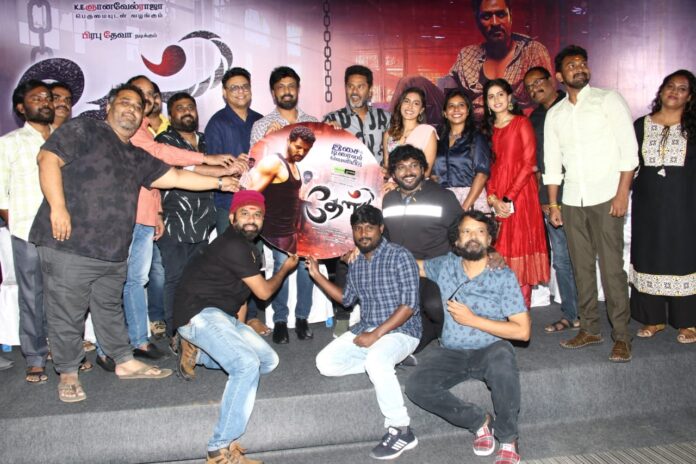 The audio and trailer launch of Prabhu Deva starrer “Theal” was held this evening in Chennai, which witnessed the presence of eminent personalities from the movie industry. The film is directed by Harikumar and is produced by Studio Green K.E. Gnanavel Raja. Prabhu Deva and Eeswari Rao have played the lead roles as mother and son. C Sathya has composed music for this film.

Here are some of the excerpts from the occasion.

Actor Prabhu Deva said, “Director Harikumar has done a fabulous job, and his efforts are beyond usual limits. Art director has come up such a brilliant work that audience will really feel difficult in analyzing whether the locations are original or set work. I thank Dhananjayan sir for heartiest wishes. The dubbing process for the movie was really interesting as I completed the process by half a day. Music director Sathya sir reminds me of my chemistry teacher in school. He has done a great work and we will be working together in many movies. K.E. Gnanavel Raja sir’s journey as a producer has been tremendous and the movies he has created and released are blueprint for many aspiring producers. Hari and I have been close friends for years. We worked as assistant choreographer and now he is all set to prove his brilliance again. This was a real different experience for me as this movie doesn’t have any dance moments for me, and I am an left-handed character, which made me feel this is a first time movie for me. He would always keep a check on my limit and would instantly inform if I am moving back to my routine performance. Eeswari madam is one of the prominent artistes in the Tamil movie industry. Samyuktha is a bubbly performer and her acting is going to be a special highlight. I thank Anbariv for their support, and their contribution has been a big part in enhancing the movie. Theal will be an intense movie and will be definitely liked by all.” 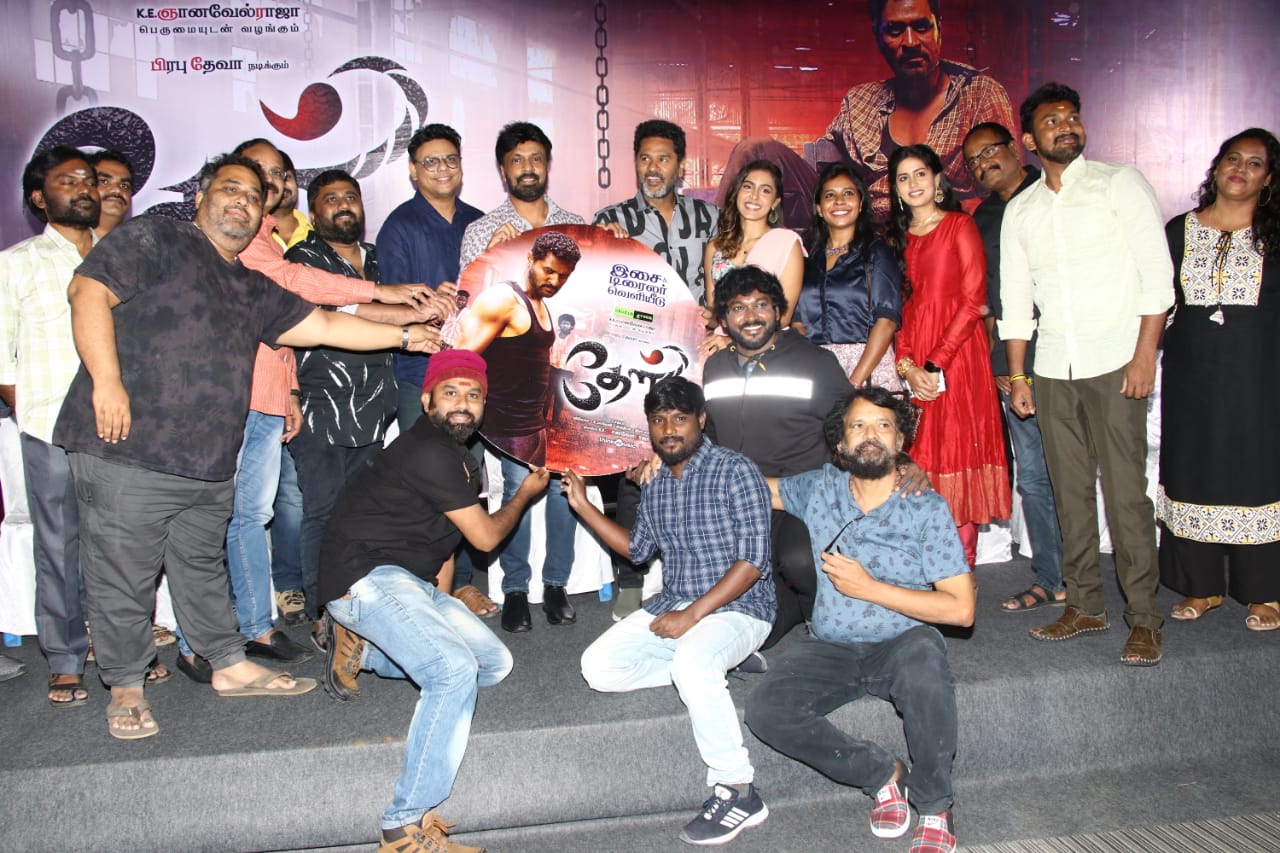 Music Director Sathya said, “It’s a blessing and gift to be scoring music for Prabhu Deva sir’s movie. Harikumar sir wanted me to be a part of this movie because BGM has a vital role in this movie. There is a particular scene in the movie, where Prabhu Deva sir hugs his mother, and I felt it heart-touching. I personally told this to Hari Kumar sir. Hari Kumar sir always believes in slow and steady process. Prabhu Deva sir’s performance will be critically acclaimed. The other actors have indeed delivered an incredible performance. Theal will be a special movie for audiences as they can relate to it personally.” 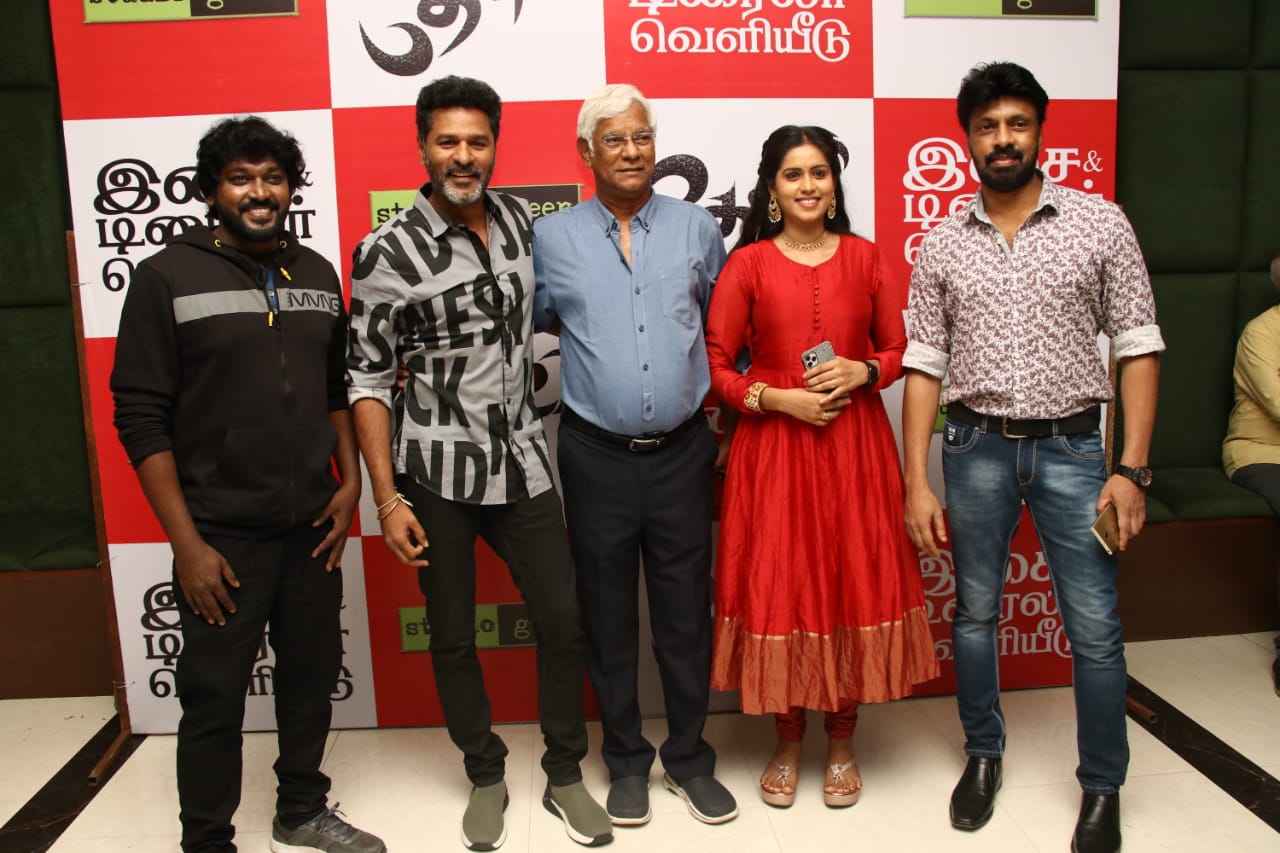 Director Hari Kumar, “K.E. Gnanavel Raja sir is the main reason why I am here. I thank him for banking his hopes on me and this project. The significance of Theal (Scorpion) and its relevance with the movie will be prevalent here. Usually this creature gives birth to 40 offspring at a time, and will carry all of them of its back to keep them safety. On the other hand, it will kill itself if a drop of alcohol is spit on it. Moreover, it is scientifically proved that individuals bitten by scorpion will not get heartache. There will be whole lots of elements in this movie signifying this nature. Music director Sathya and the 4 lyricists have been incredible in enhancing the emotional aspect of the movie. Prabhu Deva sir gave a lot of suggestions in shaping the lyrics. The mother-son relationship in this movie will be more relatable to all. Art director Senthil has done a fabulous work with Koyambedu market sequences. The reason behind many prominent actors being a part of this movie is because of their desire to share the screen space with Prabhu Sir and another reason is this movie produced by K.E. Gnanavel Raja sir. Eeswari madam has been a huge support to this film. She has delivered an excellent performance as a mother. Samyuktha has come up with spellbinding work. It’s nice to see everyone after the pandemic season and I thank the producers for this beautiful arrangement.” 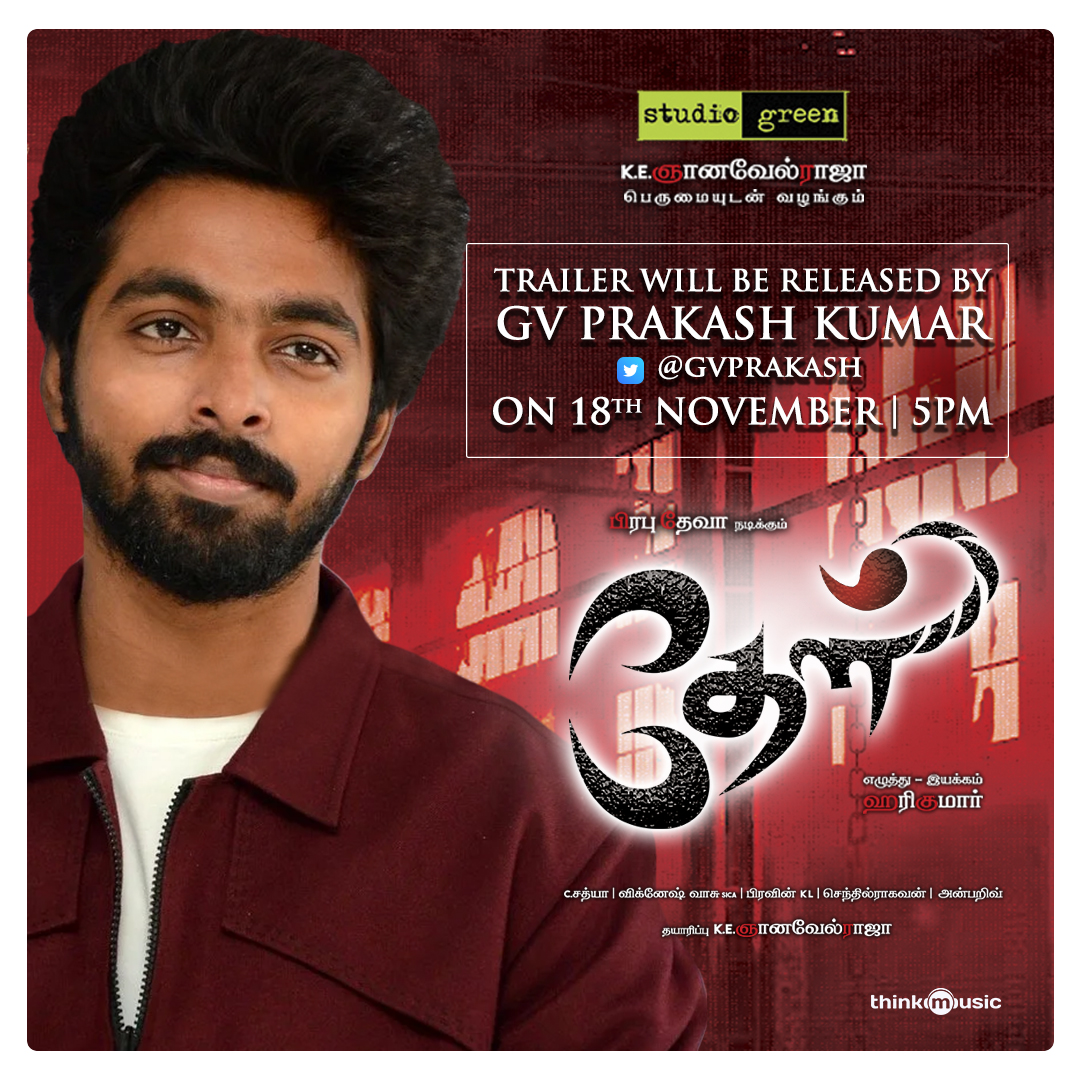 Producer G Dhananjayan said, “I have already watched this film and it’s going to be an important film in the career of director Harikumar sir. Personally, I felt this is the best-ever movie of Prabhu Deva sir for his performance is colossal. Everyone has watched Prabhu Deva sir’s dance performance and action packed spell, but Theal will establish him as a performance artist in an emotional premise. This will be more like a benchmark of how ‘Nanda’ was for Suriya. He has done an extraordinary work in the sentimental scenes. Every actor and technician in the movie have done a remarkable piece of contribution, and I extend my advance congratulations for the success. Dialogues are going to be an important highlight. Samyuktha has always been far-famed for her dance, but it’s a surprise to see her in a different dimension, and her performance is going to be lauded to a greater degree. This will be a milestone for producer K.E. Gnanavel Raja sir’s Studio Green Films.”

Producer K.E. Gnanavel Raja, Studio Green Films said, “Studio Green Films has always made movies that are commercially successful and content-driven. Theal will be one such movie. This movie will be different experience for the entire team. Right from childhood, I have been an ardent fan of Prabhu Deva sir after Superstar Rajinikanth sir. His younger brother Nagendra Prasad and I are school classmates and we used to watch all the movies together. One day, I went to his house and got to see the rehearsal that Prabhu Deva sir was doing, which made me literally spellbound. I got an opportunity to meet him personally during the Malaysia program. Prabhu Deva Master is a perfectionist. As a producer, I was really enthralled with his dedication and never had a single issue from his end. This movie will be different experience for all as director Harikumar has done a unique treatment. Prabhu Deva sir and other actors will not have more dialogues, but will be more performance oriented like how Sivakarthikeyan sir didn’t have dialogues in the Doctor movie. In fact, Yogi Babu sir and heroine have more dialogues. Eeswari madam has done a great work, and this movie will make audiences make miss their mother after watching this movie. Theal will be a unique experience for the family audiences.”