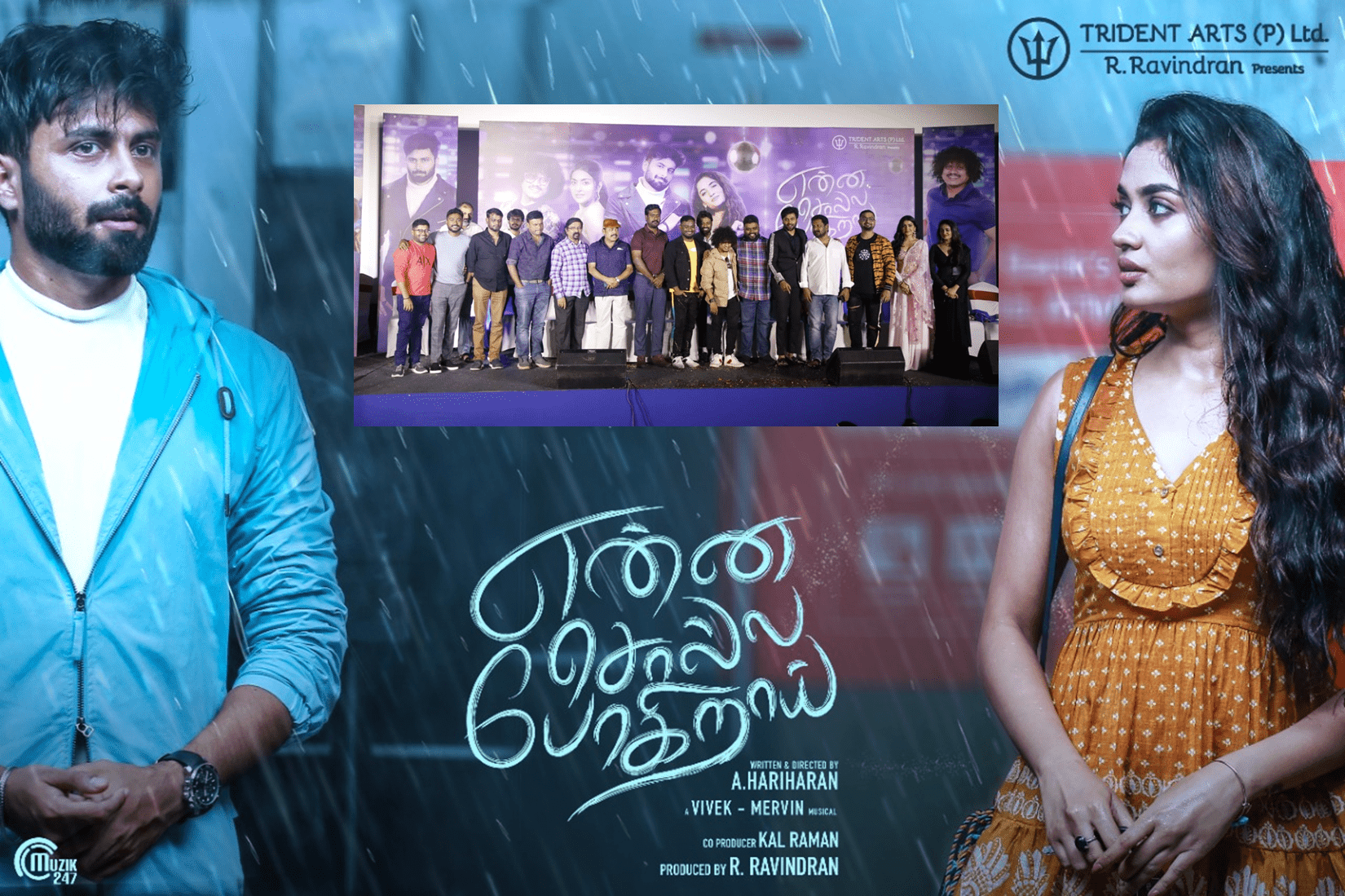 Producer R Ravindran of Trident Arts is all set to release his upcoming film ‘Enna Solla Pogirai’ on December 24, 2021. The movie is directed by A Hariharan and features Ashwin Kumar, Avantika Mishra and Teju Ashwini in the lead roles with Vijay TV fame Pugazh playing an important character. With the film releasing on December 24, 2021, the audio launch of the movie was held today. Here are some excerpts from the event. 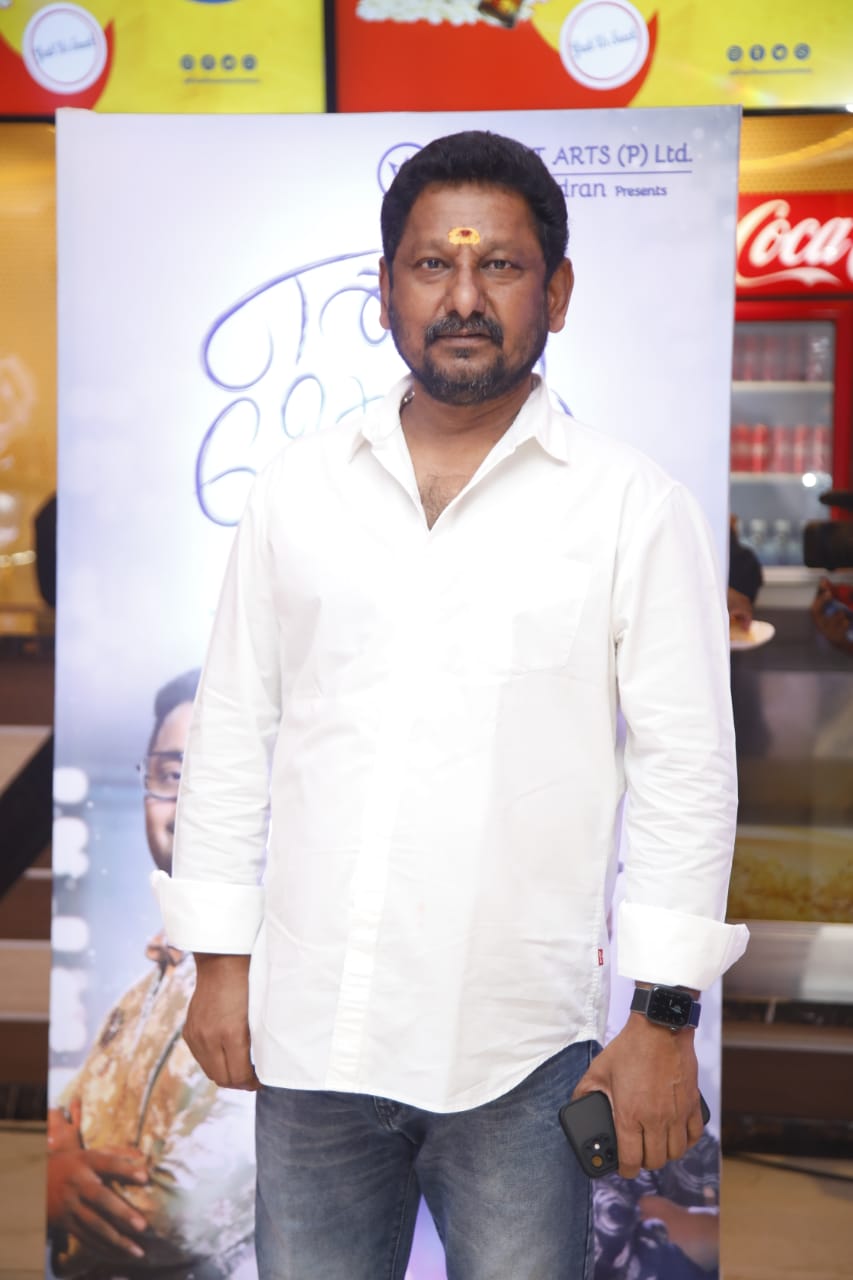 Producer Trident Arts R Ravindran said, “It’s an emotional and special moment for me as I have got a beautiful team of experts in this project. Enna Solla Pogirai will be a beautiful treat for all the audiences. Why I feel this project so special is because getting a talented actor like Ashwin, two great heroines, top-notch technicians. I request fans, press and media friends to be supportive towards this film and all the forthcoming movies produced by Trident Arts.”

Choreographer Afzar “I thank everyone for making both the songs released till now a big Chartbuster. If not for the support of Ravindran sir and director, this would have not been possible. Cinematographer Richard sir helped a lot in getting the superb visuals. I am happy to have Vivek and Mervin composing music. Keerthi’s costumes have made the songs look richer. Editor Mathi had to experience my uttermost torture and that’s the reason why the video song was able to get released. Both myself and Ashwin started practicing for Follow Me. This is one good reason why the song has come out very well.”

Costume Designer Keerthi Vasan said, “I thank director Hariharan Anna for giving me an opportunity to be a part of this film. He had told me the story 3 years ago, and it’s been a great journey working with him. Producer Trident Arts Ravindran sir didn’t only support me emotionally, but made sure that the project gets a good output with lavish budget. I am grateful to actors Ashwin and Pugazh for being cooperative.”

Editor Mathi said, “I thank producer Ravindran sir and director Hariharan for giving an opportunity to be a part of this film. I had known this script before a long time and as a team, we had brewed with its essence. And now to see the final product is so much appealing. The film has come out really well, and will be definitely appreciated by all.” 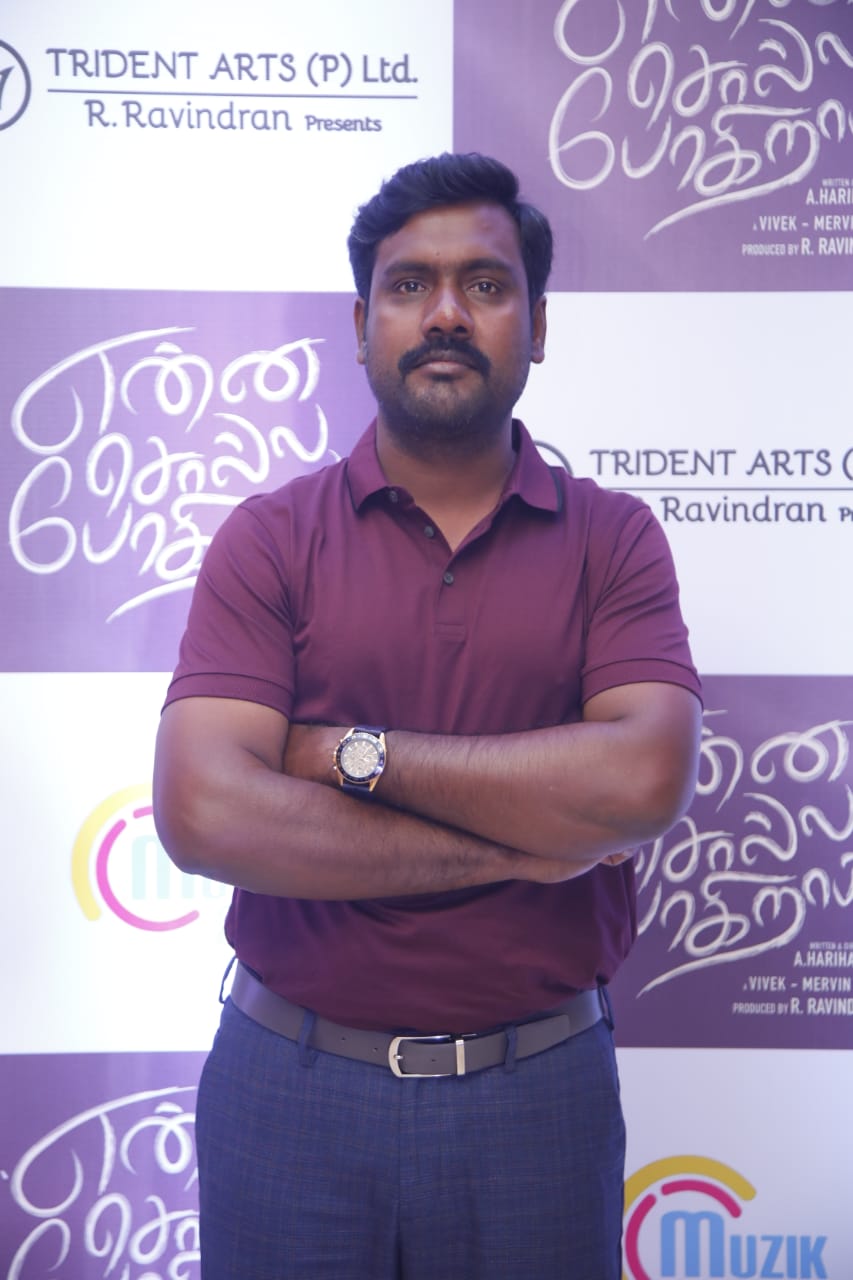 Cinematographer Richard said, “Moms at home cook food daily based on different emotions, but when it’s her son’s birthday, it would be more special. Similarly, although I have worked in many projects, Enna Solla Pogirai is something special and close to my heart. I am glad to be a part of this film. It has lots of sweet and emotional moments. It will be a movie tailor-made for audiences from all walks of life.”

Music director Vivek-Mervin said, “Enna Solla Pogirai is a movie that is introducing 8 individuals. I am congratulating them in advance and wish they become more and more successful with at least 100 movies in their career. I thank music lovers for making the songs of Enna Solla Pogirai a good hit.”

Music 24/7 Zameer said, “I congratulate Ravindran sir for making a movie like Enna Solla Pogirai. Ashwin will definitely scale great heights with every film he does from now. I am glad to be taking the beautiful songs from this album and reaching it towards the music lovers.”

Director Prabhu Solomon said, “I wish the entire team for the grand success of this film. Director Hariharan showed me visuals of Ashwin’s performance, and I was spellbound over his acting. Romantic films’ success mainly depends on Music, and Vivek-Mervin duo has delivered splendid numbers. Ashwin is now my son. He has now gained lots of maturity, and his choices of movies are good. He is putting forward an immense hard work towards all his projects. He will scale great heights and elevate his career graph. Producer Ravindran deserves special mention for coordinating a beautiful team for a beautiful project.”

Actor Thambi Ramaiah said, “Ashwin has become the heartthrob of youngsters today. I wish Vivek and Mervin to be united as Vishwanathan-Ramamoorthy forever and deliver fabulous music. Cinematographer Richard has a sound knowledge towards script. Director Hariharan has brought forth his visualization into materialization with Enna Solla Pogirai. Producer Ravindran will definitely escalate the career graph of Ashwin to a greater level. Ashwin himself knows it and that is the reason behind completely dedicating himself. Pugazh is a good chap. I pray to God that the film must become a blockbuster hit.”

Choreographer Sandy said, “Ashwin is very close friend of mine. The trailer of Enna Solla Pogirai was so impressive and it clearly registered that director Hariharan is here in the industry to create more magic. My most-loved Pugazh has done a good job. Teju Ashwini is a good dancer and she has done a good job. I wish the entire cast and crew for a grand success of this film. I will definitely shake legs for the songs during the success meet of this film.”

I am proud and glad to see my brother’s son Ashwin scaling greater heights in the industry now. The title itself is so much engrossing and admirable. The musical magic of music directors Vivek and Mervin enthralled me greatly. Director Prabhu Solomon is directing Ashwin in his next movie, and I wish him in advance for the success of this movie. This film’s entire process was smooth and was completed without any hurdles. Today, even a small calendar can create zillion problems for a movie, but the only genre that doesn’t have any issues is ‘LOVE’ in both real and reel. As an uncle, I haven’t done anything great to my nephew Ashwin, but I thank Vijay TV and producer Ravindran for being a great pillar in enhancing his career graph. I am elated to see the huge fan following base of Ashwin, and I wish a grand success to this film.”

Actress Avantika said, “The journey with Enna Solla Pogirai is so close to my heart and special to me. Becoming an actress has been a long time desire and it has come true now. Ashwin was a great support to me. The songs have come out really well and I am so gleeful to the positive reaction from audiences.”

Actress Teju Ashwini said, “I am so happy to see the emotional love of people for Ashwin now. I thank producer Ravindran sir and director Hariharan for giving an opportunity to be a part of this film. Hariharan took more efforts in crafting my character with depth. I am so thankful to him for taking additional care and encouraging me to perform well. The entire crew has worked so hard and the results will be more favorable for them. This is the first time I am a part of big project. I request the media, press and audiences to support all of us and make this film a good success.” 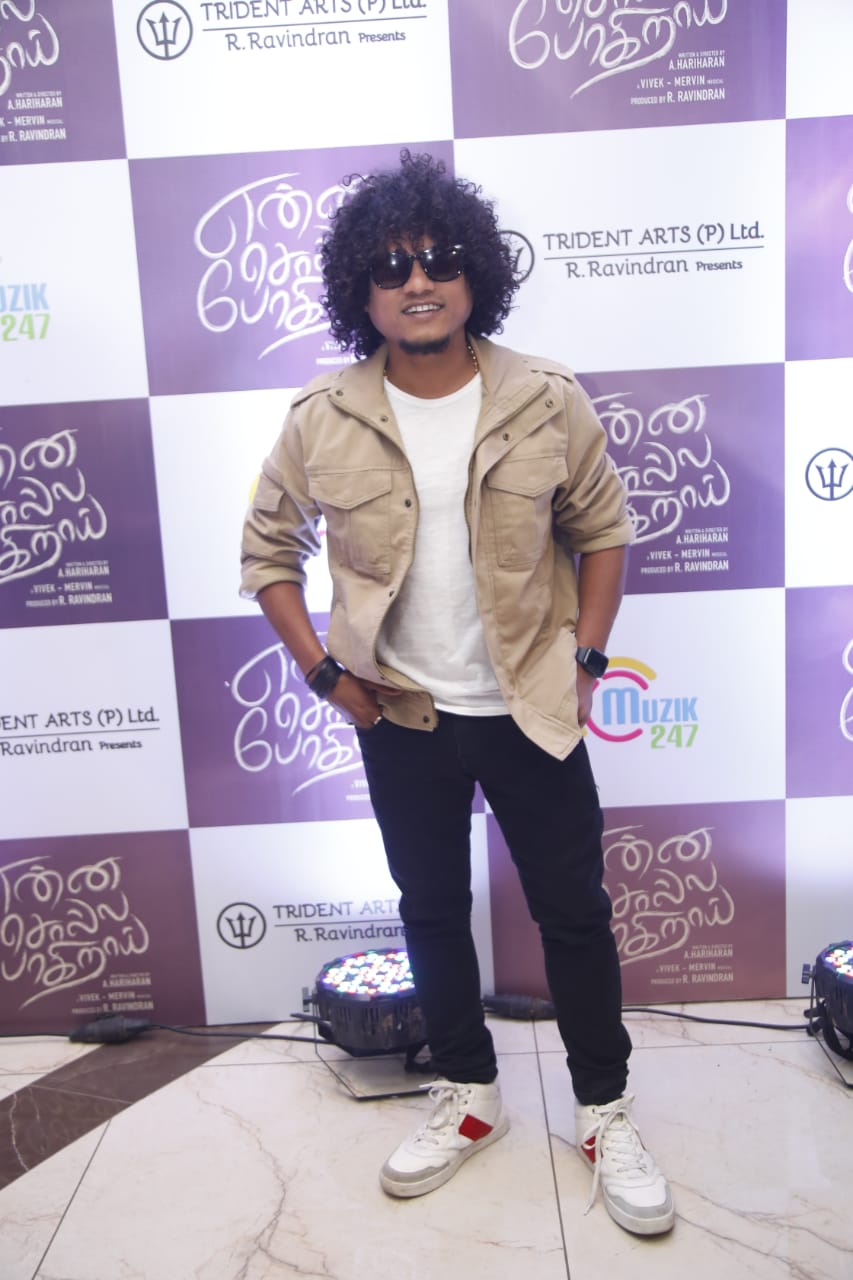 Actor Pugazh said, “I thank my fans for making me scale great heights. I was completely surprised, when Ravindran sir called me to his office, gave a cheque and informed me that I am doing a project. After that, I didn’t get any calls for 5 months. Later I was happy to hear that Ashwin is playing the lead role. For director Hariharan, it’s 7 years of hard work. He humbly requested me not to do any comedy acts, and I strictly followed his instructions, which has now given good results that we all are seeing in the trailer. The whole process of working in Enna Solla Pogirai was an enjoyable experience. The songs have already become grand hits, and the movie will be a great hit as well.” 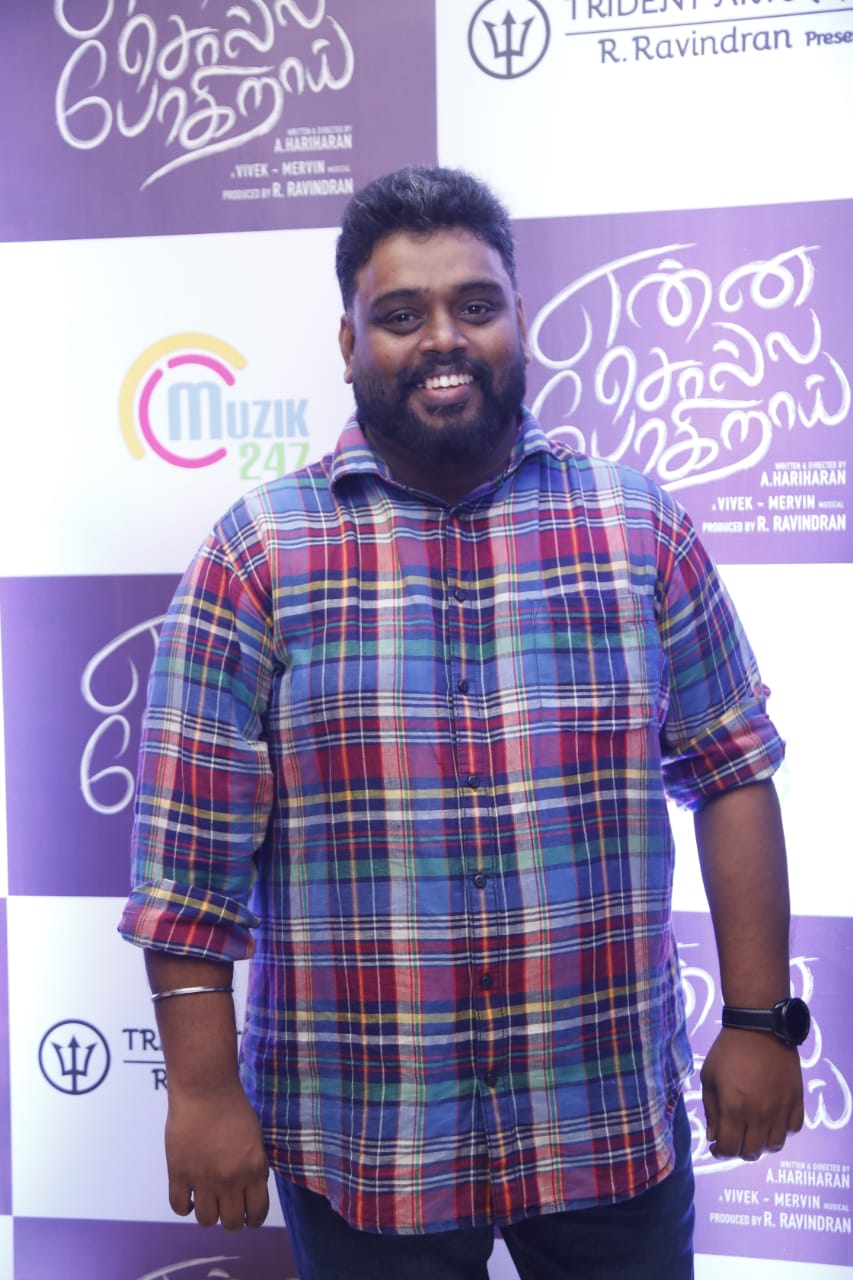 Director A. Hariharan said, “When you love and desire for something, the entire universe will come in favour of bringing it to you. Enna Solla Pogirai is one such film that has happened so beautifully in my life. Making a Romance film was my long time, and I am glad that it was welcomed by Ravindran sir, who is an ardent admired of Romance. Both Vivek and Mervin have made the entire album a great success. Initially, Pugazh’s role was actually meant for Vivek sir, but finally Pugazh came on board, and he has done a great work. Avanthika has done a fabulous job. Before getting Teju Ashwini finalized, we had to go through several considerations and she made us feel that she would be apt one for this role. When I am looking at the fan base of Ashwin Kumar, I am now getting a feel of having made a movie with a superstar. The combination of Ashwin and Pugazh will be more engrossing. Everything in this film was so lovely, and we are bringing the film for release on December 24, 2021. I request everyone to support the movie.” 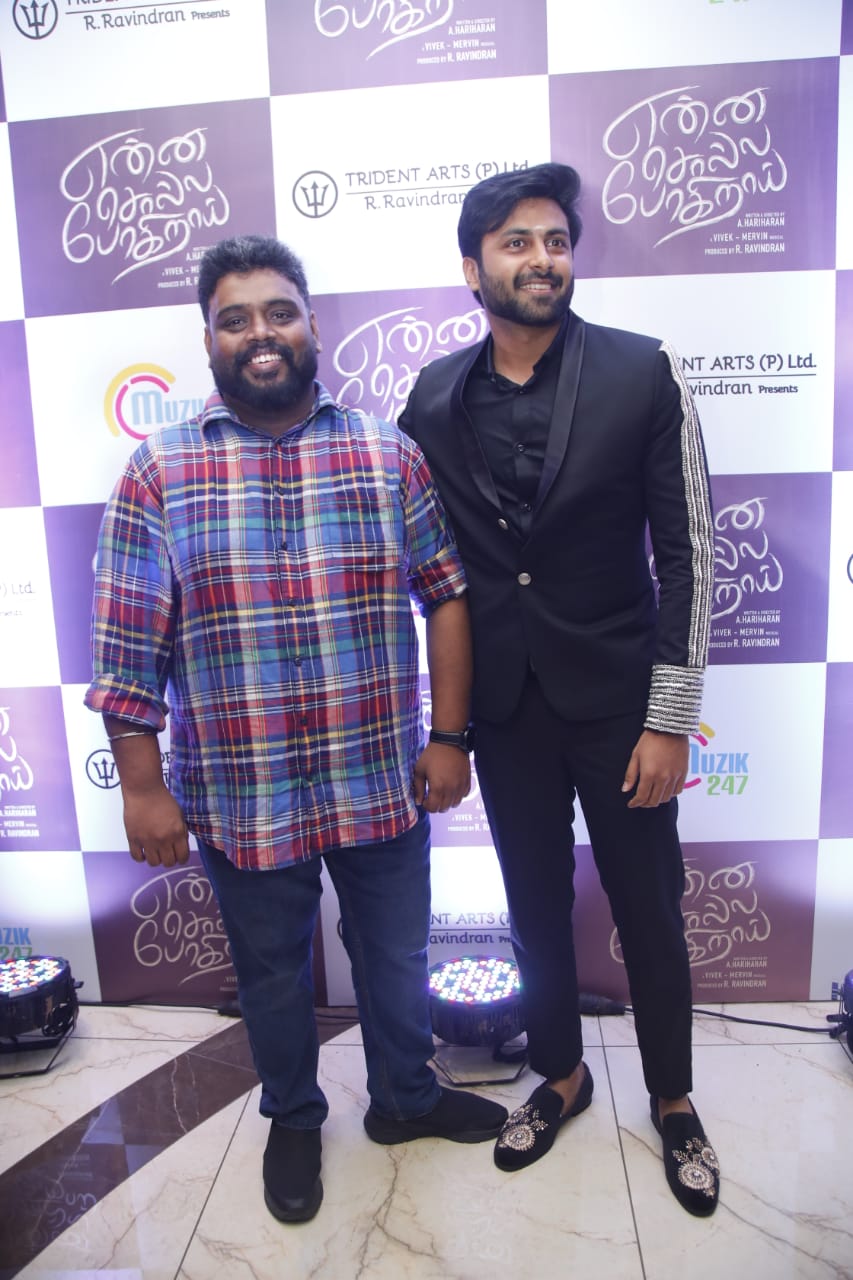 I thank God and all my friends here. I am here because of Love, and the love you all gave me has made me stand here at this stature in front of you. This is the first audio launch of my film, and I can clearly understand the love you all have for me.. This is because, even I have been there in your place in many audio launches. I can clearly state that the unconditional love is what I am experiencing because I have been in your position many times. My life can be classified into before and After Enna Solla Pogirai. Vijay TV has given a breakthrough for me. I never imagined that a comedy show can work so much wonders for me. I wanted to give a good film for the love you all have for me. I am glad that it has happened with Enna Solla Pogirai. When you have a good friend in your life, you will be shine like a star. Ravindran sir is such a good soul. He serves a wholesome delicious food to anyone, who comes to his office, and I myself have experienced it. When he first narrated me a script, I was little taken back and told that I am not interested. Later, I regretted if I was too hard on such a big producer. However, I was very clear that I have to do a movie for the people’s love in such a way that they are not disappointed. Usually, while listening to a script, I would get sleepy if the script isn’t good. Before Enna Solla Pogirai happened, I had listened to 40 scripts and dozed off. It was only ESP that kept me so much active throughout the script narration process. Hariharan has done a remarkable piece of work with this film. Vivek-Mervin duo has delivered a decorous music for this film. Both the actresses were friendly an supportive throughout the shooting. The film’s output is very colourful and grander. Pugazh looks beautiful in this movie. I always admire two people – Superstar Rajinikanth sir and Silambarasan sir. Silambarasan sir personally called and wished me. I thank him for that beautiful gesture. Sivakarthikeyan is my huge inspiration. I have always considered him while taking each step in my career and decisions. I am now curiously waiting to celebrate the moments of receiving positive reviews and response from you all.”