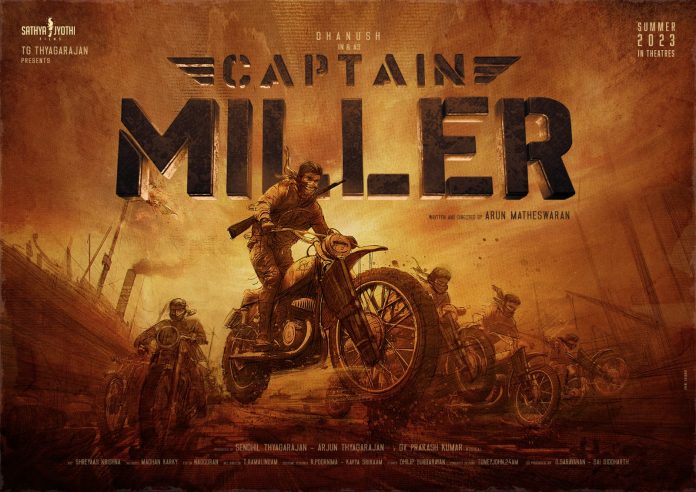 Sathya Jyothi Films has created an impeccable benchmark in the Tamil movie industry, by churning out the best timeless classics and commercial entertainers across the decades. Now, the well-esteemed production house has announced its new project titled ‘Captain Miller’ starring actor Dhanush in the lead role, directed by filmmaker Arun Matheswaran, far-famed for his critically acclaimed movies like Rocky and Saani Kaayidham. The movie made on a grand scale is a period film set against the backdrops of the 1930s-40s and will be released simultaneously in Tamil, Telugu, and Hindi.

Producer T.G. Thyagarajan, Sathya Jyothi Films, says, “I am elated to announce our prestigious project ‘Captain Miller’, which I strongly believe will be one among the promising movies made at a grand scale from our production house. Working with iconic actor Dhanush has always been a great pleasure as our previous collaborations have been successful. When director Arun Matheswaran narrated the script to me and Dhanush, both of us were excited, and wanted to materialize in a grand scale. I have always admired the director Arun’s unconventional thinking and maverick filmmaking methodologies to deliver exceptional movies are extraordinary. When he narrated the script, I was immensely impressed with his idea, and his engrossing screenwriting. It’s great to have music director GV Prakash, whose Midas touch will escalate the stature of this movie. Every single actor and technician in this movie has already carved a niche of excellence, and their contribution is going to elevate ‘Captain Miller’ to a greater magnitude.”

“Captain Miller” had created a huge buzz even before its official announcement, and Sathya Jyothi Films is nurturing this project with scrutinizing efforts to deliver it as a phenomenal cinematic experience for the audiences. To ensure that the project shapes up at its best, the team has undergone one year of the extensive pre-production phase. The star cast is going to be yet another attraction to this project, which will be fresh and appealing. In fact, the cast and crew of this movie have been finalized based on their respective potentials and remarkable achievements, rather than bringing together a team for the banner value. The official announcement on the actors getting on board will be revealed shortly.

Madhan Karky is penning dialogues for this movie. It is noteworthy that his outstanding dialogues for the greatest blockbusters like Baahubali franchise, RRR, and Pushpa is going to be an additional attraction for Captain Miller. The other technicians include Shreyaas Krishna (DOP), Nagooran (Editor), T. Ramalingam (Art), Poornima Ramasamy & Kavya Sriraam (Costume Designing), Dhilip Subbarayan (Action), Tuney John 24am (Publicity Designing).