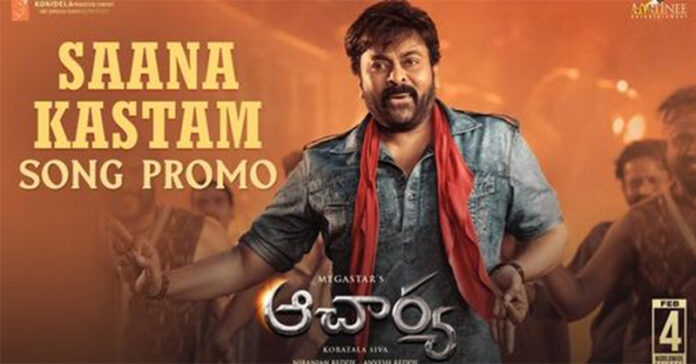 Regina Cassandra and Chiranjeevi will jive together in ‘Saana Kashtam’, the lyrical song which is to be released on Monday.

Meanwhile, the makers have unveiled the promo, which hints at the ostentatious sets and glitzy vibes.

As the promo starts, the focus is shifted towards actress Regina Cassandra, who is all dolled up to allure the viewers with her dance moves. Her attire has upped the glamour quotient, as the darker shades of her dress bring in the festive mood.

Chiranjeevi, as usual, maintains the grace, with his signature steps. His dressing is vibrant, with a good choice of colours.

The lyrical song seems to be a peppy number, which would go along with high-spirited tunes by Mani Sharma.

‘Acharya’ is helmed by Koratala Siva of ‘Srimanthudu’ and ‘Mirchi’ fame. Ram Charan and Chiranjeevi share the screen space in this upcoming commercial entertainer for the first time ever.

Bankrolled by Matinee Entertainment, high-budgeted ‘Acharya’ is all set for theatrical release on February 4.