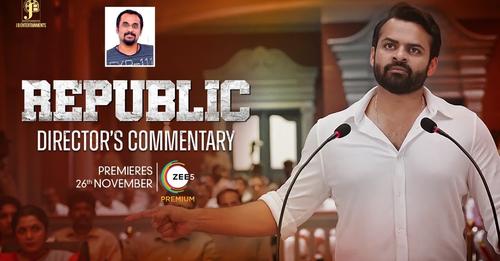 ‘Republic’ to stream on ZEE5 from November 26

First time in history of Indian cinema, director’s commentary to stream along with REPUBLIC movie

Hyderabad, 22 November, 2021: ZEE5 has been one streaming platform working constantly to offer new entertainment to its patrons. The popular streaming platform has now heralded a novel idea for the first time in the history of Indian cinema. The OTT streaming of the Telugu film ‘Republic’ will arrive with an incisive commentary by director Deva Katta. ZEE5 is the first OTT platform in the country to do such a thing, while ‘Republic’ is the first film to be coming out with such a commentary.

ZEE5 is the one platform that brings out a variety of entertainment formats: web series, direct-to-digital releases, original movies, digital releases. It has been dishing out content for the entertainment of worldwide viewership in various languages: from Hindi to Telugu, Tamil, Kannada, Malayalam, Marathi, Bengali to Gujarati. ZEE5 is just a click away on a mobile, tablet, desktop, laptop — be it in a lockdown or otherwise. From last year’s ‘Amrutha Ramam’, ’47 Days’ and ‘Meka Suri’ to this year’s ‘Battala Ramaswamy Biopic, ‘NET’ and the most recent ‘Alanti Sitralu’, ZEE5 has given us a number of direct-to-digital releases. ‘Raja Raja Chora’ was released for Dasara, while ‘Sridevi Soda Center’ was released for Diwali on ZEE5. Recently, the original web series ‘Oka Chinna Family Story’ was out, while ‘Heads And Tales’ was another recent release on ZEE5. On November 26, ‘Republic’ will start streaming.

‘Republic’ stars Sai Tej as the hero. Directed by Deva Katta, it is produced jointly by JB Entertainments and Zee Studios. The film explores the role of government officials, the political executive, and the people in a democratic system. Besides film critics, ‘Republic’ was described as inspiring by the common audience and film personalities. The film will now be streamed on ZEE5 from November 26 with Deva Katta’s commentary.

Usually, the audience watch a movie and the scenes in a film are critiqued by reviewers. How about the director of the movie himself explaining his point of view and how he conceived a particular scene? ZEE5 and director Deva Katta have come out with the commentary keeping this in mind. Deva Katta explains his screenplay in a freewheeling conversation with Editor Praveen KL, screenplay-writer Kiran and Creative Producer Satish BKR. They talk about the visual timeline of ‘Republic’ in a detailed manner. When the film starts streaming, the audience can choose the option to watch the movie along with the director’s insightful commentary. They can alternatively watch the movie without the commentary.