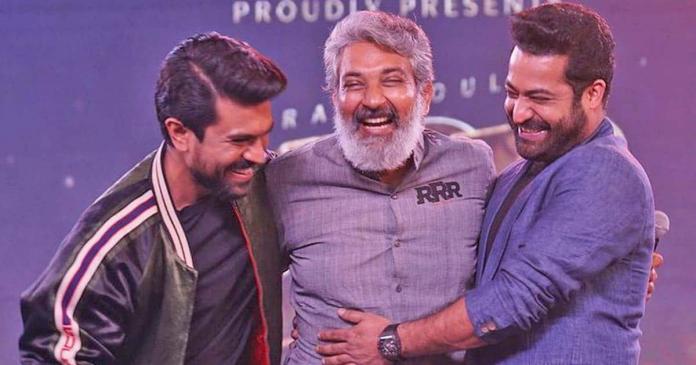 Rajamouli is all praise for Charan & NTR

After missing its theatrical release multiple times due to the pandemic, SS Rajamouli’s magnum opus ‘RRR’ is finally hitting the screens on March 25th. Starring Mega power star Ram Charan and Young Tiger Jr NTR in the lead roles, the much-awaited periodic drama has caught the attention of the entire nation since its inception.

As a part of promotional activities, the Baahubali director has prepared some speeches, which are now released by the makers. In one of the speeches, Rajamouli shared his experience working with the two finest actors of Tollywood.

“Charan is a fantastic actor, and he doesn’t know that. NTR too is a fantastic actor, and he knows that,” the Magadheera director said. He revealed that after completing a fantastic shot with Charan, he got tears looking at the performance of the Mega actor on the monitor. “When he is coming towards me, I go up and hug him. When I say, it is great, he asks me if I liked the shot? That is the kind of person Charan is.” Explaining about Tarak, he said that the Nandamuri actor did a fantastic job. “Before I say that the shot is fantastic, Tarak himself appreciates the shot. That is the confidence of Tarak. I have two amazing actors and I had an opportunity to work with them together. I made them work hard to get the desired output,” said Rajamouli.

The director further said that they took Tarak to the jungles of Bulgaria to cane the introduction sequence. He revealed that NTR ran in the jungle with no footwear and he ran like a tiger. “For Charan’s opening sequence, there were 2000 people, and the actor was pushed into the middle of the crowd. He worked hard for the shot. It is one of the best sequences in my career,” added Rajamouli. He also disclosed that they shot the interval episode for 65 days with 1200 people in December. However, they are not sure about the efforts they kept for the climax.