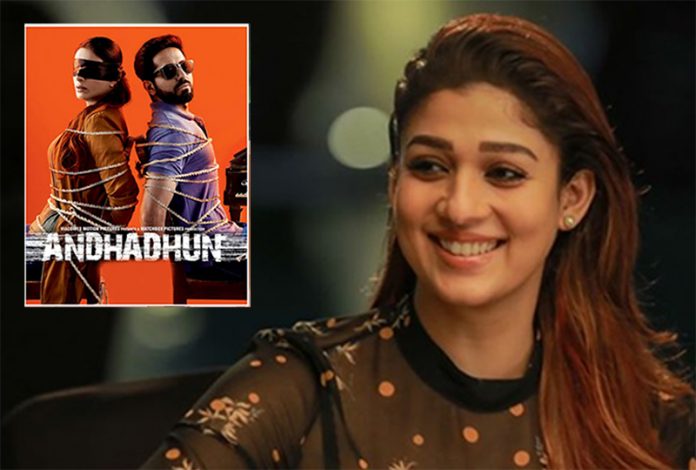 Nayanthara To Play Tabu’s Character In Telugu Remake Of Andhadhun?

The rumours about an interesting and buzzy film are a routine in film Industry and most of them end up being speculations with no real solid base to support them. Nithiin’s ‘Andhadhun’ remake seems to be attracting similar kind of attention from industry gossipmongers, as there is a new update every other day.

Now, the latest gossip about the film is that Nayanthara’s name is being considered by Merlapaka Gandhi, the director of the Telugu version, and the production team. After approaching Tabu, Ramyakrishnan and another actresses, the team has decided to ask Nayanthara to do the part, say sources.

They claim that the film budget won’t be the same as the producers initially thought it should be and they have to revise it and bring in enough star attraction to compel people for watching it in theaters. Hence, they have decided to go for such an unusual choice, say sources.

But Nayanthara proved to be a good actress but did not try as varied roles as Tabu to blindly accept her in this one. She has a huge following as current “Lady Superstar” and such negative roles may not suit her image too.

All said and done, if she is really interested in taking up such an opportunity and if producers have thought about it, then the movie will be definitely more interesting for even people who have watched the original to see Nayanthara in such baddie role, for the first time.