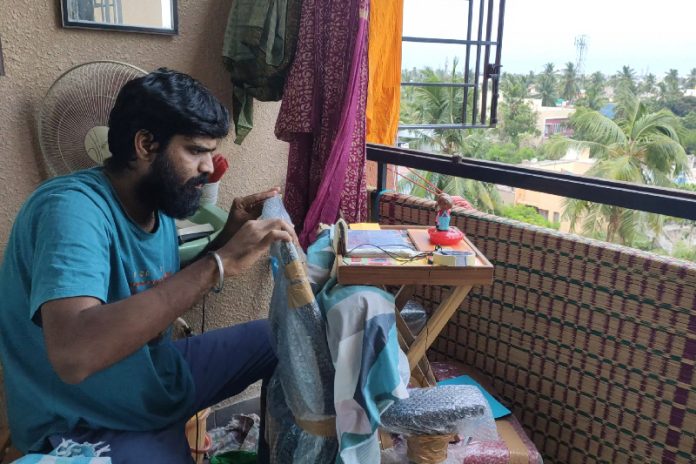 The unexpected pandemic turmoil during last year had rigidly forced many to stick to solitude. For a few, it allowed many to experiment with innovative ideas. Cinematographer Demel Xavier Edwards, a former associate of Ravi K Chandran has been one among them. He has created a song featuring just two small dolls, which has become the cynosure of cyberspace that has propelled the urge for ambitious curiosities among the aspiring cameramen to come up with the same.

Demel says, “I was supposed to fly Malaysia during last March for a film project, but eventually had to stay back as Lockdown was announced all over the world. Later, I was tested COVID-19 positive and had to stay in medical camp followed by isolation in my place. What became more excruciating was the ‘Solitude’, where being confined to walls left me restless. I wanted to do something with the resources I had, and that was when two small dolls inside the showcase stole my attention. I ideated a concept of love, separation, and joy. I tried shooting them with my wife’s mobile phone. I wasn’t sure if it would achieve a good visual resolution but later found the magic was happening that propelled me to proceed ahead. I managed to create some effects of snow, fire, and rain as backdrops. Every night, I would discuss with my creative producer Deepban M, Colorist Nandha, and editor PK for next-day plans. Finally, after getting the visuals shot, I approached Santhosh Dhayanidhi for the tune. I was surprised to see him render a beautiful composing within 24 hours and now to see the appreciations from my mentor Ravi Chandran and my colleagues in the industry – Vijay Milton, Dinesh Krishnan, and GK Vishnu elate me to the core.”

Music Director Santhosh Dhayanidhi says, “Last year was indeed a pretty big challenge for everyone, especially the ones in the creative field. Expressing creativity with the least sources available amidst several constraints became the only solace for such a league of people. The creative concept of Demel Xavier Edwards impressed me vividly. But what excited me was his ability to prove that when someone is bound to creativity, nothing can hamper them from showcasing it to the world. The visuals were amazing, and evoking emotions through the presence of just two small dolls is something beyond ordinary perceptions. Such aspects pushed me to give some music that will do complete justice to his sincere hard work. And now to see the heart-warming reception excites and enlightens me at the same time that ‘Creativity and Firm Focus’ are more than enough to push you ahead through any challenges.”

Ready to unmask the mystery, S.J. Suryah will put the rumours to rest in Prime Video’s latest Tamil original- ‘Vadhandhi – The Fable of...