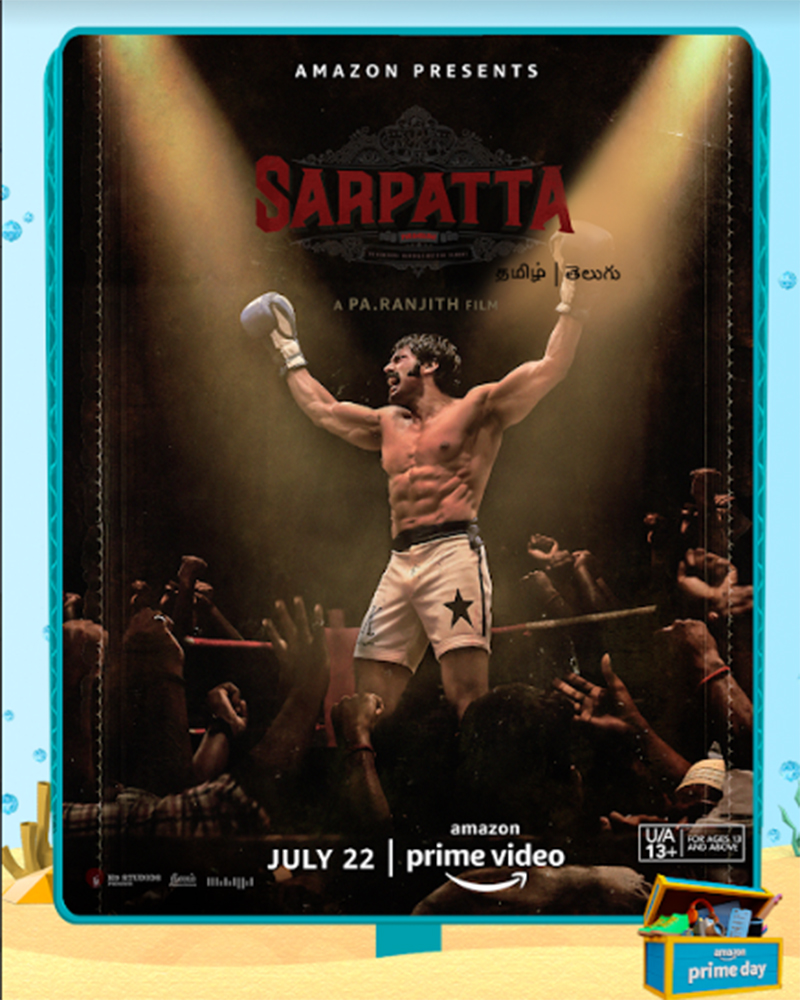 AMAZON PRIME VIDEO TAKES YOU BACK IN THE 70’s TO WITNESS AN EPIC BOXING DUEL BETWEEN TWO CLASHING CLANS WITH ITS UPCOMING SPORTS DRAMA – SARPATTA PARAMBARAI!

The Period Sports Drama set in the 70’s and headlined by Arya will stream exclusively on Amazon Prime Video Starting July 22nd, 2021

Chennai, India, 13thJuly 2021: Get ready to witness the golden era of the 70s and ride with the punches as Amazon Prime Video today unveils a sneak peek into the world of Sarpatta Parambarai! All set to premiere for the global audiences on 22nd July 2021, Sarpatta Parambarai will be available for its viewers in Tamil and Telugu across 240+ countries and territories. With the versatile and accomplished actor  Arya in the lead, the film is directed by critically-acclaimed directorPa.Ranjithand produced by Neelam Productions & K9 Studios. The film features an ensemble cast including Dushara Vijayan, John Kokken, Kalaiyarasan,Pasupathy, John Vijay and Santosh Prathap in pivotal roles.

Set in the 70s, Sarpatta Parambarai is not just a regular sports movie about boxing. It also showcases the culture, and lives of the boxing clans that existed in the North Madras. At the centre of the story lies two rival clans – Sarpatta and Idiyappa, who are constantly locking horns in a duel for the pride of their respective clans. The film, with a backdrop of sports, illustrates the nuances of an era that was rife with cultural and societal changes.

Talking about the film, actor Aryashared, “I have gone through a major physical transformation for this film and done a rigorous amount of training to get the physicality of techniques of a boxer right. It is a completely different role for me from my previous movies and I believe it is going to be a career defining film for me. Just like the sport, Sarpatta Parambarai promises to deliver a thrilling experience with action sequences and a storyline that will keep you on the edge of your seats, the trailer of the film will give you a brief sneak peek on what is about to come on the 22nd July. I am glad that this film will be accessible to people across the globe through Amazon Prime Video.”

Vijay Subramaniam, Director and Head, Content, Amazon Prime Video, India said“We make a continuous effort in understanding the pulse of our customers and provide them with a wide variety of content. We are extremely glad to have become a service where stories that are deep rooted in culture and cinematic marvels get a global voice. Sarpatta Parambai is one story that was waiting to be told, its universal theme of passion, grit and the quest for identity will resonate well with our audiences in India and all over the world. We are excited and thrilled to add this new spectacular film to the vast library of phenomenal stories that Amazon Prime Video has to offer.”

“Sarpatta Parambarai is a period sports drama that reflects the raw passion and enthusiasm for boxing which wasn’t just a sport back then but also a sort of culture & tradition that demanded repute and respect. With this film, I want to tell the audience that there’s so much more to Madras that they are not aware of. Sarpatta Parambarai will take them through the culture and life of these clans and their stories. I am glad we found a great service to partner which will showcase our film across 240 countries and territories. I hope viewers will appreciate our work and the story of Sarpatta Parambarai.” said Director, Pa. Ranjith.