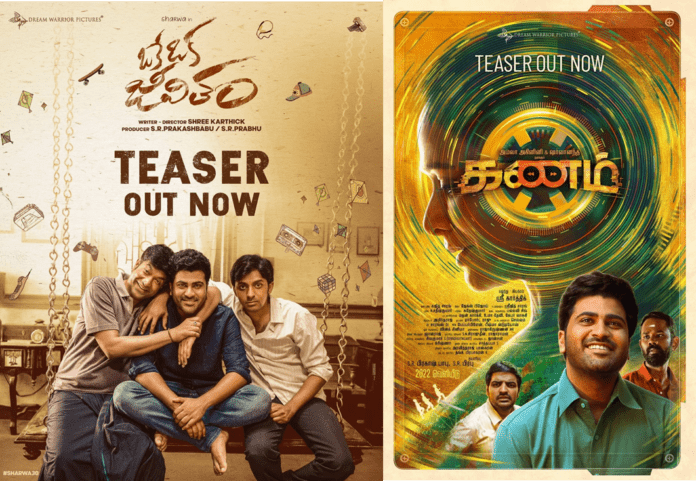 Out of the box stories never fail to impress fans. Dream Warrior Pictures is a company that has always entertained fans with such stories. The company’s next release is ‘Oke Oka Jeevitham’.

Actor Suriya has release the teaser of the film in his Twitter page. It has attracted a lot of attention in social media. . Various film personalities have been congratulating the film crew.

Directed by debutant director Shree karthik, the film stars Amala Akkineni, Sharwanand, Nasser, Ritu Verma, Satish, Ramesh Tilak and MS Bhaskar among others. Sujith Sarang is the cinematographer, Jakes Bejoy is the composer, Sreejith Sarang is the editor and Satheesh Kumar is the art director.

About the teaser release of the film, director Shree karthik said, ” ‘Oke Oka Jeevitham’ is a beautiful sci-fi film centered on a mother’s affection. I have directed it in both Tamil and Telugu.Venenla kishore and Priyadarshi have acted in important roles in the telugu version whereas Sathish and Ramesh Thilak has acted in Tamil version. Though started as a small budget film, it is now a science fiction, bilingual film with a substantial budget involved.

Ex dream girl of South Indian cinema, Madam Amala, has played the mother’s role in this movie. . I wrote this story with her in my mind. She has not acted for 25 years but agreed to after hearing this story. The most important characters in the story are played by three boys, Hitesh, Jai and Nithya.

The final stages of work of the film are in full swing. Since it is a sci fi movie, we have taken utmost care and efforts for the vfx scenes. One can know the whole just by a handful, likewise this teaser is a short preview of what’s like in a movie. Many more amazing things will be out soon. We will soon be releasing a mother song featured in this film. The mesmerizing voice of Sid Sriram in that song will definitely linger in your mind. This song will take the prominent place in the list of songs about mother in Tamil cinema. ”

Oke Oka Jeevitham will be release as Kanam in Tamil. The film be a grand tamil-telugu release of 2022.