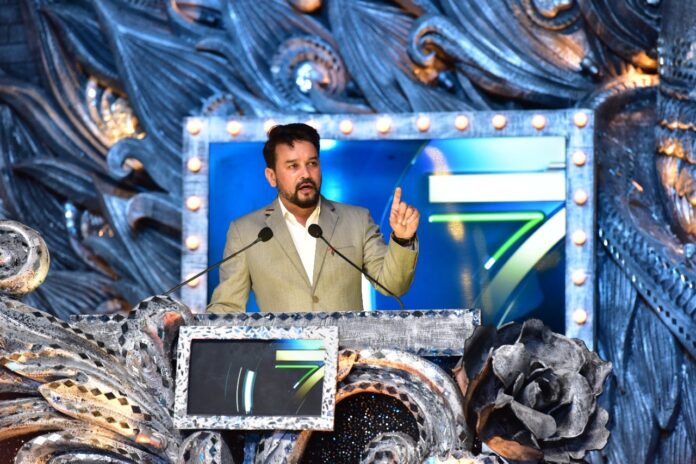 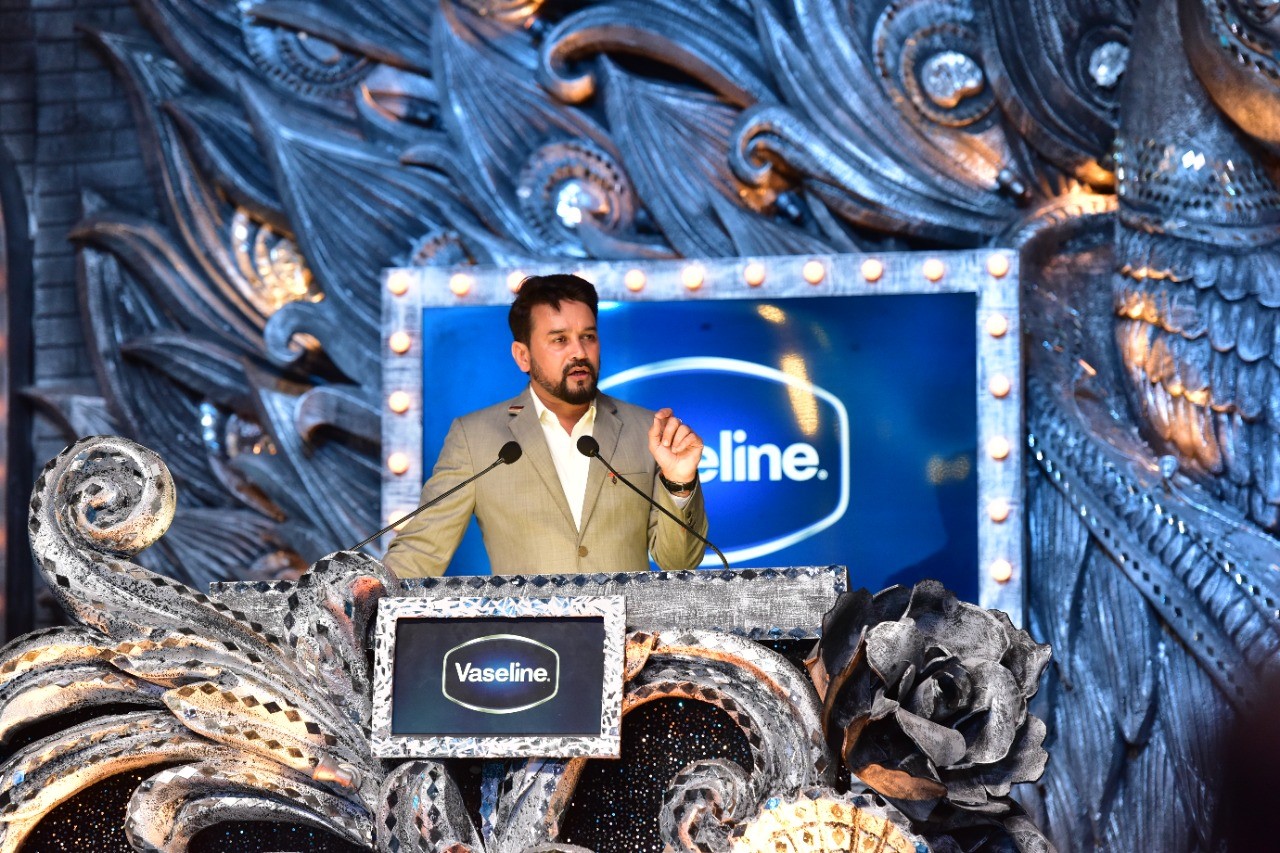 As the 52nd edition of the International Film Festival of India comes to a close, the Union Information and Broadcasting Minister Shri Anurag Singh Thakur has reiterated the Government of India’s commitment to the promotion and cultivation of the finest forms of creative expression through the powerful medium of cinema.

Addressing the closing ceremony of the festival at Dr. Shyama Prasad Mukherjee Indoor Stadium, in Goa today, November 28, 2021, the Union Minister expressed his heartfelt appreciation and abiding admiration for the spirit underlying the free-spirited creation and unrestrained enjoyment of good cinema, to which the festival pays a tribute, in ever better ways with each passing year.

The Minister told film lovers that the 52nd IFFI is spearheading us to new beginnings. “We have come together to celebrate our rich tradition of filmmaking and the art of storytelling through cinema. We have captivated audiences and recognized young talent, being in the midst of icons and legends of cinema.”

Terming the 52nd IFFI as a festival of many firsts, the Minister said that IFFI has been keeping up with the winds of change. “For the first time at this IFFI, we had the presence and enthusiastic participation of OTT platforms. IFFI has embraced new technologies, platform choices of audiences and has kept pace with changing times. We have also showcased best films from BRICS nations and we hope that this partnership blossoms further.” The Minister recalled the first-of-its-kind initiative “75 Creative Minds of Tomorrow”, wherein 75 budding artists have been hosted at IFFI and given a rare opportunity to present their talents at the international platform, as part of the national celebration of Azadi Ka Amrit Mahotsav. “In a unique initiative aimed at identifying and nurturing young talent, we selected 75 Creative Minds of Tomorrow. I am confident that some of them will come back after a few years not just as a part of the film industry but also as icons of cinema. The kind of encouragement they got – the master classes by the who-is-who of cinema industry, they are one of the lucky few to have got this opportunity.” The 75 youngsters comprising 7 female and 68 male artists, all below 35 years of age, have been chosen based on their exquisite skills in different fields of film making including direction, editing, singing and screenplay, among others. The youngest among them is all of 16 years old, Aryan Kumar from Bihar, chosen for his skills in Film Direction.

The I&B Minister informed that IFFI has been getting bigger year by year. “At this IFFI, around 10,000 delegates from across the world, including filmmakers, students and cine enthusiasts participated in a hybrid format. There were 234 screenings in which nearly 450 hours of movies were screened. Total hours watched online comes to a whopping 30,000 plus hours.”

The I&B Minister highlighted  that this year’s IFFI presented a unique experience for the film enthusiasts with a diverse catalogue of more than 148 foreign films drawn from 73 countries. This festival witnessed 12 world premieres, 7 international premieres, 24 Asia premiers and 74 India premieres. 75 Indian films were screened, 17 of them specially selected under India @75 Section. 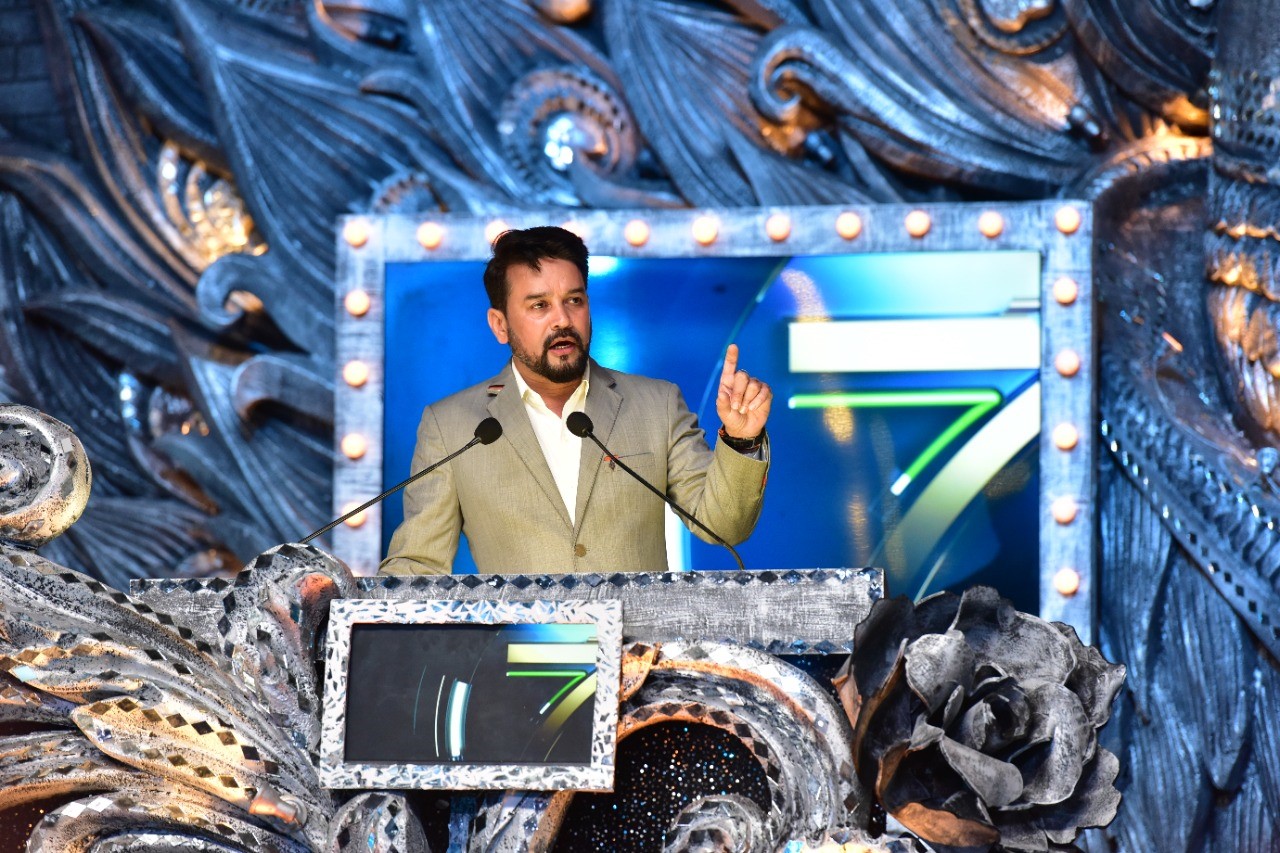 The Minister informed that the legends and greats of Indian and world cinema were honoured at this edition of IFFI. “We honoured Hungarian filmmaker Istevan Szabo and Hollywood filmmaker Martin Scorsese, both legends of international cinema, who received coveted Satyajit Ray Lifetime Achievement Award. We honoured icons of Indian cinema, Prasoon Joshi and Hema Malini, with Indian Film Personality of the Year Award. IFFI 52 also paid homage to several greats of Indian and international cinema. A special tribute was also dedicated to the original bond Sir Sean Connery,”

For the first time in the history of IFFI, all major OTT platforms such as Netflix, Amazon, Sony and others, participated in the film festival through exclusive Masterclasses, content launches and previews, curated film package screenings, and various other on-ground and virtual events. The participation of OTT platforms will become a regular feature in future. Preceding the announcement of the Golden Peacock and other festival awards, I&B Minister extended his heartiest wishes to all contenders, also congratulating all films and filmmakers who have been honoured at the festival. “Their work and contribution will inspire generations to come to aim high and become masters in the field.”

The Minister thanked international delegates for travelling across the world for more than 20 or 30 hours even amidst the COVID-19 pandemic, to attend IFFI. He invited the global community to come and shoot films in India. “Please come and shoot films in India. Film Facilitation Office will facilitate you with all help you need, from one state to another.” Speaking about the upcoming film city in Uttar Pradesh, the Minister said that the state is coming up with a 1000-acre film city. “They are just waiting for the right people to come and invest in.”

The Minister appreciated Aimee Baruah, Director and Actor of the first-ever IFFI Indian Panorama Film in Dimasa Language, Semkhor. “Aimee Baruah had to stay for one year in the place occupied by the tribal community of Assam, in order to learn the Dimasa language, she had to brave various odds such as having to complete shooting early in the morning, in order to make the film, I appreciate Baruah for this.” 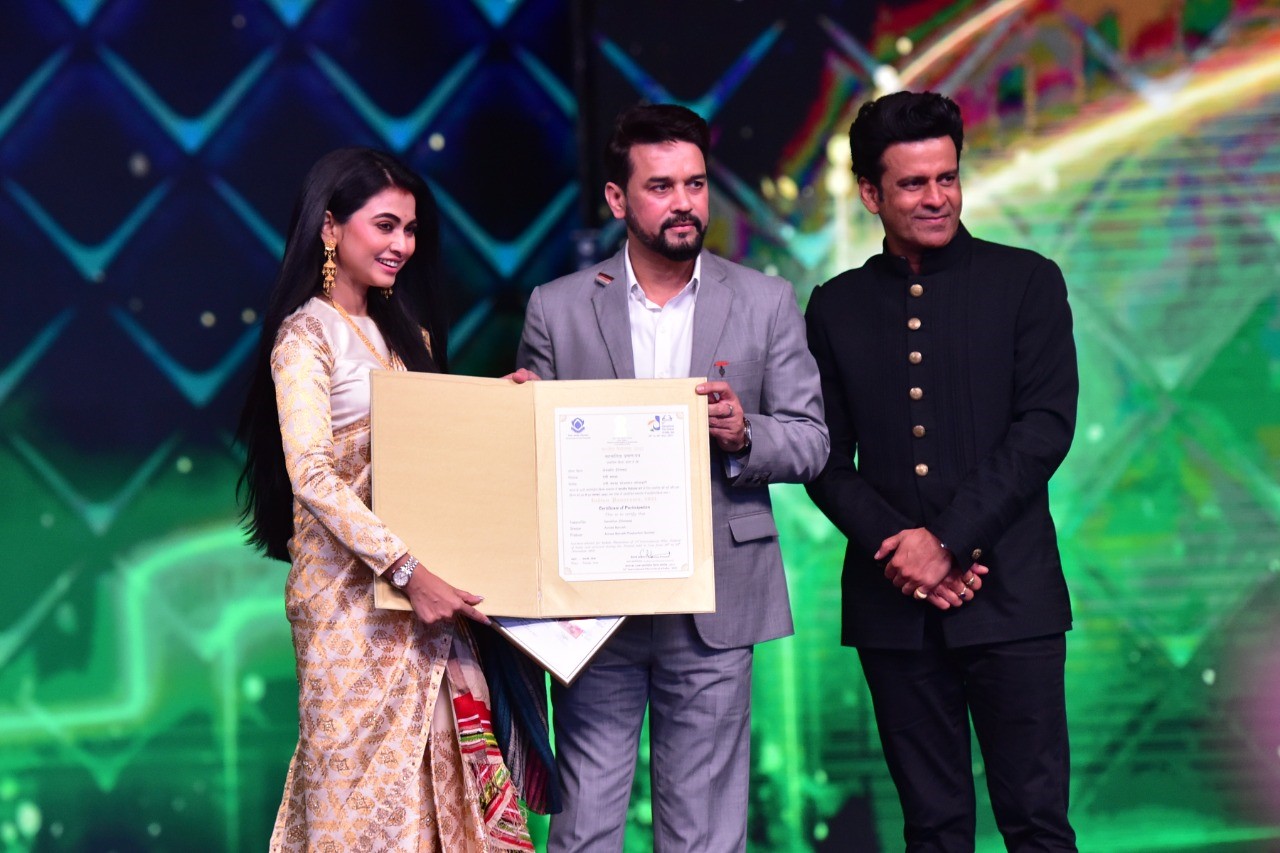 The Minister recalled that Prime Minister Shri Narendra Modi has announced that as part of Azadi ka Amrit Mahotsav, the government will celebrate the birthday of tribal freedom fighter Birsa Munda as Janjatiya Gaurav Divas. “The Government of India has celebrated November 15 – November 22, 2021 as Janjatiya Gaurav Saptah. It is great that we get a film on the tribal community in this month itself.” I commend you for this”, the Minister told, addressing Aimee Baruah.

The Minister expressed his resolve to strengthen NFDC. “Through this, you will get opportunity to make even such films which are doubtful of giving a financial return, we will work together to showcase India’s culture and tradition across the world.”

The Minister appreciated the film fraternity for taking India’s cinema and the Hindi language to various corners of the world and that the government will support the industry in this.

The Minister appreciated Prasoon Joshi, who has been presented the Indian Film Personality of the Year Award for 2021. “Prasoon Joshi is not one with one talent, but a plethora of diverse talents. I am happy that Shri Joshi, along with actor Hema Malini, is being conferred the Award during the occasion of India’s 75th year of Independence.” 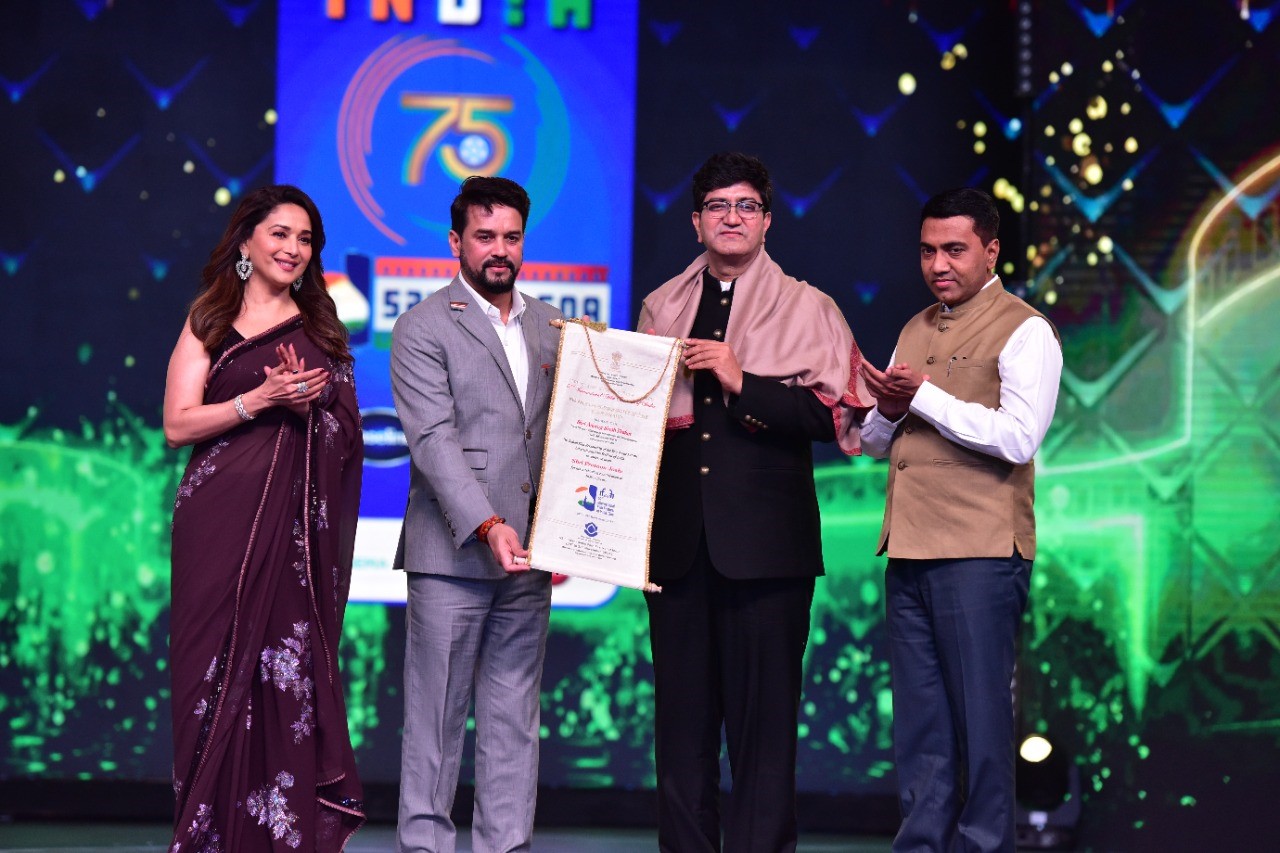 The Minister promised everyone that IFFI will be held next year at the same time and place as that of this edition, i.e., during November 20 – 28, 2022 in Goa.

The Minister concluded his remarks, extending his best wishes to all current and aspiring filmmakers and ensuring the Government’s wholehearted support – at the level of both policy design, evolution and implementation – in order to do all that is necessary to strengthen and the entire ecosystem and facilitate the industry to scale new peaks of excellence.