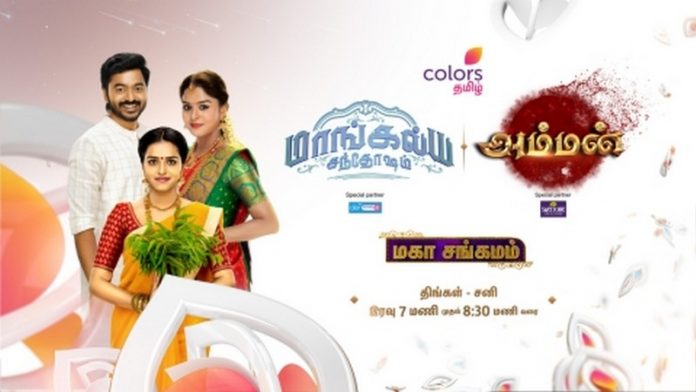 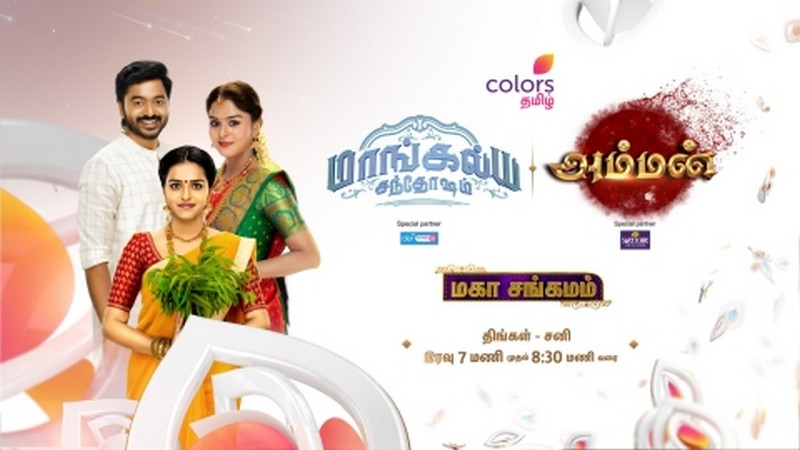 Chennai 18thMarch, 2021:Colors Tamil in continuing efforts to entertain the audiences, is set to bring together its acclaimed shows – MangalyaSandhosam and Amman for a Mahasangamam episode for the next two weeks. The Mahasangamam episodes will witness an engaging storyline of two protagonists — Nithya (played by Lakshmipriya) and Sakthi (played by PavithraGowda), who venture to find solutions for their problems. Starting from 15th March the Mahasangamam episodes will also feature the ever-charming RachithaMahalakshmi playing a cameo role as Amman, each of the days till 27th March, at 7:00 PM.

The Mahasangamam episodes is a blend of two different tales, where destiny favors two lead characters– Nithya and Sakthi to meet at a temple that is busy preparing for the Agni Amman festival after three decades. In the temple, Sakthi and Nithya will be seen competing against a group of women to get chosen to pull out the Amman statue from the pond. Meanwhile, Easwar (played by Amaljith), Samarasam, and Ranjith along with Sakthi’s dad – Deva (played by choreographer Tarun) all find themselves at the same time thanks to various circumstances. What lies ahead of Nithya and Sakthi? Will there be more hurdles on their journey?

Commenting on Mahasangamam, Mr.AnupChandrasekharan, Business Head, Colors Tamil, said “We are delighted to bring to the viewers the Mahasangamam episodes of our popular fiction shows – Amman and MangalyaSandhosam, where our extremely talented cast will come together to showcase an intriguing storyline that is ensured to hold the viewers connected. The Mahasangamam episodes will have a unique narrative with lots of twist and turns and, we are certain that it will keep our audience engaged and enthralled.”

Commenting on her cameo, actor –Ms.RachithaMahalakshmi,“I have always enjoyed watching MangalyaSandhosam and Amman on Colors Tamil and, it was quite exciting to work with the cast and the crew of the two shows for their Mahasangamam special. It was an overwhelming experience for me to portray the role of Amman, which will bring an unconventional twist to the entire plot of the Mahasangamam episodes. It was overall a wonderful experience for me to play the character and, I hope viewers enjoy my cameo as much as I enjoyed filming for it.”