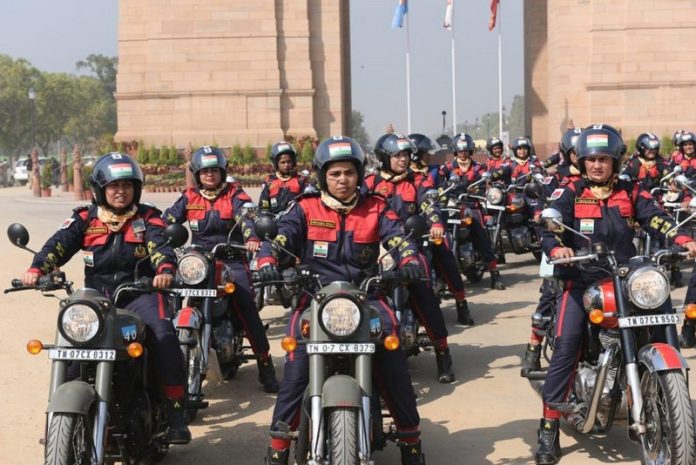 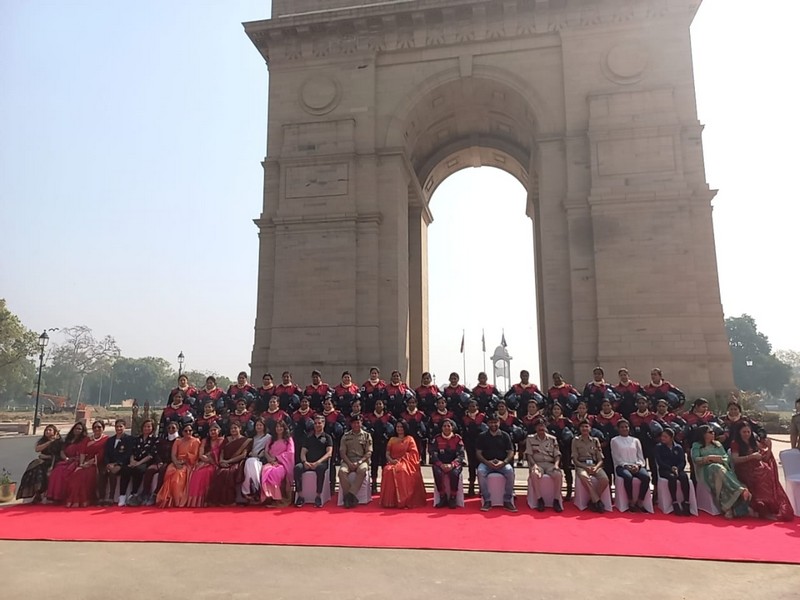 Tuesday, 08th March 2022: BSF Seema Bhawani Shaurya Expedition “Empowerment Ride – 2022”, an organizational mission for empowering women, was flagged off from India Gate, New Delhi today on 8th March 2022 at 1000 hrs by Mrs Nupur Singh, President, BSF Wives Welfare Association (BWWA). The BSF Seema Bhawani Shaurya Expedition “Empowerment Ride – 2022” celebrates women’s achievements and aims to forge positive visibility of women, so as to encourage young girls and women across the country in stepping up for taking on major roles in shaping the future of the nation as well as to join the ranks of BSF. 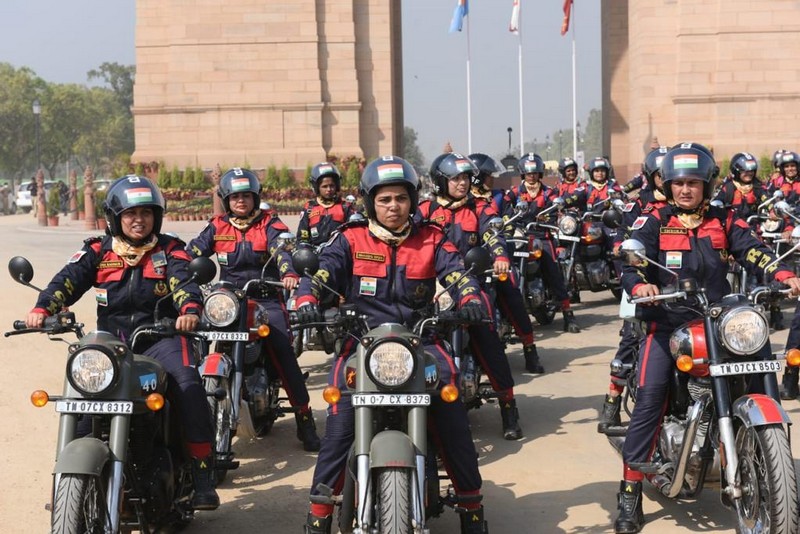 Organized in association with Royal Enfield, 36 members of BSF Seema Bhawani All-Women Daredevil Motorcycle Team led by Inspector Himanshu Sirohi embarked on a grueling 5280 km ride traversing through major cities all the way to Kanyakumari and onward to Chennai spreading the message of Women Empowerment across the nation. On this occasion, the Chief Guest highlighted the important role of women in the development of the country and appreciated the efforts of the force in the field of women empowerment. 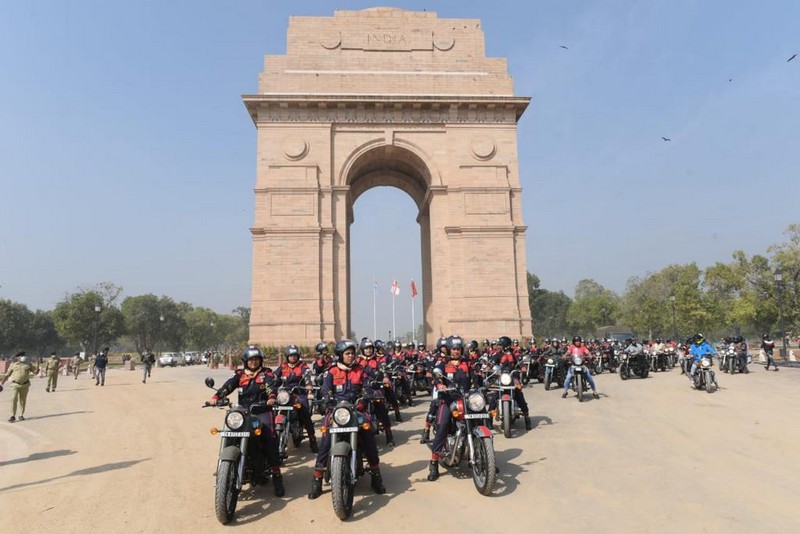 On the occasion, Mohit Dhar Jayal, Chief Brand Officer, Royal Enfield, spoke about Seema Bhawani Shaurya Expedition “Empowerment Ride- 2022” being an important addition to Royal Enfield’s distinguished record of service to the nation’s security forces. He expressed immense pride in the expedition being led by the all women Seema Bhawani team which has inspired millions with their incredible display of daredevilry and skill in the recent past and will further motivate and galvanize many more women during this incredible journey. He wished the team the best for the adventure that lies ahead for them over the course of the next 20 days. 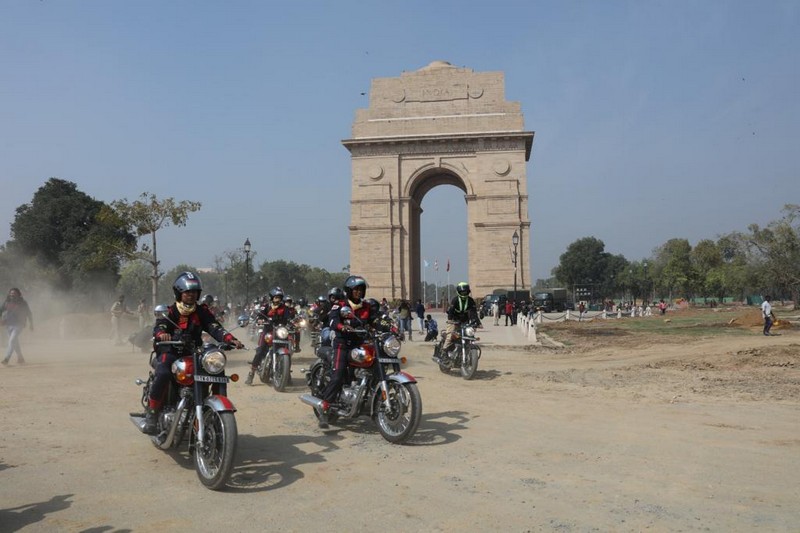 Prominent women Olympians, Sportswomen, Dronacharya and Arjuna Awardees present as Guests of Honour during the flag off ceremony were honoured by the Chief Guest Mrs Nupur Singh, President BWWA. They include:

BSF Seema Bhawani Shaurya Expedition “Empowerment Ride – 2022” will traverse the length and breadth of the country, covering historical landmarks beginning from India Gate in Delhi, leading to the Wagah Attari Border in Punjab and Statue of Unity in Gujarat before finally culminating at Royal Enfield’s India Technical Centre in Chennai, Tamil Nadu. Royal Enfield’s all new Classic 350 will be the companion of the valiant Seema Bhawani riders during this journey across the country. The motorcycle is inspired by the company’s rich legacy of building timeless classic motorcycles that meet modern aspirations and has been a trusted ally of the armed forces since time immemorial. The expedition will pass through Chandigarh, Amritsar, Attari, Bikaner, Jaipur, Udaipur, Gandhinagar, Kevadia, Nasik, Solapur, Hyderabad, Anantapur, Bangalore and Kanyakumari before reaching its final destination in Chennai on 28 Mar’ 2022. 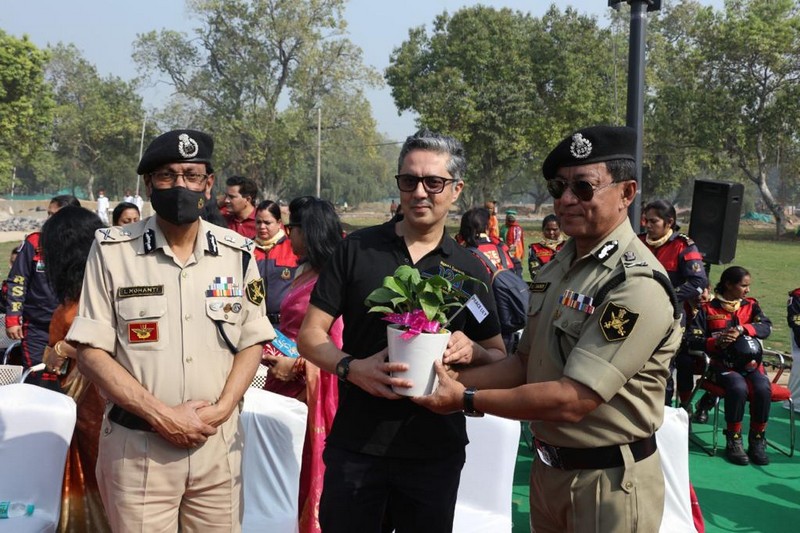 The team will also be interacting with school children, NCC volunteers and youth, various riding communities and audiences with an intent to sensitize and bring forth an awareness about the capabilities of women while emphasizing freedom from bias, stereotypes and discrimination. 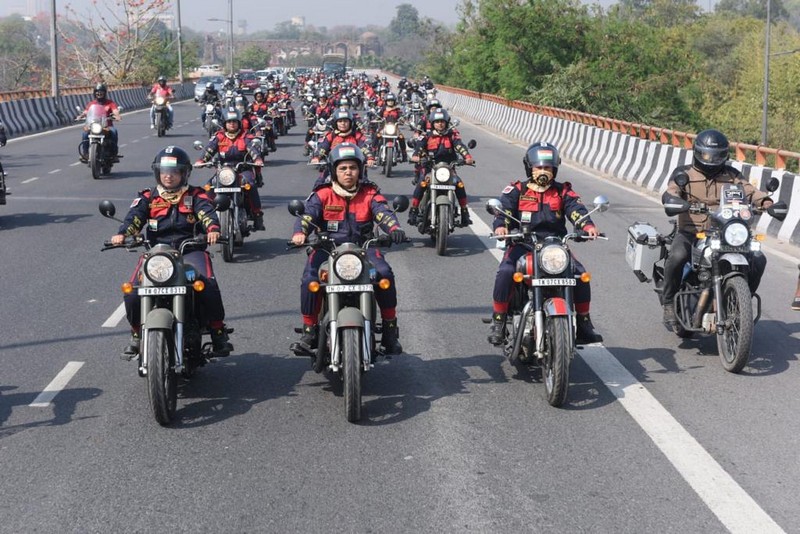