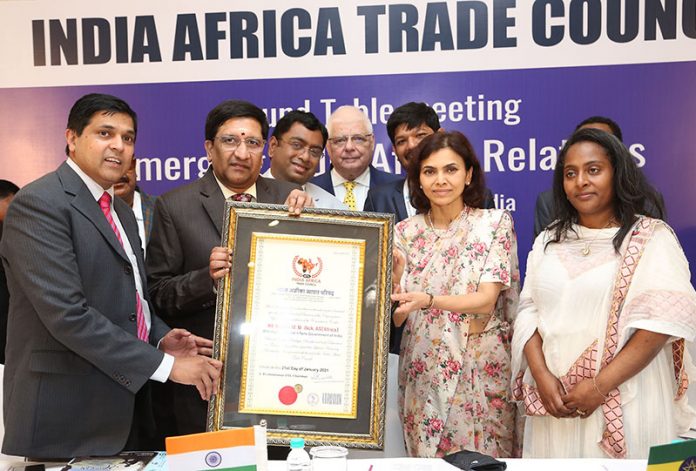 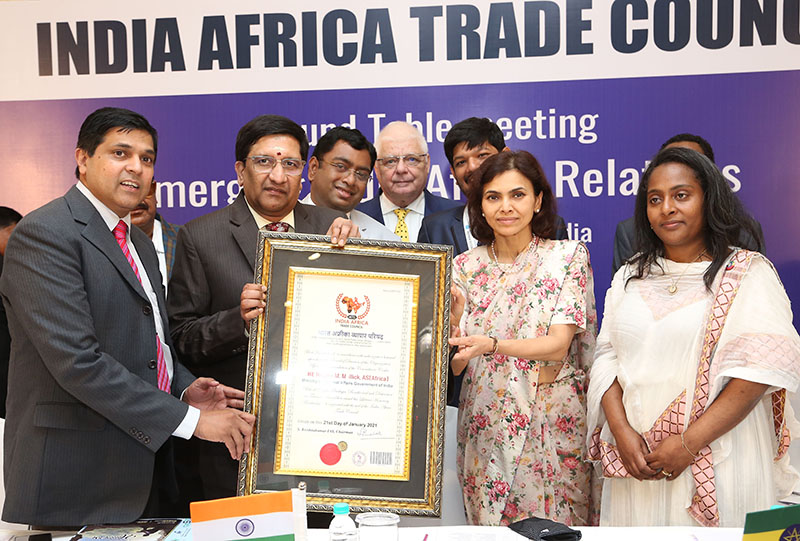 INDIA AFRICA TRADE COUNCIL was inaugurated in Hotel Crowne Plaza, Chennai for building up business relations between both the countries of India and African Region.

The India Africa Trade Council was inaugurated by the Additional Secretary(Africa) Ambassador Nagma Mallick(IFS) Ministry of External Affairs, Govt of India and the Ambassador of Ethiopia in India Her Excellency Dr. Tizita Mulugeta Yimam.  There is a huge interest in India as Africa is an emerging region having a great scope for multilateral business opportunities. India Africa Trade council will open 13 Trade offices in Major Metro cities of India to facilitate Indian Businessmen wanting to do Trade in African countries. These offices are expected to work directly with embassies in Delhi and bring opportunities to places like Hyderabad, Chennai, Bangalore and Hyderabad.

“Africa will be at the top of our priorities as per the Prime Minister’s Vision, through the council we will continue to intensify and deepen our engagement with Africa which will be sustained and regular.  Our development partnerships will be guided by Africa’s priorities. and we will build as much local capacity and create as many local opportunities as possible. We will bring the South Indian market closer and make it easier and more attractive to trade with Africa. We will support our Industries to collaborate with African companies” said the President of the Indian Economic Trade Organization (IETO) Dr. Asif Iqbal during the Inauguration.

“My goal is to build stronger multilateral relations and reach new heights between Tamilnadu companies and the African region which is a huge market and I will be focussing on the COMESA region that comprises 19 countries especially South and East Africa with a huge NRI population and we will explore the opportunities in a structured manner before the Africa Free Trade Zone is started” Said B. Ramakrishan, Founder of Corporate Clinic in Chennai who is appointed as the Director of the India Africa Trade Council.  Letter of Appointment was presented by the Additional Secretary(Africa) and the Ambassador of Ethiopia during the Reception Ceremony in Chennai.
There was also a round table meeting that has been organized by the council in chennai with participation from Indian companies doing business in Africa.

A 30-member delegation from South India of the India Africa Trade Council will visit COMESA region of Ethiopia, Djibouti, Zimbabwe, Botswana and Namibia in the month of April 2021 and various MOUs in Health sector, Skill development, Agriculture are expected to be signed with various companies and organizations in this region.

The following program are planned for the India Africa Trade Council:

Africa is keen to improve it’s multilateral relations with India especially in the area of capacity building with organizations like COMESA, ECOWAS, WAEMU, SADC and SAHEL.  Indian Govt extends Credit lines for african countries in areas of education, skill development, healthcare, agriculture and regular talks are held between Indian and African governments.

“Ethiopia’s relations with India date back several centuries and its relationship with India is directed by the historicity of their interactions – the century-old trade partnerships and socio-cultural linkages. We want to elevate our ties to the next level. We want to elevate our bilateral partnership; we can come to an agreement that we can elevate it to the level of strategic partnership. We want to have a dynamic and fruitful dialogue on bilateral and regional levels” said the Ethiopian Ambassador Dr. Tizita Mulugeta Yimam.