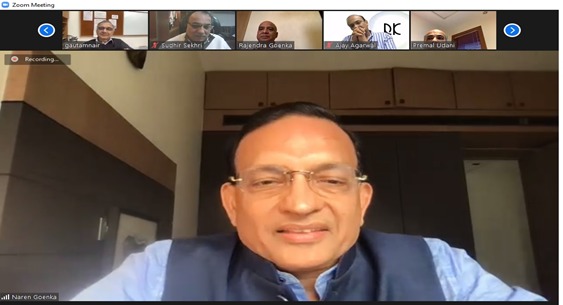 Narendra Goenka takes over as new Chairman of AEPC, Says apparel exports to pick up further speed in 2022

New Delhi,Shri Narendra Kumar Goenka, took charge of Apparel Export Promotion Council (AEPC) as its new Chairman. Padma Shri Dr A Sakthivel handed over the charge to him. Assuming charge of the Council at its Executive Committee meeting held today, Shri Goenka said, “We are witnessing a robust growth in apparel exports. Going by the export orders in hand, this positive trend will further accelerate in the last quarter”. He further said, “Apparel exports were 22% up at $1.46 billion in December 2021 from $1.20 billion in December 2020. The same in the first nine months of this fiscal stood at $11.13 billion, 35% more than $8.22 billion in April-December 2020. The trend is getting stronger.”

Goenka said that this major turnaround in apparel exports was possible due to the highly efficient management by the government led by the Hon’ble Prime Minister Narendra Modi and the entrepreneurial spirit of the Indian apparel exporters. Despite several disruptions in the global supply chain and demand, the Indian apparel industry demonstrated its resilience by gradually inching back to the pre pandemic growth path. By the end of this financial year, we will be looking at new targets, he said.

“With global demand picking up gradually and industry reporting handsome orders in hand, apparel exports are likely to pick up in 2022. We need to strongly focus on efforts for promoting Brand India taking suitable measures to ensure sustainability and other social compliances,” he added.

Shri Goenka has been associated with the Council for more than two decades. He was the Vice Chairman of the apex body of Indian apparel exporters before taking charge as Chairman, AEPC.

AEPC is the official body of apparel exporters in India, under the aegis of Ministry of Textiles, that provides invaluable assistance to Indian exporters as well as importers/international buyers.