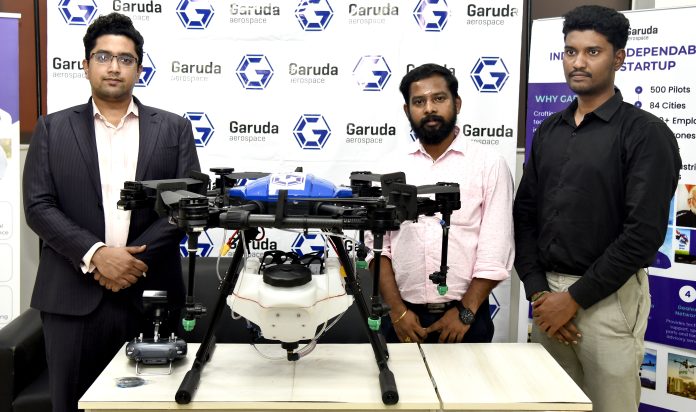 India’s leading drone manufacturer, Garuda Aerospace creates history by becoming India’s first drone startup to receive both Type Certification and RTPO approvals by DGCA for their indigenously designed Kisan Drones. DGCA Type certification is provided on the basis of the quality check of the drones and is issued after a rigorous testing process for the UAVs. The Type certification was introduced by the government of India in August 2021 under Drone Rules and the historic dual DGCA approval validates Garuda’s tag of being India’s most valuable Drone startup.
The Made in India Kisan drones are particularly developed for agricultural purposes such as reducing crop loss, crop health monitoring, yield measurement, and crop loss mitigation with the latest manufacturing capacities, and strong technology backgrounds. Having been awarded Type Certificate for the GA-AG model, Garuda Kisan Drone is now eligible for Rs.10 lakh unsecured loans from Agri Infrastructure Fund at a 5% interest and 50-100% subsidy from the Government of India. Priced at Rs.4.50 lakhs, Garuda Kisan Drone is India’s most affordable advanced automated Agri Drone which has DGCA-approved Type Certification in the under 25kg small category. ICAR, KVKs, FMTTI, Ministry of Agriculture and Farmer welfare, and several other Government Agriculture bodies will now have an option of procuring high-tech Made in India Drones manufactured by Garuda Aerospace. This will lead to creating job opportunities for the youth in the near future and a vision of training 1 lakh drone pilots in the next 2 years.
Agnishwar Jayaprakash, Founder and CEO, Garuda Aerospace, said, “The exclusive double certification by DGCA for Type and RPTO certification is a testament to our indigenous Made in India Drone manufacturing capacities. We are powered and blessed with strong demands of manufacturing 5000 drones in the next 5 months catering to many opportunities. With receiving approvals we are certain that the necessary utilization of skills with significant sector growth will be seen. Our drones will further benefit farmers and agri- entrepreneurs by playing a major role in impacting the farmers’ lives and building new-age careers for young Indians within the drone industry. “
“Ever since Prime Minister Narendra Modi flagged off 100 Kisan drones in 100 villages, our Kisan drones have empowered farmers and entrepreneurs. The certification will also help Garuda Aerospace create new job opportunities, and advanced pilot training for rural youth and also empower economic growth. Recently Union Minister Anurag Thakur flagged off the drone yatra and mentioned that India will require one lakh drone pilots by the next year. My goal for Garuda Aerospace is to impact 1 billion lives positively and not become the 1st ever-Indian Drone Unicorn Startup. Valuations will come when we create genuine value and I believe we will create an immense impact in several Multi-Billion Dollar sectors in the next 12-15 month’s time. With this Garuda Aerospace gets a chance to fulfill the objective of empowering farmers and creating employment. I’m extremely delighted to receive approvals from DGCA  on the auspicious occasion of Kisan Diwas which feels like a perfect culmination of all the hardwork and efforts made by using affordable drone technology for the farmers.” concluded Agnishwar Jayaprakash.
Garuda Aerospace recently commenced its $30 million Series A round at a $250 million valuation. Former Indian cricket team captain Mahendra Singh Dhoni has invested and is also the company’s Brand Ambassador. MS Dhoni has recently launched a drone named Droni. Garuda Aerospace boasts of a drone fleet of 400 drones and a well-trained team of over 500 pilots across 26 different cities. Garuda Aerospace has been termed India’s most valuable startup and expects to be India’s first drone Unicorn startup in the near future.
Garuda Aerospace CEO Agnishwar Jayaprakash along with Shyam Kumar – COO, Ramkumar – Vice President were present on the occasion.
About Garuda Aerospace
India’s Most Dependable Drone Start-up Garuda Aerospace is a human-centric brand that is focused on developing low-cost drone solutions to optimise industries through accurate data. Starting in 2015, The company has already made a significant mark on the drone industry with the Drone-As-A-Software aggregator. This aggregator designs impeccable drones for various human and industrial needs, offering various drone solutions to the industry. Garuda Aerospace has received national and international recognition for its success in the drone sector.