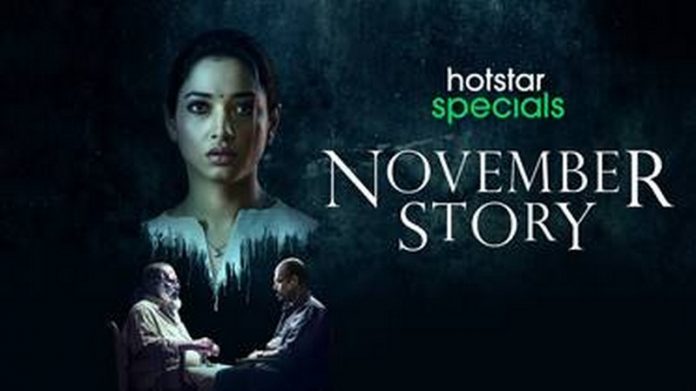 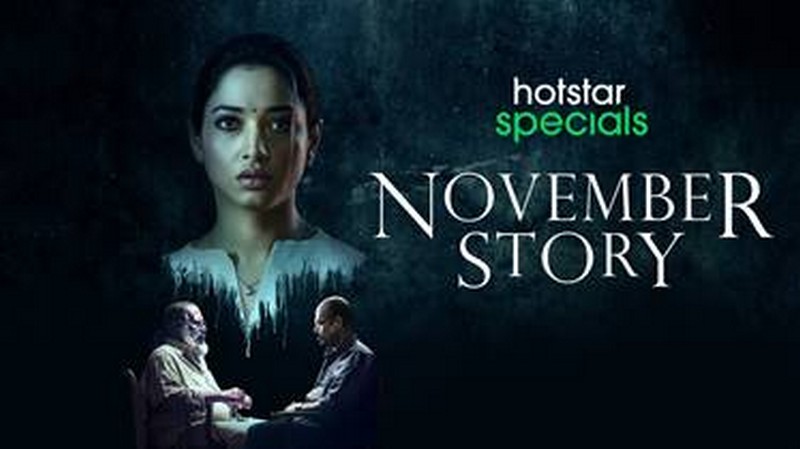 Did a crime writer brutally murder a woman?

Chennai, 6th May 2021: Anuradha is a young ethical hacker whose biggest worry at hand is selling her father’s house so she can pay for his Alzheimer’s treatment. Overnight, their lives take a dramatic turn: Anuradha finds her father Ganesan next to a woman’s dead body in that same house. A leading crime novel writer with symptoms of erratic behaviour, all the evidence points in Ganesan’s direction. A chain of shocking revelations unfold as Anuradha takes it upon herself to find the truth behind this murder. Who is this woman and what could have led Ganesan to committing this horrific crime? Is the writer even the killer, or can his daughter prove that he didn’t actually murder her?

Bringing alive this riveting murder case, Disney+ Hotstar VIP is set to launch its next Hotstar Special –  November Story – a crime thriller series that unveils the shocking story behind the horrid murder. Actor Tamannaah Bhatia brings her versatile talent to the series with the gripping portrayal of Anuradha, an ethical hacker who embarks on a quest to solve this perplexing case and save her father. Can she unravel the mystery behind the murder and save her father? A 7-episode whodunit, November Story features multilayered storytelling with flashbacks across time frames revealing the back story behind the murder. Directed by Ram Subramanian and produced by Ananda Vikatan Group, the crime thriller series stars an ensemble cast of talented actors that also include Pasupathy, GM Kumar, Aruldass and Vivek Prasanna among others. November Story releases this 20th May in Hindi, Tamil and Telugu on Disney+ Hotstar VIP.

Actor Tamannaah Bhatia said, “Anuradha is a young, independent, fearless and intelligent woman who takes it upon herself to save her father from being punished for a cold-blooded murder. Portraying such a strong female character who is the hero of the story was one of the most gratifying experiences in my career so far. With its compelling storyline and unique narrative, November Story will keep audiences on the edge of their seats and hooked till the end as the mystery around the murder is uncovered.”

Director Ram Subramanian said, “November Story is a classic murder mystery where the quest to find the truth behind the crime unveils a series of hidden truths. We wanted to bring the Tamil audiences a crime thriller unlike any other they’ve seen before, in terms of both the storyline, and the way it’s brought to life. All the actors have delivered extraordinary performances and I am confident that the unique theme and genre of the series will grab the attention of audiences, with the added advantage of Disney+ Hotstar VIP releasing it in Hindi, Tamil and Telugu.”

Srinivasan B, Vikatan adds “Vikatan’s very first OTT product November Story features a solid storyline, an array of stars including Tamannah, G M Kumar and Pasupathy. Tamannah has completely transformed herself to play Anuradha. G M Kumar’s portrayal of Ganesan keeps us guessing at every turn. And Pasupathy as Yesu steals the show with a performance of a lifetime. Debutant Ram who has penned and directed the series, has created a string of nail-biting plot twists that will keep you at the very edge of your seats. Over 4 years in the making, November story is one of grit, perseverance and a fight to the finish, for dignity.”

Ganesan is a reputed crime novel writer, suffering from Alzheimer’s, who lives with his daughter Anuradha, an ethical hacker. On November 16th, Anuradha finds her father in their abandoned house with the dead body of a woman, who has been covered in paint. As the police reach the crime scene, all evidence is pointing at Ganesan, however his daughter claims his innocence and embarks on a journey to unveil the truth. Can she find the real story behind the murder of this woman, or can she still save her father from being punished? Or, can an Alzheimer’s patient even be tried for murder?