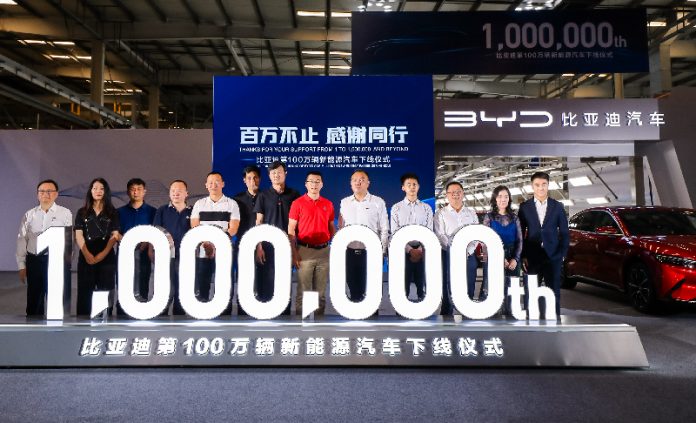 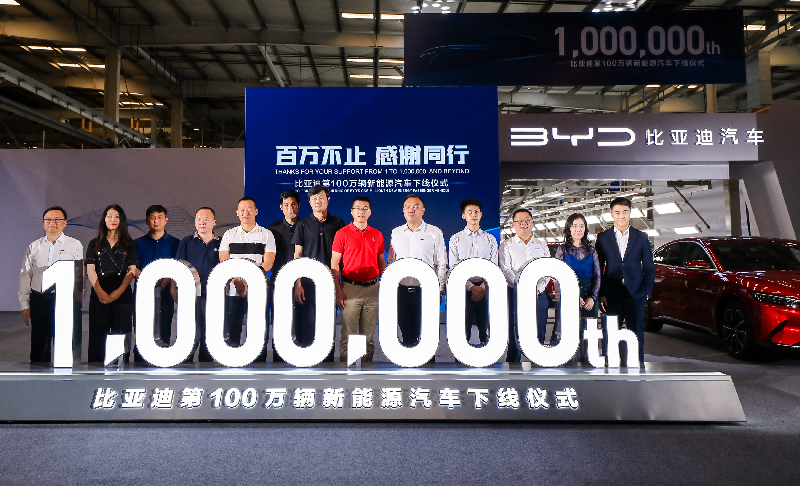 BYD is celebrating a significant production milestone by becoming one of the first new energy vehicle manufacturers globally to produce one million electric passenger cars. The one-millionth car, the Han EV, rolled off the production line today at BYD’s headquarters and manufacturing facility in Shenzhen.

At a special ceremony this morning, VIPs from government departments, industry associations, BYD’s partners and suppliers, more than 400 media guests, and about 100 BYD vehicle owners, gathered to mark the occasion.

The landmark moment in BYD’s history coincides with the announcement that the first batch of 100 pure-electric BYD Tang SUVs are now ready for delivery to Norway – with the Scandinavian country selected as the platform for BYD’s ambitious plans in the European passenger car market. BYD also announced that a total of 1500 Tang SUVs will be delivered to Norway before the end of the year as the company commits to accelerating its European and global strategies. The initial 100 cars are scheduled for delivery to Norwegian customers in the third quarter of this year. 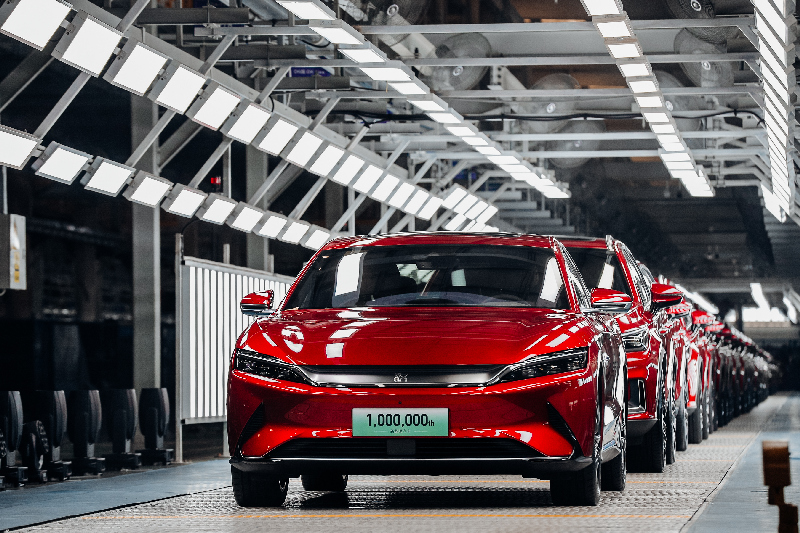 BYD’s pioneering work in the development of battery technology and new energy vehicle (NEV) manufacturing has led the new energy revolution in the global automotive industry since the company’s emergence in 2003 – spearheaded by innovative technologies and a well-calibrated global business strategy. In 2004, BYD unveiled its all-electric concept car, the ET, at the Beijing Auto Show, marking the premiere debut of an NEV model. This was followed in 2008 when the world’s first mass-produced plug-in hybrid NEV – the F3DM – was officially unveiled. Then, in 2020, the BYD Han was launched with performance specs setting twelve records globally and nine in China. The BYD Han continues to be a top-selling model in the mid-to-large luxury sedan sector, and with the credentials to rival models from the three German luxury car giants.

The one-millionth car, the Han EV, rolled off the production line

“BYD shoulders the responsibility and mission of upward development for China’s new energy vehicle brands,” said Wang Chuanfu, Chairman and President of BYD Co., Ltd. “From zero to one million vehicles, this is BYD’s response to the call for global auto industry transformation. It also sets a benchmark in the journey of the new energy vehicle industry in China starting from nothing, alongside the greater national journey for a country dominated by traditional automobiles to one that is a leader in the field of sustainability.”

“The journey to one million vehicles would not be possible without the support of car owners every step of the way,” he added, “and BYD recognises that the ‘green dream’ can only be achieved hand-in-hand with all our customers.”

With this close relationship with customers in mind, BYD has invited ten of its NEV customers to attend the ceremony, including the owners of the 100,000th and the one-millionth vehicles to join BYD as it celebrates its work in helping move towards a better, more sustainable future.

In the central square of BYD’s global headquarters, another eighty BYD car owners assembled their vehicles in a specially choreographed display forming the number ‘1,000,000’ to help celebrate the milestone.

At BYD’s global headquarters, car owners assembled their vehicles in a specially choreographed display forming the number ‘1,000,000’ to help celebrate the milestone 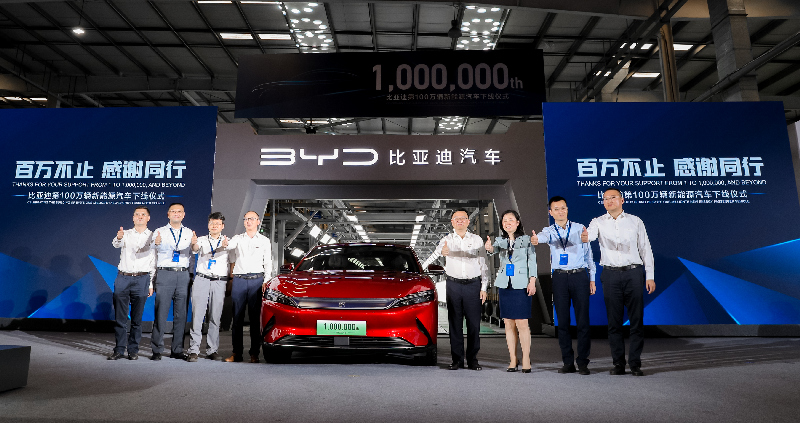 Alongside news of the production of its one-millionth passenger car line, BYD has also confirmed its entry into the European market with the first 100 pure-electric BYD Tang SUVs on their way to Norway. The northern European country has been selected to kick off BYD’s journey towards a successful presence in the burgeoning NEVs market in Europe.

With Rolf Petter Almklov, Commercial Counsellor, Royal Norwegian Embassy in Beijing, alongside Wang Chuanfu, Chairman and President of BYD, the first batch of 100 Tang SUVs will be shipped at the end of May and delivered to local customers in Norway during the third quarter of this year. Also before the end of 2021, BYD plans to deliver a total of 1500 Tang SUVs to Norway, underlining a significant commitment from BYD to its new Scandinavian market and its European neighbours.

With decarbonisation high on the political agenda in Europe, BYD’s entry into the passenger car market comes at an important time. The BYD Tang EV provides serious competition for the more established European brands, with its stylish design and new technologies providing a compelling proposition for new car buyers. Central to its technology credentials is the new ultra-safe, space-saving Blade Battery, with performance figures including a class-leading range of up to 505km (NEDC) and acceleration from 0-100 km/h in just 4.6-seconds from its 86.4 kWh capacity.

BYD describes its new business in Norway as the ‘start of the European dream’ with respect to its passenger car ambitions. A key differentiator for BYD is its commitment to bringing only pure-electric, 100% emissions-free cars to market – a strategy supported by BYD’s electric bus product range and its leading position in eBus markets right across Europe.

The key to realising BYD’s dreams has been the support of leading supply-chain partners. At today’s ceremony, Wang Chuanfu made special reference to ZF Friedrichshafen AG, Fuyao, Valeo and others, while stating BYD’s intention to join hands with even more partners in a joint endeavour to lead the transformation of the global automotive industry and to forge the way ahead for electrification.

The replacement of the internal combustion engine with new energy vehicles – and specifically battery electric vehicles – is crucial for reducing dependence on fossil fuels, ensuring national energy security, and further achieving the goal of ‘peak carbon by 2030 and carbon neutrality by 2060’. As a principal participant and major force in the new energy automotive industry, BYD will continue to work with partners, suppliers and customers, to push ahead and realise the dream of green travel.