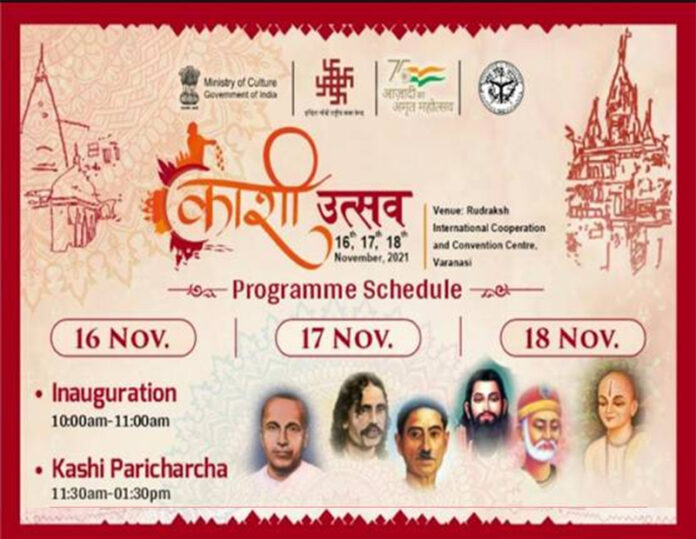 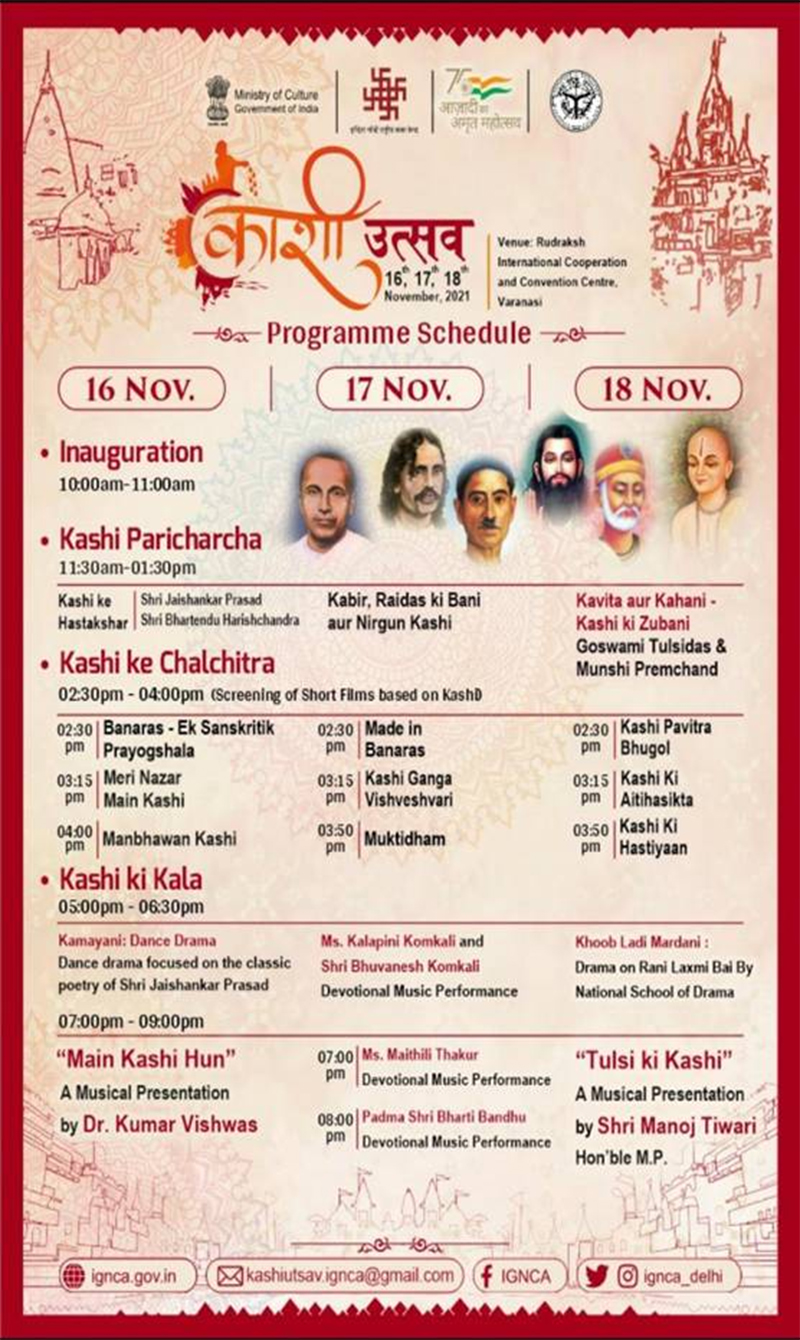 Kashi Utsav, a three-day festival is being organised in Varanasi to celebrate the classic heritage and culture of Kashi especially the centuries-old luminaries who are Goswami Tulsidas, Sant Kabir, Sant Raidas, Bhartendu Harishchandra, Munshi Premchand and Shri Jaishankar Prasad.  The programme will be organised at Rudraksh International Cooperation and Convention Centre, Varanasi from  16th – 18th November, 2021.

IGNCA is hosting the programme on behalf of the Ministry of Culture, Government of India, with the support of the Uttar Pradesh State Government and Varanasi Administration under the aegis of ‘Azadi Ka Amrit Mahotsav’, an initiative of the Government of India to celebrate and commemorate 75 years of progressive India.

Varanasi or Kashi has been chosen for this festival because of its rich cultural heritage and splendid history and resplendent beauty. The longest river of the India, Ganges flows through Kashi and is a source of inspiration for artists, scholars, writers of the city including the six legendary personalities who have been chosen for the event. The festival will help in exploring the magnificent aura of Kashi that gives birth to the legendaries of all times.

A theme has been dedicated to each day of the festival and these are: ‘Kashi ke Hastakshar’; ‘Kabir, Raidas ki Bani aur Nirgun Kashi’ and ‘Kavita aur Kahani – Kashi ki Zubani’.  The first day will focus on eminent literary figures, Bhartendu Harishchandra and Shri Jaishankar Prasad. The second day will highlight prominent poets, Sant Raidas and Sant Kabirdas and the final day will have Goswami Tulsidas and Munshi Premchand as focal points.

The event will emphasize these personalities from Kashi through panel discussions, exhibitions, film screenings, music, drama and dance performances. Eminent artists will be performing in the event. Dr. Kumar Vishwas will be presenting a performance on ‘Main Kashi Hun’ on November 16, 2021 while Shri Manoj Tiwari, Member Parliament will be delivering a musical presentation on ‘Tulsi ki Kashi’ on the final day. The festival includes several devotional performances by artists like by Ms. Kalapini Komkali, Shri Bhuvanesh Komkali, Padma Shri Shri Bharti Bandhu, Ms. Maithili Thakur.

A play based on Rani Laxmi Bai, ‘Khoob Ladi Mardani’, will be presented by artists from the National School of Drama (NSD) which has been directed by Ms. Bharti Sharma from NSD on November 18, 2021. Alongside another theatrical presentation will be made on ‘Kamayani: Dance Drama’ based on the classic poetry of Shri Jaishankar Prasad on November 16, 2021. The play has been directed by Shri Vyomesh Shukla from Varanasi. 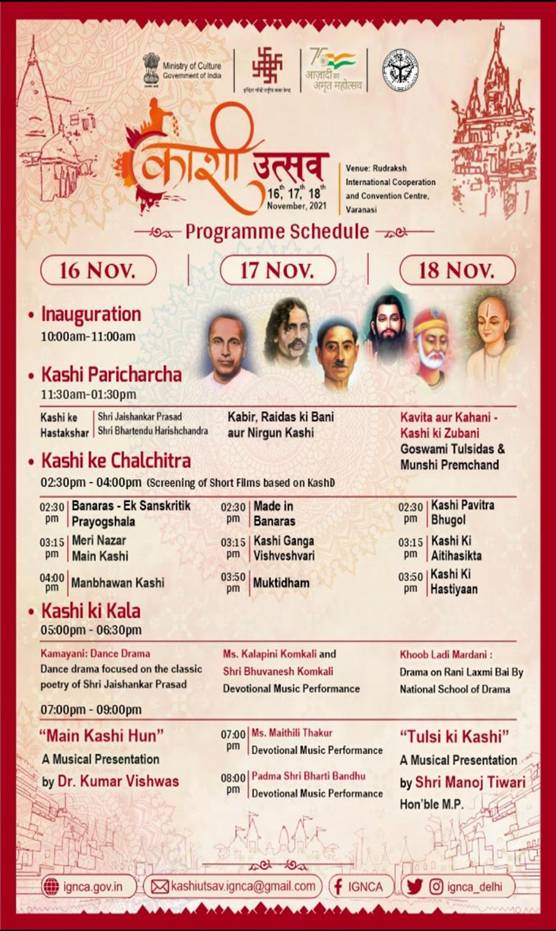 An exhibition of books and six literary personalities will be showcased in the festival; the themes of which have been planned and prepared by IGNCA and Sahitya Akademi, New Delhi.

In order to ensure maximum Janbhagidari, local artists, personalities and cultural scholars will also be invited to participate and present their views and thoughts either through videos or personally in the festival. 150 artists are participating in the event.

IGNCA wishes to dedicate this festival to the people of India, wherein role of each and every Bhartiya has been instrumental in the growth of Indian nation, be it culturally, economically, socially. Through Kashi Utsav, IGNCA is not only showcasing the glorious past of the nation but also generating the awareness that India and Indians have the utmost abilities to become a self-reliant (Atma Nirbhar) nation.